Will Iran be able to normalize ties with the West in 2022?

Even though both Iran and the US seem interested in reviving the nuclear deal, deep distrust and decades-long animosity mean both sides are unlikely to normalize their relationship in the near future, say experts. 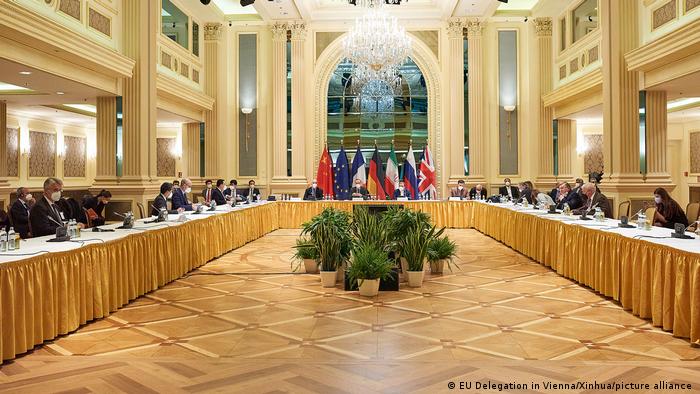 The window of opportunity to save the international nuclear agreement with Iran has shrunk to a matter of weeks, EU diplomat Enrique Mora warned negotiators in mid-December.

"Difficult political decisions have to be taken both in Tehran and in Washington," Mora, the talks' coordinator, said on Monday at the start of the eighth and possibly final round of negotiations in Vienna to salvage the deal, known as the Joint Comprehensive Plan of Action (JCPOA).

Time is running out fast before the 2015 deal becomes meaningless.

In 2018, then US President Donald Trump pulled Washington out of the deal and reimposed US sanctions on Tehran.

A year later, Iran started to violate many of the deal's provisions.

Tehran is currently enriching small amounts of uranium up to 60% purity — a short step from weapons-grade levels of 90%. Iran also spins advanced centrifuges barred by the accord, and its uranium stockpile now far exceeds the accord's limits.

Hard-liners call the shots in Tehran

Iran demands the US lift all the sanctions it imposed after 2018. The US, on the other hand, argues that not all of these sanctions were related to the nuclear program, particularly the ones that targeted senior members of the Iran's Revolutionary Guard Corps (IRGC).

They have become more powerful than ever since ultraconservative President Ebrahim Raisi took office at the beginning of August. Islamic hard-liners and IRGC commanders now occupy all the top posts and control all levers of power in the country.

Even though they say they want to save the nuclear pact for economic reasons, they reject normalizing ties with the West, particularly with the US, which hard-liners maintain pursues the goal of regime change in Tehran.

US-Iran relations have been severed since April 1980, just months after the fall of the shah and the occupation of the American Embassy by Islamist students loyal to Ayatollah Ruhollah Khomeini.

"The United States has taken a purely ideological approach toward Iran. They have remained faithful to this approach — except for a brief period under President Obama," Hassan Ahmadian, assistant professor of Middle East and North African Studies at the University of Tehran, told DW.

"After the 1980s, Iran pursued a solution-oriented policy toward the US at various stages," he said.

For instance, during Bill Clinton's presidency, Iranian President Ali-Akbar Hashemi Rafsanjani — who was in office from 1989 to 1997 — tried to normalize ties with the United States. He paved the way for American companies to enter Iran and made enticing offers to some major corporations, Ahmadian said.

But due to the efforts of the anti-Iran lobby in Washington, US Congress passed the the "Iran Foreign Oil Sanctions Act" in 1995, which sanctioned foreign investment in Tehran's energy sector. Clinton signed the measure into law in 1996, Ahmadian pointed out.

Likewise, under Iranian President Mohammad Khatami, who served from 1997 to 2005, there was hope that his initiative for a dialogue of civilizations and also unofficial cooperation with the US in Afghanistan and Iraq would pave the way for the normalization of relations, Ahmadian said. "But the US administration under President George W. Bush labeled Iran as part of the 'axis of evil,'" in the wake of the September 11 attacks.

Nuclear bomb for the Islamic world?

Iran's secret nuclear program was one of the major reasons for the country being placed in the so-called axis of evil.

For instance, there were reports of repeated meetings between IRGC commanders and Abdul Qadeer Khan, regarded as the "father of Pakistan's nuclear bomb."

Khan, who died in Islamabad in October 2021, was hailed as a national hero in Pakistan for transforming his country into the world's first Islamic nuclear power but was disgraced globally for having smuggled nuclear secrets to states including Iran and North Korea.

Iran's Rafsanjani said in an interview with the state news agency IRNA in 2015 that he would have liked to met Khan if he had the opportunity.

"Khan believed that the Islamic world must also have nuclear weapons, and he helped us a little bit at the time," Rafsanjani said. He admitted Tehran had considered possessing nuclear weapons in the past although it now officially rejects them as "un-Islamic."

Calling the 2015 agreement with the West a success, Rafsanjani said 90% of Iranians were fed up with confrontation with the West and they just wanted a better life.

British FM Liz Truss: "This is the last chance for Iran"

During his term in office, Obama publicly stated that his administration was not pursuing regime change in Tehran.

After the moderate Hassan Rouhani was elected as Iran's president in 2013, Obama offered Tehran a chance for a fresh start and a way out of international isolation.

The efforts helped the world powers to strike the JCPOA deal with Iran toward the end of Obama's second term.

However, Obama lacked sufficient political capital to permanently alter the US strategy toward Iran.

In 2016 — after the signing of the nuclear agreement — he extended the 1996 Iran sanctions act for another 10 years.

His successor, Donald Trump, then unilaterally pulled out of the deal, despite attempts by the international community to prevent the US withdrawal, and his own government's repeated certifications that Iran was sticking to the rules of the agreement.

Efforts by the other signatories to the agreement, like the European Union, to salvage the deal with guaranteed economic benefits for Iran, also failed.

The threat of US sanctions has prevented foreign firms from doing business with Iranian entities, hindering the nation's integration into the world economy.

Still, the US currently has few options left to stop Iran's nuclear program, barring perhaps the use of military force, which risks triggering a new war in the Middle East.

"President Biden seems to have a serious interest in resolving the nuclear issue with Iran through diplomacy and is not seeking another military conflict in the Middle East," said Negar Mortazavi, an Iranian-American journalist and political analyst based in Washington, DC.

"But unlike the Obama administration, the Biden administration does not seem to have a long-term strategy of diplomacy with Iran," she added.

At the moment, both countries do not seem to want to achieve more than a return to the nuclear agreement.

"While both sides are interested in reviving the JCPOA, I think that will be the ceiling of their engagement because the decades-long animosity and mistrust between Tehran and Washington runs deep and is supported by powerful political forces in both countries, I don't expect to see a dramatic change in US-Iran relations in the next few years."

Iran's Foreign Ministry calls for 'will to achieve a good agreement'