Will Cologne soon have its own Jewish UNESCO World Heritage Site? | Culture | Arts, music and lifestyle reporting from Germany | DW | 10.11.2020

Will Cologne soon have its own Jewish UNESCO World Heritage Site?

It is the oldest historic Jewish neighborhood north of the Alps. The City of Cologne now wants to turn this little quarter into a UNESCO World Heritage Site in coming years. 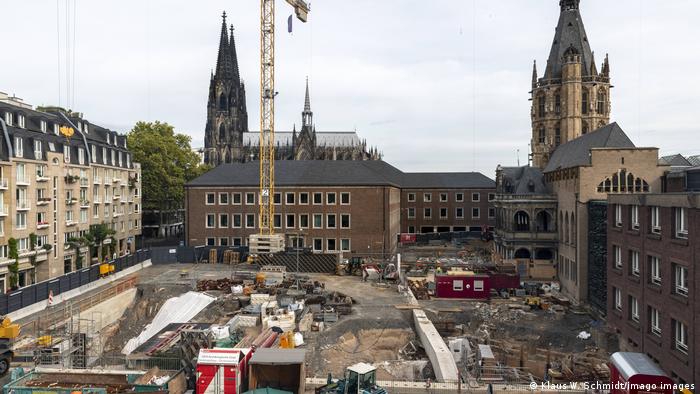 The "Kahal Kolonia" dates back to the 11th century as the oldest Jewish community situated north of the Alps. Today it is located right in the center of Cologne; in the Middle Ages, this was one of the most important large cities in the world — a bustling commercial metropolis.

Archeologists are piecing together what the neighborhood was like a millennium ago. In addition to digging up structures like the synagogue, there are also smaller artefacts found here that provide an insight into Jewish life in the Middle Ages.

The discovery of slate tablets at this site in 2011 marked the beginning of a journey that, locals hope, might culminate in the quarter being declared a UNESCO World Heritage Site in the future. Discovering slate in archeological diggings around this part of the world is nothing unusual at all, as rooftops here have been covered using this material since the Middle Ages. But these tablets were inscribed with ancient Hebrew letters.

Some feature names of people and amounts of money that hint at local trade among all kinds of citizens. These names, however, appear to have been Germanized as they do not correspond with the official list of names registered at the synagogue. 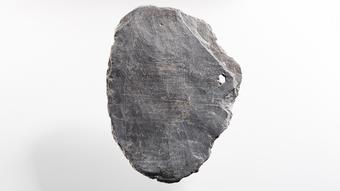 The excavations have given new insights into the peaceful coexistence of Jews and Christians during the Middle Ages. A new museum called MiQua, pegged to open in the coming years, now plans to document the extraordinary history behind "Kahal Kolonia."

Thomas Otten, the head of the MiQua museum, says that the artefacts prove that "in everyday life, the Jewish community hardly differed from the Christian population at all. They used the same kinds of kitchenware and wore the same kinds of clothes as long as they didn't need to dress for rituals held at the synagogue. They also used the same lamps and much more," he told DW.

This peaceful coexistence of Christians and Jews — who, according to Otten's estimates reached numbers of up to 1,000 local residents in the 12th and 13th centuries — appears to have run smoothly for a long period of time in the Middle Ages.

The shift that occurred as seen in the pograms beginning in the 14th century and the persecution of the Jewish community are also evidenced in a small, yet significant archeological artefact found at the Rathausplatz square in Cologne: a golden earring.

Archaeologists have doubts that such a valuable piece of jewelry dating back to the goldsmithery of the 10th or 11th century would simply get lost so carelessly. More likely, they reckon, is that it was hidden away out of fear of looting. All Jews were ultimately driven out of the city in 1424.

It will still take a while until the public can actually trace these stories of Jewish life in the city. Originally due to open its doors in 2021, the opening date of the "MiQua — LVR-Jüdisches Museum im Archäologischen Quartier Köln" at the Rathausplatz in Cologne has been postponed until 2024. But the outline of the building should be finished some time in 2021, according to Otten.

The completed museum will take visitors both above and below ground, connecting visitors with the archeological site itself. But for the time being, archeologists continue to dig for and unearth further artefacts, while making sure that the site is safe for the public.

"There is still a lot of restoration work to be done to make the whole place suitable for future visitor traffic," Otten told DW.

A second — and third — UNESCO World Heritage Site in Cologne?

Cologne's most famous building — the Cologne Cathedral — was recognized as a UNESCO World Heritage Site in 1996. And there's an application being processed for a second culturally important site in the city: discovered amid the rubble left of the city of Cologne at the end of World War II, the foundations of the ancient Roman Governor's Palace are currently undergoing the vetting process that could culminate in another UNESCO site being declared in Cologne next year.

If the MiQua museum succeeds with its ambitions of likewise gaining the same kind of recognition, Cologne could within a few years boast three UNESCO World Heritage sites.

But there's still a long way to go for MiQua. First, the Jewish quarter has to be nominated and qualify at regional level in the state of North Rhine-Westphalia, which is pegged to next year. Then, in 2023, the new museum would have to compete with other sites across the country, and by 2025, it could start to be considered by UNESCO.

Thomas Otten considers the prospect of being eventually recognized by UNESCO as promising. He says this is a medieval Jewish quarter "which we have managed to capture in its full archaeological essence, in its tradition, in its entirety, including the urban topographical aspect with its public and private buildings, the whole municipality that used be the so-called 'Kahal Kolonia.'"