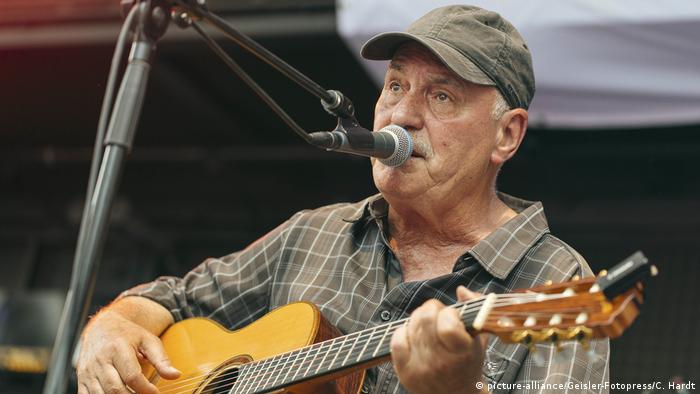 "A clown nose on your face, a kippa on your head: Shalom Alaaf Shalom! Christian or Jew, we all go crazy today. Hevenu Shalom Alechem — We want peace."

You can listen to Rolly Brings' song on Germany's Deutschlandfunk Kultur  radio station. Please fast forward to the time code 07:19 minutes to catch this recording of "Shalom Alaaf." 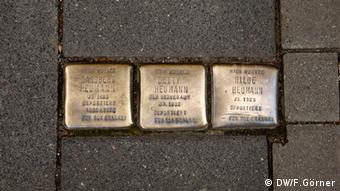 Some 2,000 "Stolpersteine" (stumbling blocks) have been cemented into sidewalks in Cologne to commemorate persecuted Jews who lived in Cologne

Brings, who has written many songs about the persecution and murder of Jewish Cologne citizens over the past decades, would like to look ahead with his new song: "It was time for me to write a song for us and for the Jewish men and women living with us, a song that gives courage to stand up together for love and life in a colorful, lively and liberal democracy, and thereby showing the anti-Semitesand right-wing extremists that they have no chance against us democrats.” Rolly Brings said that there is no event better suited for this than Cologne's carnival celebrations. And he is not alone. 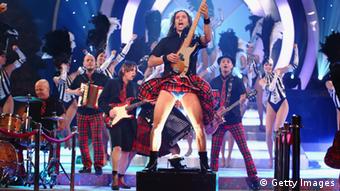 The rockband "Brings," with Rolly Brings' sons Peter and Stephan, is one of Cologne's most popular bands

More and more Cologne musicians are taking to the carnival celebration stages and voicing clear messages. Among them are Brings' sons Peter and Stephan, who spark a party mood with "Brings," a successful rock band that sings in Kölsch, the local dialect. Their language is clear: "Sometimes we're white, sometimes we're black, but when it gets too brown, there's a ruckus!”

A young newcomer band with a darker-skinned singer is praised for the song "Heimat," about the fact that people with a darker skin color can also be true Cologne locals. With her women's band "Beerbitches," the popular German comedian Carolin Kebekus shouts out loud and clear to people voicing right-wing slogans: "Leave me alone!"

Arsch Huh, a collective of musicians and activists, use the song "Su läuf dat he" (That's how it works here) to voice their protest of the use of Cologne locals' songs about homeland and cohesion at events of the AfD party, Pegida and other right-wing and right-wing populist groups. "Su läuf dat he" is one of the most popular songs of the 2020 carnival season. 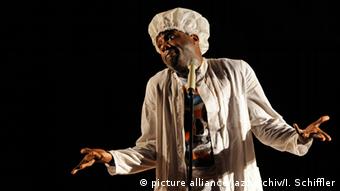 Rolly Brings is not surprised: "Over the last few decades, a Kölsch music scene has established itself in Cologne that reacts extremely sensitively to social events, which always have political and social repercussions. It is clear that many — even very popular bands — make either clear statements against fascism, xenophobia, racism and anti-Semitism at public appearances — or clearly sing in praise of life and love —  and against hate — in their lyrics."

How does that go down with official carnival associations? The traditional clubs are said to have a certain rigidity, but that has been changing over the past few years. Traditional carnival societies have also been trying to rejuvenate themselves, and they need the music of Cologne bands for their events. So artists who openly take a political stance are also being invited, giving traditional clubs, a younger, more modern appearance.

To Rolly Brings, this is a positive development: "A well-made and rousing song in the carnival festivities that stands for a colorful, liberal, tolerant and peaceful coexistence, sets a clear signal — and this signal has an effect on the image of carnival associations." 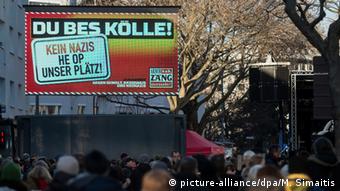 Various anti-fascist demos in Cologne, such as that of Cologne musicians

Every year, the Cologne carnival has a special motto. Most often, it is harmless, with a lot of feel-good songs. Rolly Brings' son Peter suggests a political motto for next year: "No Kölsch for Nazis." The slogan was proclaimed by many Cologne pub owners and people active in the cultural scene back in 2008, when marches by right-wing radicals were announced in Cologne.

Peter Brings gets a lot of praise for his suggestion, but some officials find it too progressive: They think it's good but don't want to be pushed in a political direction with such a motto.

But carnival is political — as evidenced by the floats in the Rose Monday parade. Rolly Brings is convinced that a statement against nationalism, xenophobia and anti-Semitism has to be made and, at the same time, that one must speak out to promote tolerance and peaceful coexistence. It is "a good, correct and important signal both internally — to a city, region, or country — and externally — to Europe and the rest of the world," he says. Carnival in Germany, he adds, is exactly the right event to speak out against old and new Nazi ideologies: "We, the Brings family, have not forgotten where this once led: dictatorship, terror, war, mass murder."

When toxins get into our bodies, we vomit. Whether it's a virus, bad food or drink, or drugs, we vomit. It's survival instinct. A natural reflex that rids us of poisons. But not all mammals are so lucky. What do they do? (19.02.2020)

There is no need to panic about coronavirus. But we also shouldn't take unnecessary risks by bringing together tens of thousands of businesspeople from around the world, says Fabian Schmidt. (13.02.2020)

Revelers are protesting the decision not to consider two women for Carnival couple of the year in southwestern Germany. Heiko II and Ute I were "sadly excluded from the selection process" in the state of Saarland. (16.01.2020)