When toxins get into our bodies, we vomit. Whether it's a virus, bad food or drink, or drugs, we vomit. It's survival instinct. A natural reflex that rids us of poisons. But not all mammals are so lucky. What do they do? 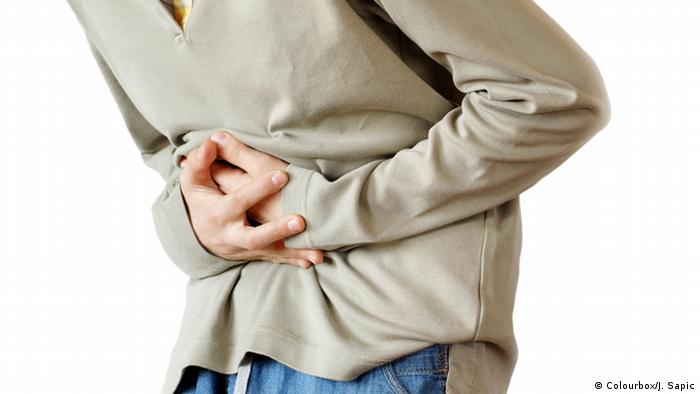 Toxins in, toxins out. That's how humans like to roll. When the going gets tough, we vomit. It's a survival tactic that sets us apart from other mammalian species, such as rats and mice, who simply can't vomit.

Whether it's by the misfortune of sitting next to a sneezing, sniffling traveler on a train, inadvertently eating moldy food, or through drink and drug abuse, the human bodies knows when it's time for our natural survival instincts to kick in.

We all know how it feels. First, there's that a sense of disgust or nausea. A cold, sweaty sensation that's both mental and physical. When the blood drains from your face and your mouth fills with saliva. Then comes "emesis." That's when that gut-wrenching pain and muscular contractions turn into a moment of release, sending gastric fluid and bits from the small intestine up through your mouth and, occasionally, your nose.

Nausea and vomiting can be truly unpleasant, but they are a natural defense mechanism that we're lucky to have. Not only does vomiting rid us of toxins, but all that build-up is important too, right down to a flood of saliva, which protects the throat and teeth from corrosive, acidic stomach contents.

But not all creatures can help themselves in that way. Frogs and sharks can't vomit, so they turn out their entire stomachs.

Chances are a good few revelers will willingly reacquaint themselves with this feeling during the international carnival season… and then keep drinking. Well, that's up to them. But it does leave an awful mess, all those puddles of "street pizza" teeming with the previous night's exploits, and one question: Does vomit spread viruses?

"So long as you don't touch it, it shouldn't be an issue. And it's important to remember that not all vomit is contaminated with viruses," says Dr. Catherine Makison Booth, a microbiologist at the UK's HSE Science and Research Centre.

But you might still want to be careful. Makison Booth says workers, whose unfortunate job it is to mop up the sick, should perform a risk assessment to identify "the appropriate personal protective equipment to wear before doing cleaning it up."

Dr. Makison Booth has good reason to recommend such caution. She has studied the spread of viruses through vomit, using the HSE's now-world famous human model, Vomiting Larry. Makison Booth has focused on norovirus, which causes vomiting and diarrhea.

The Causes of Motion Sickness

And while she cautions again that the potential for viruses to spread depends on the "differing number of viruses in different peoples' vomit and environmental conditions, like temperature and humidity," she describes this worse-case scenario.

"I used 1 million virus particles per mL of fluid in Vomiting Larry based on a research article I found by E.O. Caul [Hyperemesis hiemis—a sick hazard]. Caul used an electron microscope to show that as many as 30,000,000 viruses could be present in a 30 milliliter bolus of vomit. It is thought that as few as 10 norovirus particles could be enough to elicit an infection and as such you would only need to ingest 10 nanoliters of vomit, assuming that many viable viruses were present in it," wrote Makison Booth in an email to DW.

"So, if you shared out 1 milliliter of norovirus-contaminated vomit equally between individuals it could directly infect 100,000 people, and that's before they start to shed norovirus particles themselves and infect others. It should be noted here that this is highly unrealistic," she says.

Rats are a special focus for emesis researchers, because while rats can't vomit, they have found certain work-arounds. They either learn to avoid toxins or use a strategy called pica. That's when they eat non-nutritional substances, like clay and dirt, to dilute the toxins.

But why can't rats vomit? Rats have a highly-resistant barrier between the stomach and the esophagus, which essentially creates a one-way system. Once the toxins are in, they stay in. Rats lack the muscular strength to reopen the hatch and reverse the flow of food or fluids. They also lack the neural connections that they would need to control the muscles that are needed for vomiting — if, indeed, they had those muscles at strength.

So, they tend to avoid tastes they know to be dangerous or ones they don't know at all. "Rats survive by an extreme wariness of new foods, or neophobia," says Professor Linda Parker, a behavioral neuroscientist at the University of Guelph, Canada.

"If the food makes the rats sick, future encounters with the taste will trigger a conditioned gaping response, which appears to represent nausea in rats," wrote Prof. Parker in an email to DW.

Parker and her team have studied this behavior, using tastes and places that were paired with both "rewarding" drugs, such as amphetamine and cocaine, and nausea-inducing drugs, such as lithium chloride.

"Strangely, rats will learn to directly self-administer a rewarding drug," says Parker. "But they will avoid a taste with which it is paired. Any change in the hedonic set point (sic), good or bad, makes rats avoid a taste."

So, if the rat thinks the taste is responsible for changing they way they feel — either physically or their "state of mind" — it will avoid it.

But stranger still, Parker's research also suggests that rats can differentiate between those "rewarding" drugs and those nausea-inducing drugs. When re-exposed to amphetamine, rats don't gape, but they do for lithium chloride. 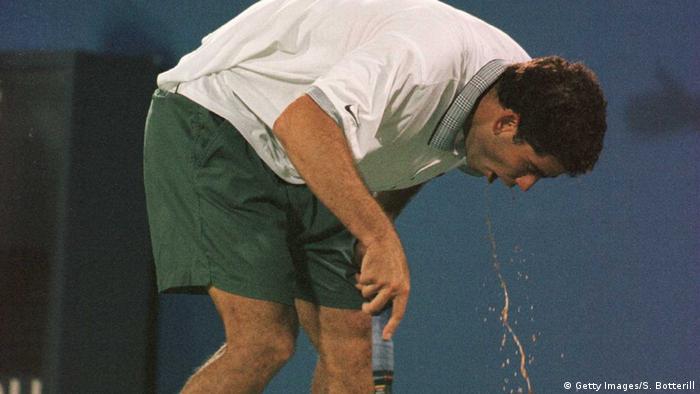 We vomit for a range of reasons. Here, former tennis star Pete Sampras vomits during the 1996 US Open

Now, whether you're a rat, shrew or human, ridding your body of toxins can save your life. But we don't only ever want to vomit because our lives are at risk.

Sometimes we're merely responding to a random sickly smell, perhaps it's a waft of sewerage or someone else's vomit. It may just be air travel, where the levels of oxygen are poor. None of that will kill you per se, but you may still feel nauseous.

Some have suggested that spitting or swallowing the excess saliva that builds up in your mouth before your vomit can stop your vomiting. But don't try that if your body is telling you it really needs to be sick.

There are "anti-emetic" drugs that can control vomiting, although the nausea remains — the body still wants to react, to throw out some foreign object or feeling. But there are situations such in chemotherapy where patients would welcome the relief.

As a result, Parker and her fellow researchers are studying "endogenous cannabinoids," naturally occurring chemicals in the body which may play a role in controlling nausea and vomiting.

It's a young area of research and one that tends to face social and political opposition due to non-medical uses (and abuses) of cannabinoids. But they could prove useful here and in other areas such as in treating dementia.