Why UK climate activists are locked in a ′dangerous′ self-dug tunnel under a London station | Global Ideas | DW | 18.02.2021

In a bid to halt a high-speed rail project, protesters are camped out in a precarious and cramped tunnel underneath Euston Station. But the UK government says the HS2 train line is vital to reach climate goals. 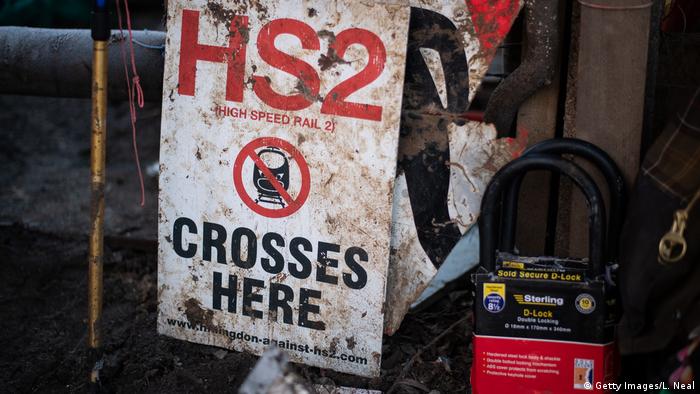 Beneath London's Euston Station, climate protester Blue Sandford is chained by the ankle in an illegally dug tunnel. The tunnel, 12-feet (3.6 meters) deep and 100ft long, is wet and muddy. It is propped up by wooden frames: in places wide enough only for them to lie flat on their stomachs.

The 18-year-old is resisting UK authorities as they try remove her and other protesters.

Under the cover of a tent, the "Stop HS2" activists spent two months secretly digging the tunnel with shovels and buckets before going public and locking themselves inside on January 27. 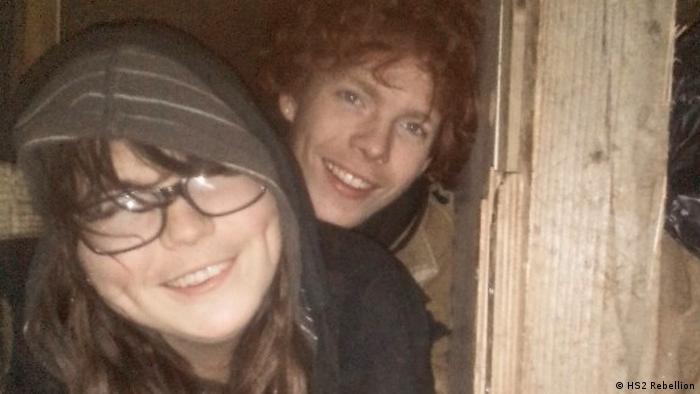 Blue Sandford and her bother Lazer Sandford in a tunnel dug in secret underneath London's Euston Square Gardens, which they say is at risk from the HS2 railway project

They're protesting Britain's High-Speed 2 railway project (HS2), which involves clearing ancient woodland to make way for tracks and other rail infrastructure. It will also mean redeveloping Euston Square Gardens, a park in front of the station, they say.

"We're in serious debt here, the whole world, in terms of carbon and gas and methane. We need to start planting trees, not cutting them down," said Sandford, speaking on the phone to DW from the tunnel.

Four of the tunnellers, including Sandford's brother Lazer, have been either forcibly removed, or left voluntarily. Lazer had encased his arm in a steel tube that was surrounded by concrete and had to be drilled out. At least three more remain, despite fears the makeshift passage could collapse. For the protesters, the stakes are high, because this represents the larger fight to halt climate change.

"I'm here because we're facing societal collapse, and wars and famine and drought on a scale that we've never seen before and I'm really terrified for my future," said Sandford, who has also taken part in the Extinction Rebellion protests, in a recorded message before the authorities arrived. 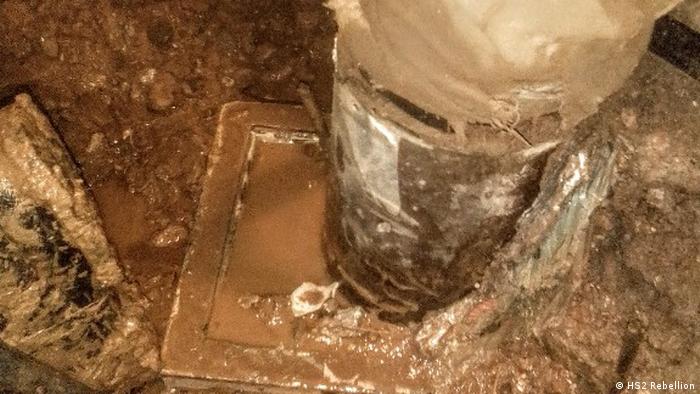 The railway will allow high-speed trains to travel along their own tracks, freeing up the existing rail network for more local services with the aim of reducing cars on the road. HS2 says its trains will offer cross-country travel with seven times lower emissions than cars and will carry freight to reduce high-polluting truck journeys.

Sustainable transport advocate and independent railway engineer Gareth Dennis says it is a vital part of the UK's plan to cut emissions and is being unfairly tarnished.

"We're hearing nothing about all the motorways and roads that are being built across the country, causing a huge amount more damage. There are bulldozers, diggers, tree felling, right now, with nobody digging a complicated set of tunnels in protest," said Dennis.

One point of contention is how long it will take for emissions from the construction and operation of HS2 to be canceled out by the benefits of greener travel. In 2019, the government's own commission, the Oakervee Review, estimated that it could take 60 years of operation.

Adam Turner from Greens4HS2, a group of Green Party members who support electrified high-speed rail to achieve a net zero-carbon future and are at odds with the party's official position opposing HS2, said that though 60 years is not ideal, the UK must think about the bigger picture. (Net zero means reaching a balance between the greenhouse gases pumped into the atmosphere and those taken out.) 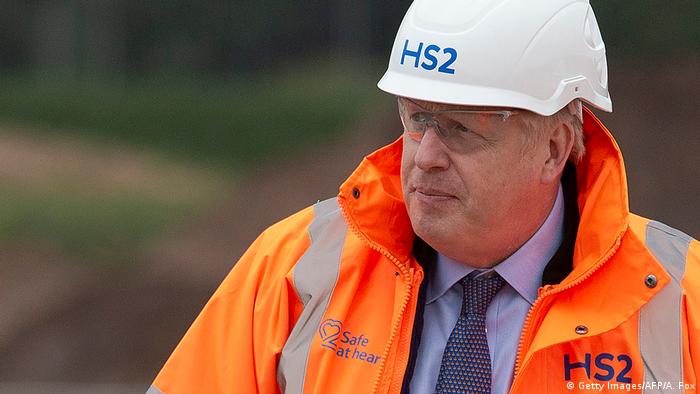 Britain's Prime Minister Boris Johnson during his visit to the Solihull Interchange construction site for the HS2 high-speed railway project, near Birmingham

Greens4HS2 carried out an analysis showing the estimate could be reduced to 28 years "if government is assertive in driving people away from planes and cars, onto trains," added Turner.

But the protesters claim it will take much longer, as they believe estimates involved are skewed in HS2's favor, and do not take sufficient account of the likely increase in electric cars.

The emotive heart of the debate is over the ancient woodlands that have been felled to make way for new tracks.

Farmer Penny McGregor saw a local woods near Birmingham, a city in the English midlands, repossessed by HS2, and partially chopped down in 2020. She said the community treasured the area as a sanctuary full of birdsong and wild anemones, but she watched it get destroyed.

"It was all very traumatic that whole time," said McGregor. "I could hear the chainsaws every morning from the house. It's horrible. People on the footpaths said they could hear trees crashing."

HS2's critics point out that 13% of the UK is woodland, compared to more than 35-40% in the EU, and say the project's destruction of pristine woodlands is unacceptable.

Major parties on the left and right of British politics, including the Green Party and the UK Independence Party (UKIP), have also campaigned against HS2 due its cost and environmental impact. In 2019, the Green Party labeled it an act of "ecocide" that would cut habitats in half.

But advocates of the high-speed project call for more perspective, saying that just 43 out of 52,000 ancient woodlands have been affected, and that HS2 are planting seven million new trees to offset carbon emissions, all of which are native species specially picked by a leading UK tree nursery.

The project will cost a tiny fraction of the UK's tree coverage but is necessary to slash emissions, said Adam Turner from Greens4HS2. 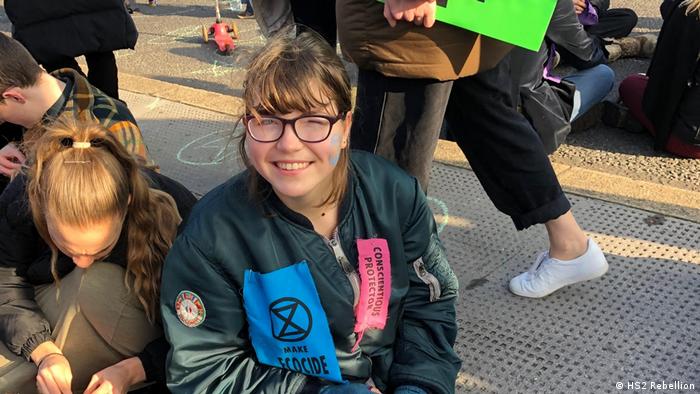 Blue Sandford has been dubbed 'Britain's Greta Thunberg' and has taken part in the school climate strikes, as well as Extinction Rebellion protests

For now, neither HS2 nor the protesters are deterred. The first phase of HS2 from London to Birmingham will be completed by 2031, with the second phases to Manchester and Leeds finished in 2040.

But the activists have warned there will be more tunnel protests to come.

Blue Sandford remains in the tunnel and could face criminal prosecution for her part in the protests. But she feels she has little choice.

"I don't want to be so scared that I have to risk my life. But I feel like I don't have a choice," she said. "Voting hasn't worked. Letters to MPs haven't worked. This is the only thing I can do."

Britain's new Prime Minister Theresa May has scrapped the UK's climate ministry and appointed a climate skeptic as environment minister. In a post-Brexit world, Europe's climate protection policy could be in trouble.

Living Planet: Not as simple as 1 trillion trees

Are e-cars as green as they seem?