Why the world is watching Israeli TV series

It may be a tiny country — of just 8.8 million inhabitants — but Israel is a powerhouse of international television. Beyond the hit series that inspired "Homeland," the latest TV trend explores ultra-Orthodox life.

Homeland — the golden globe-winning political thriller starring Claire Danes as the driven CIA agent Carrie Mathison — was adapted from the Israeli series Prisoners of War, and HBO's In Treatment — starring Gabriel Byrne as a psychotherapist who questions his own abilities — was a near one-on-one translation of the Israeli original, BeTipul.

What sets Israeli series apart is not their budgets — Prisoners of War creator Gideon Raff notes that the whole first season of his Israeli show cost less than a single episode of Homeland — but the kind of stories they tell. And the way they choose to tell them.

Take Fauda. The drama, about a team of undercover Israeli operatives hunting Palestinian terrorists across the West Bank, is the opposite of escapist TV.  Fauda — Arabic for "chaos" — shows the messy, nasty and morally complicated world of Israeli-Palestinian conflict. Fauda's Israeli "heroes" are capable of torture and worse. Its Palestinian "villains" are also depicted as loving and kind.

It's a tribute to the show, which streams on Netflix worldwide, that it has been condemned as biased by both sides. Far-right militants in Israel have attacked the series for "humanizing" terrorists, while the pro-Palestinian Boycott, Divestment and Sanctions (BDS) movement has called on Netflix to drop the show, calling Fauda "racist propaganda."

"No one believed in it. Even in Israel. Everyone was afraid of that show. People thought it was too much like the news," says Leora Kamenetzky, a writer on the first season of Fauda. "And they thought the audience in Israel wouldn't want to hear so much Arabic."

Instead, Fauda was an instant hit. The most successful show in the history of Israel's Yes satellite network, it swept the Israeli television awards, the local version of the Emmys. A third season of the show — the first specifically targeting the international audience — is currently in production.

"I think living in Israel is living in conflict every day," says Kamenetzky, when asked why so much great TV drama has emerged from such a tiny country. "It is not just the Israeli-Palestinian conflict, it is conflict between people, it is conflict between different members of society. And I think from the day we are born, we experience conflict. And conflict is the building block of drama. I mean, have you ever seen two Israelis arguing over a parking spot? It can end up in murder." 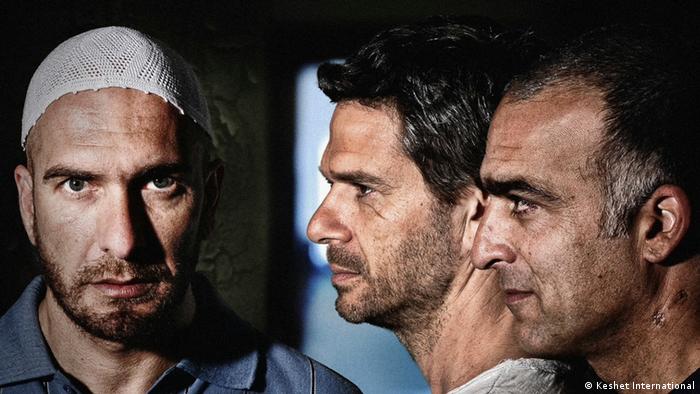 No fear of taboos

Israeli writers have also shown a fearlessness when it comes to addressing taboo topics. Gideon Raff used news stories about Israeli soldiers released after years in terrorist captivity as the jumping-off point for Prisoners of War. "We all knew about these Prisoners of War, but no one was talking about them," he said.

Lior Raz, who co-created Fauda with Israeli journalist Avi Issacharoff, and who plays the lead character, Doron Kavilli, was himself a member of an undercover commando unit known for posing as Arab terrorists. His own girlfriend was killed in a terrorist attack in Jerusalem.

Real-life political cover-ups and conspiracies inspired the fictional story behind False Flag, which Kamenetzky co-created with writers Maria Feldman and Amit Cohen. In the series, five apparently ordinary Israelis, all with dual nationality, wake up to find themselves accused of terrorism, their names and faces plastered over every TV set and news-site. The series, currently in its second season, airs on Fox International Channels worldwide.
"In Israel, reality is so strong, it is almost like a fantasy," says Kamenetzky. "Sometimes it feels like you need to dilute it a little bit to make it believable TV."

Politics isn't the only source material for new Israeli drama. Writer/director Keren Margalit drew on her own experience, as the mother of an autistic boy, to create a series about raising a child in a society where there is little support for, and little mention of, mental illness. The show, Yellow Peppers, was adapted in English as The A Word, the first foreign-language series to be adapted by the BBC. A US version, as well as one for Greek and Dutch TV, are in the works.

Margalit believes Israeli creators have made a virtue out of their necessity to make television on a shoestring budget. "We don't have money for anything," she says. "So the understanding is, if you can't go wider, if you can't explode anything or go big with special effects, you need to go inside. To go very very deep and find real characters. I think a lot of Israeli television developed from this understanding."

Similarly, because studio space is at a premium in Israel, the majority of series are shot on location, giving the shows a raw, authentic feel.

Yellow Peppers was shot almost entirely in the countryside — the show is set in a rural village where families have no access to therapeutic resources for autistic children — and its most striking scenes involve the autistic boy, played by Michael Zapesotsky, walking through the dusty landscape wearing a yellow backpack and big over-the-ear headphones. Yellow Peppers aired just before the Israeli masquerade celebration of Purim.

"I went down to the street during Purim and found like 12 costumes of the boy with the yellow backpack and the headphones," said Margalit. "And I almost cried, I thought every kid in Israel thinks it is really cool to be this autistic boy... that's where you see the power of television." 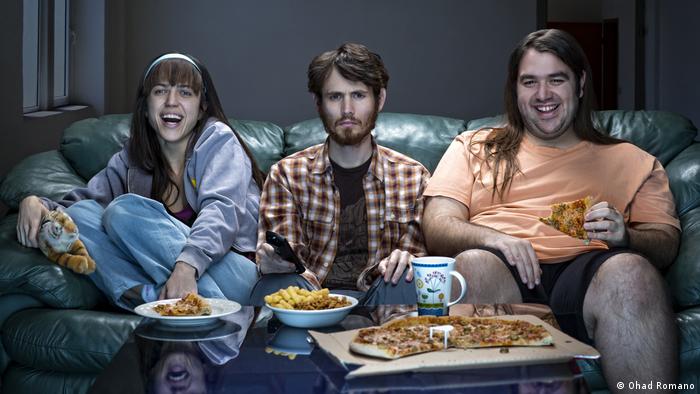 'On The Spectrum' is about three roommates with autism

Yellow Peppers opened up a discussion of mental illness in Israel, and led to several new dramas tackling the subject. On The Spectrum, about three adults living with autism who are trying to live on their own, was the big winner of this year's Israeli TV Awards, picking up 10 prizes, including for best series. Danna Stern, one of the show's producers, says requests from Israeli companies to a foundation that places autistic workers in jobs, jumped tenfold after the series aired.

What Stern, and other Israeli TV producers, aren't trying to do is to copy the rest of the world. "We do less cop procedural shows and no hospital shows," she says. "Americans can do those better than we can. But we can really do shows that resonate from here. What works for us is when a show is hyper, hyperlocal."

The latest hyper-local TV trend to come out of Israel is Orthodox drama.

Shtisel, which airs on Netflix, is a gentle love story about an ultra-Orthodox man who falls for a divorced woman — the kind considered damaged goods within his community.

The drama Kipat Barzel (Iron Yarmulke) follows three ultra-Orthodox young men who defy their traditions and choose to do military service with the Israeli Defense Force.

Srugim (Knit), which Amazon Prime has picked up, is the Orthodox take on Friends, a comedy about six single Orthodox Jews who are "knit" between a contemporary life and one of traditional observance. The title refers to the common style of knitted yarmulkes many observant young men wear. 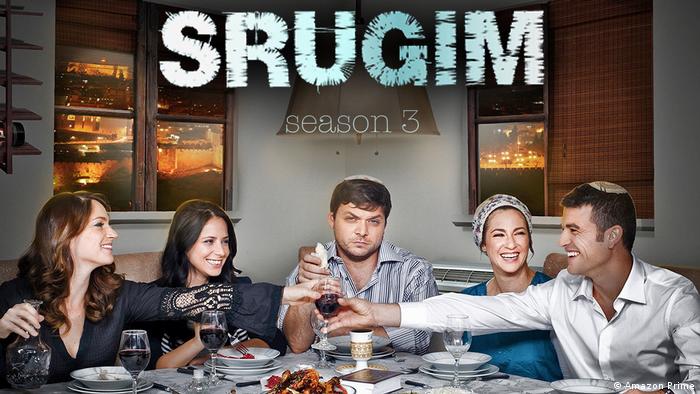 'Srugim': the religious version of 'Friends'

"For the unorthodox people, it opens a curtain for them to peek and look into the lives of people who are our neighbors, but who we don't really know," says Karni Ziv, head of drama and comedy, at leading Israeli commercial TV network Keshet Broadcasting. "Because Orthodox people are a part of Israeli society. For many years we didn't have any series about that community because we didn't have writers that came from that group. But in the last few years we do. And now their stories are coming out... Suddenly it is like it's opened a door and we are talking about them. You can see the big effect TV can have on our society."

As a TV writer, and as liberal Israeli, Leora Kamenetzky is a born skeptic. She says she's "doubtful" whether even the best TV can really heal the deep divisions within Israeli society. But, she says, she hasn't completely given up hope.

"Let me tell you a story. Hisham Suliman, the actor who plays a Palestinian terrorist in Fauda, was taking part in a different shoot near one of the hardcore Israeli settlements. And one of the settlers, one of those guys with the yarmulke and the machine gun, saw him and called out: 'Abu Ahmad, Abu Ahmad' — his name in the show. 'Why did you let them kill your character,' he said. 'I loved your character!' Now did Fauda change his opinion about the settlement issue? Probably not. But maybe it was a drop in the sea that could help him see that the person on the other side is a human too."

Israel seeks to outlaw filming of soldiers in action

The bill is a response to a video showing a detained Palestinian man being shot by an Israeli soldier. Critics says the aim is to curb army accountability, and vow to continue monitoring in the occupied territories. (17.06.2018)

The small country's TV output is impressive. Major streaming platforms have picked up some of the best Israeli productions. Here are five hit series you should check out. (25.03.2019)