Why the burkini causes so much controversy

While string bikinis are fully acceptable in the West, the burkini - a full-body swimsuit - is the topic of heated debate. DW speaks to fashion theorist Barbara Vinken about this polemic garment.

DW: For some, the "burkini" - a whole-body swimsuit sometimes worn by Muslim women - is a symbol of the oppression of women. For others, it is an article of clothing that enables Muslim women to participate in a part of cultural life.  What is your opinion?

Barbara Vinken: I think the problem is that this battle over the veiling of women is raging in Europe or the West in general about how much and which parts of the female body may be shown. So of course the burkini is received in this way.

I watched the Olympic beach volley match in which the Egyptian team was completely covered up in burkinis. The other team, the German women's team, was all dressed in tiny bikinis. You can really pose the question as to why people have to play volleyball in a bikini at all. I think it's a very humorous way of reconsidering why we do what when.

How does the burkini fit into the development of swimwear in Germany?

The burkini did not evolve directly from swimwear, but more from sportswear. It was developed in Australia so that women of Islamic faith could become lifeguards. It's a classic sportswear piece. I look at the burkini as more like a Neoprene whole-body suit.

There is also a strong trend in Australia, which we also see in the US, to keep the sun off your skin. As a result, there is a tendency to bathe in clothes or a t-shirt. I think the burkini points more towards this direction. The idea that the sun is beautiful, that we can sit out in it, has pretty much come to an end. Many people no longer go in the sun, almost as if they have a phobia.

Read: Why do women hide their hair?

What do you personally think of the burkini?

I don't have this sun phobia and I enjoy bathing in a bikini. I like that. But the burkini really doesn't bother me. It's all the same to me, honestly. I like what you see at the beach in France at the moment. There, no one has a burkini - they're really not that attractive. Instead, they sometimes have wide veil swimsuits - kind of like robes - and they go into the water in them. This is very poetic and it looks very nice.

How is the fashion tied to political debate? 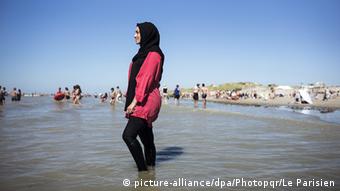 French beaches, like here in Fort Mahon, have been a particular site of controversy

Fashion is really always political. I recently saw a fantastic picture from the 50s. Police on a French beach were forcing ladies wearing bikinis to cover their navels. And then there was recently that picture of a lady in Nice who was forced to take her t-shirt off. I would say that the state with its laws and regulations has, interestingly, always focused more strongly on women's bodies than men's.

Even here in Germany, people were not always as revealing as they are today. Until the 1920s, women went swimming covered head to ankle. How did we get to this cultural development?

The development of bathing fashion followed this trend: We see more and more of the body and less fabric. Miniskirts, and more bare legs are things that were previously unthinkable. We are increasingly exposing women's bodies so that such ostentatious displays overtake the beauty of the body itself.

Many consider the freedom to expose the female body in Western culture as an achievement of modernity, and see the burkini as a kind of threat to these achievements of the women's liberation movement.

I think the women's movement only very rarely focused on making skirts shorter and cleavage deeper. Instead, it worked on ensuring that commodities and femininity were not considered equal, so that it doesn't come to a reification of the female body, or a commercialization in the direction of pornography. 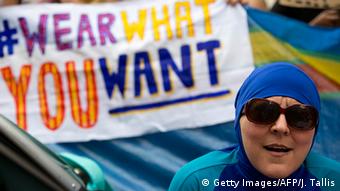 I would not say that this happens in the form of a bikini necessarily, but for sure it is a problem related to fashion. These days, fashion is seldom considered a feminist achievement - particularly if you ignore Coco Chanel. There are few fashion designers that the feminist movement would say deal with liberation.

But back in the day, the bikini was a symbol of freedom, self-confidence and femininity for many women.

It's not like we are talking about abolishing the bikini. If we were to consider whether we want to prescribe a skirt length, or again to cover our  hair, or now say that we can't walk around on the beach in a bikini…but that's not the case.

Many western designers like Dolce & Gabbana or sports brands like Nike (with "proHijab") are focusing on Muslim fashion. Are they managing to give a positive connotation to religion and allow participation?

I find it unfortunate that women are being forced into things, both in Europe and in Arabic countries like Saudi Arabia or Iran. By us, at school for example, they are forced to remove their veil. In Saudia Arabia they are forced to conceal themselves.

I think that fashion shouldn't be associated with laws and requirements - especially since there are a lot of young ladies, like young Turkish women in Berlin, for example, who obviously wear the veil as a fashion accessory.

You can't incapacitate others by dictating what they can do. You have to listen to them and understand what they want to do. I find that more meaningful.

Of course it's dangerous if this is forced on girls in their homes. But, interestingly, most of the studies I've read don't talk about this practice in Germany. Instead, they say that the hijab is more likely to be worn as a deliberate act of protest; an act of self-assertion; an action against what many people recognize as "femininity as a consumer good." I actually think using fabric to carry out this debate is quite funny.

A criminal trial in Corsica has concluded over a beach brawl that reportedly erupted over Muslim women clad in burkini swimwear. The ensuing melee prompted the local mayor to controversially ban the modest swimsuit. (16.09.2016)