Why St. Nicholas puts candy in boots and stole our hearts | Culture | Arts, music and lifestyle reporting from Germany | DW | 06.12.2020

Why St. Nicholas puts candy in boots and stole our hearts

Were your boots ready for St. Nicholas Day on December 6? DW's Sertan Sanderson explores why the saint means so much to both secular and religious people all over the world.

Each year, something peculiar happens on the eve of December 5: Children across Germany each leave a single boot outside their doorsteps, which is then magically filled overnight with chocolate and sweets. Sometimes, there's even a little bit of money.

Other cultures in Europe and beyond have also taken to celebrating similar traditions — either on the same date or stretched out throughout the holiday season. The tradition of hanging stockings up on Christmas Eve is one of the parallels that might come to mind.

December 6 is the day that celebrates St. Nicholas — Santa Claus's predecessor, if you like.

Long, flowing beards and red overcoats are but two commonalities they share. But unlike the American invention of Santa Claus, which can at least partly be traced back to clever marketing by Coca-Cola from the early 1930s, St. Nicholas carries the weight of almost two millennia on his shoulders — in addition to various gifts and pick-me-ups.

His sidekick, known as Knecht Ruprecht in certain parts of Germany, or more commonly referred to as Krampus, even got his own blockbuster movie — but that's another story altogether. 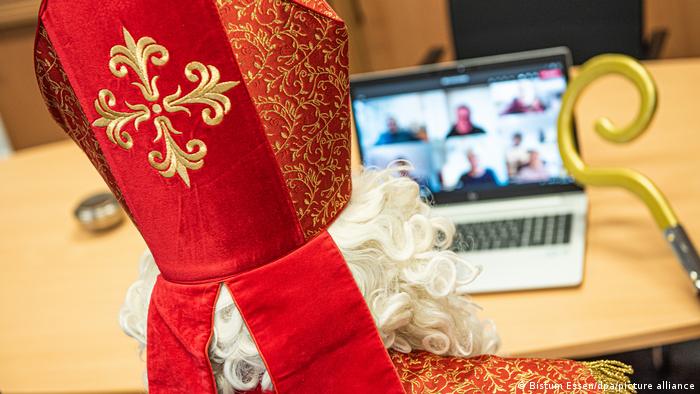 In 2020, St. Nicholas may have to put in some remote work due to COVID-19 restrictions

The 'person of faith' behind Santa

Carol Myers from the St. Nicholas Center, a US-based website that focuses on providing in-depth information on the popular saint's life and times, says that she has always been a St. Nicholas enthusiast. Her organization has been hosting a traveling exhibit based on the saint's biography for years, sharing the lore that follows him throughout the world.

"When my children were small I wanted them to know there was a person of faith behind Santa Claus. So, St. Nicholas Day was the perfect time to talk about St. Nicholas. Since we live in a Dutch-heritage town in Michigan, it was easy to add Dutch touches to our observance. The children would put out their wooden shoes out and receive small toys and Dutch chocolate gold coins, and we'd talk a bit about St. Nicholas," Myers tells DW.

The saint who transcends boundaries

Myers's passion for Nicholas isn't an isolated phenomenon. People from all over the world celebrate the man whose image has inspired the icon of a benevolent man bearing gifts during — at least for the Northern hemisphere — some of the coldest and darkest times of the year. 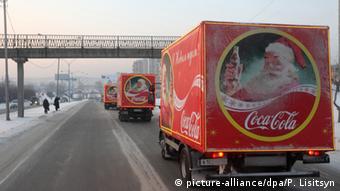 Coca-Cola invented Santa Claus in the 1930s, while St. Nicholas had been known across Europe for centuries

Carol Myers says that beyond bringing warmth to children's hearts, St. Nicholas bridges the divide between religious and secular, "as he's beloved by children everywhere, whether called St. Nicholas or Santa Claus."

"Many people, whether religious or not, are looking for more meaning in their holiday traditions and want to learn more about St. Nicholas, who helps focus more on giving than getting, more on compassion than consumption," she points out.

"His appeal also spans the Christian spectrum. He is one of the most significant saints in the Orthodox and Eastern Rite traditions, beloved by Roman Catholics and Anglicans, and many Protestants, as well."

Nicholas remains as one of the few saints whose universal popularity survived the advent of the Protestant age. Legend has it that Martin Luther himself tried to combat the saint's status by associating the practice of stocking-stuffing with Christmas rather than St. Nicholas Day, thus founding the tradition of gift-giving on December 24 or 25. 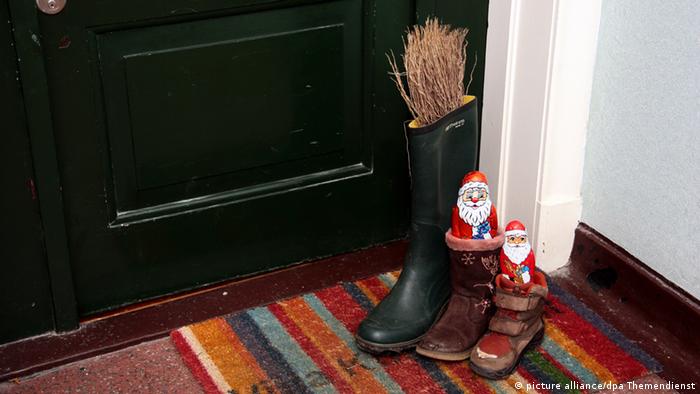 St. Nicholas cheer: this is what front-doors look like on the morning of December 6 across Germany

A saint for non-believers

But Luther's attempts fell short of achieving their full intentions, with more churches named after St. Nicholas than any other saint — bar Mary. This has contributed to further crafting the fable of a man who rises above religious infighting and division. Professor Adam English, chair of the Department of Religion and Philosophy at Campbell University in North Carolina, believes that St. Nicholas transcends religious appeal altogether.

"Unlike so many Christian saints who are revered and remembered by the pious few, Nicholas is celebrated by religious and non-religious alike. His reach goes beyond the walls of the church and beyond the pages of church history to the hearts of children and the imaginations of parents who name their daughters Collette and their sons Nick," English tells DW.

English wrote a book telling the historical story of St. Nicholas, entitled "The Saint Who Would Be Santa Claus," published by Baylor University Press. In it, he explores what he calls "the true and compelling tale of Saint Nicholas." 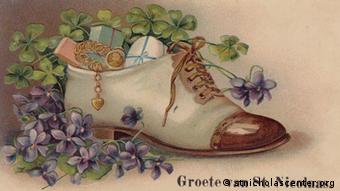 The man behind the legend

The historic figure behind the archetype embodied by St. Nicholas is Nicholas of Myra, whose life spanned from the late third to the mid fourth centuries. He lived in present-day southern Turkey, which was then part of the Roman Empire before the dawn of the Byzantine age, and brought people together at a time when social divisions and civil unrest were driving them further and further apart.

His reputation of being a man of good deeds preceded him throughout the Christian world; some of the acts attributed to St. Nicholas include him providing dowries for three young women to save them from falling into prostitution, saving innocent people from execution, and feeding the poor during famines.

"He strongly lived out Jesus' command to 'give all you have to the poor' and he did so, helping those who were most vulnerable: women and the poor. He lived the command to 'love your neighbor as yourself' by example," Carol Myers explains.

"Unusual for his time, Nicholas became a saint because of the quality of his life, not the nature of his death, as he was not martyred, as were most saints of that era," she adds. 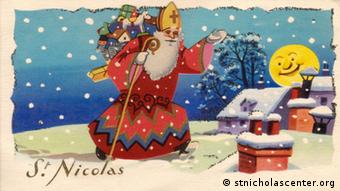 The early December tradition of St. Nicholas Day has been a strong influence on the idea of Santa Claus

Myers adds that during his lifetime, Nicholas became a devout bishop holding traditional beliefs. He was part of the collective of bishop attending the First Council of Nicaea, where an estimated 300 bishops established some vital foundations of early Christian doctrine, including the Nicene Creed — the profession of faith still recited at mass today.

Nicholas is coming to town

As much as Nicholas came to embody fairy-tale stories that still brighten up children's lives, there was a real person taking far-reaching actions in his lifetime during the early days of Christendom, which have all since become part of religious and non-religious holiday rituals today.

"There's a real history and a real person at the bottom of all of the holiday cheer," says English, who is a self-professed fan of all holiday traditions that are based by-and-large on both the facts and the myths embodied by St. Nicholas.

"Some might say that we have lost the saintly seriousness of the season, that we have made it too lighthearted and silly, and forgotten the real meaning of things," comments English.

"But it is good for us to laugh, and to laugh at ourselves, be a little silly and ridiculous, and even a little childish. We have a hard time figuring out something as simple as that. That's why we need a model: Saint Nicholas provides us with a guide, a model, and an example of someone who can laugh, is cheerful, and can have fun with the kids."

Cashing in on Christmas without Christianity

Even predominantly Hindu and Muslim countries deck the halls and department store windows during the traditional Christian holiday. For retailers, especially, this makes the season's profits all the more merry. (24.12.2013)

Saint Nicholas - one man, one mission

For centuries his mission has been holy - on December 6, St. Nicholas comes to Germany to bring sweet treats to all the good children. No path is too far, and he even manages to be everywhere at the same time. (04.12.2015)

With the holidays just around the corner, it's time to haul out the decorations and dust off the fairy lights. Europe's boulevards twinkle under a sea of lights. The joy of Christmas is upon us once again! (02.12.2015)