A ruling by a court in Amsterdam that "Zwarte Piet" or "Black Pete" is a racist caricature that can be banned from public celebrations has been overturned. The figure has been increasingly controversial in past years. 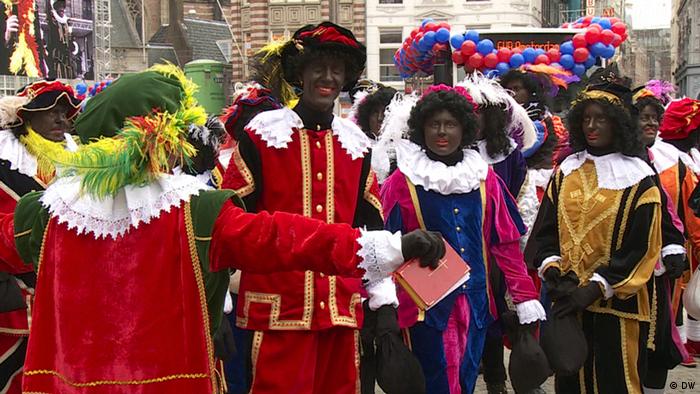 The Netherlands' highest administrative court, the Council of State, ruled in favor of the controversial Christmas figure "Black Pete" or "Zwarte Piet" as he is known in Dutch on Wednesday. The helper of Sinterklaas (the name of Santa Claus in the Netherlands) was brought before thae court after a lower judiciary in Amsterdam agreed that the figure should be banned from the traditional festivities marking the arrival of St. Nicholas on December fifth.

The lower court had found that Black Pete "forms a negative stereotyping of black people," and breached international agreements forbidding racism and discrimination, thus allowing the mayor of Amsterdam to forbid the figure from appearing in public Christmastime celebrations. The character, originally from a book by Jan Schenkman called "Saint Nicholas and his Servant," is a black man from northern Africa who waits on and helps Saint Nicholas.

During Sinterklaasavond (or St. Nicholas' Eve), Black Pete is usually portrayed by a white man in black face, an afro wig, Renaissance-style clothing and dark red lips. His role in the celebrations has been increasingly contested in recent years, with black and white citizens of the Netherlands alike expressing their discomfort with the character and how his role harkens back to slavery.

Yet many Dutch people cherish the tradition and want to keep it the way it is. A poll conducted last Christmas season found that 90 percent of Dutch citizens would not change his appearance, and a Facebook petition in support of Black Pete received 2 million "likes".

The Council of State in the Hague did not rule on whether or not Black Pete is racist, claiming that question is out of their purview. Rather they judged that the mayor of Amsterdam was not allowed to reject permit applications for public celebrations if the plans included the caricature.