Why Moscow's most iconic church used to be a swimming pool

The Soviets blew up Moscow's once majestic Cathedral of Christ the Savior. Now, its golden cupolas shine again in Moscow. Along the way, it was a site for prestigious communist projects - like a massive swimming pool.

It was the largest church in the orthodox Russian Empire. Following its construction in 1883, the Cathedral of Christ the Savior was a symbol for the close connection between church and state in the empire.

But just 34 years after its sanctification, the Soviets took power during the October Revolution of 1917. "Religion is the opium of the masses" then became the guiding principle in Lenin's politics of culture. The Soviets acted quickly: Nearly all churches were closed down, church property was confiscated and thousands of clergy members were shot. All of it was a matter of course for the new communist state.

The new model for society - which left no place for religion - was also to be reflected in architecture. More and more churches gained a secular function: They were transformed into storage spaces, movie theaters, libraries and residential homes. 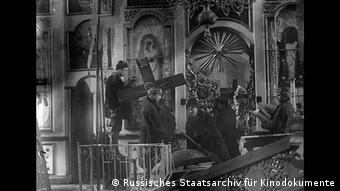 The Soviets confiscated relics and Icons in churches

The old Cathedral of Christ the Savior was 103 meters (338 feet) tall - its magnificent cupolas visible from the Kremlin. But this prominent location would also become a curse in 1931. Joseph Stalin was floating the idea of using the prime piece of property for a prestigious project: A Soviet palace was to replace the cathedral, complete with a statue of Lenin crowning the top of the 415-meter building.

The conspicuous monument was to represent this new communist society. Thus, the Soviets blew up the cathedral in 1931. In was no major loss in the eyes of those in power at the time.

When plans fall through 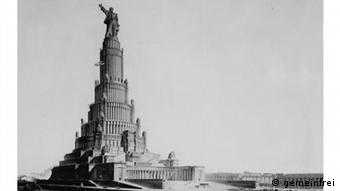 Higher than the Empire State Building: the planned Soviet palace

But the construction project was never completed. It came to an end when German armed forces attacked the Soviet Union in 1941. The largest building in the world to commemorate communism remained a mere idea - with nothing more than a drab gray foundation bearing witness to the project.

Years later, another construction project managed to set a record: The largest swimming pool in the USSR was built, measuring twice the size of a soccer field.

The water was heated throughout the year, making it possible to swim here on the coldest days of winter. The warm water plunged the plot of land, on which the cathedral once stood, into a densely foggy landscape. During the summer, the swimming pool was a popular meeting point for thousands of people in Moscow's inner city. 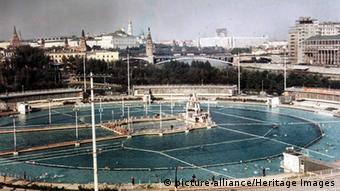 Acres of swimming options in the middle of the city

Nowadays, many Moscow residents have mixed feelings when recalling the huge swimming pool located at the cathedral site. On the one hand, they have fond memories of learning to swim there, or training for swimming competitions, or simply meeting friends. On the other hand, some of them are nearly ashamed for having once relaxed in the waters of the "Moskva" pool - at a formerly sanctified spot.

The Soviet plan could not compete. Religion could not be kept at bay for Russian society. As the strict religious politics loosened their grip toward the end of the Soviet Union in the 1980s, Christian communities seized their chance. They began restoring churches across the country and religious services were held again.

Since the end of the Soviet regime in 1990, orthodox Christianity is no longer viewed as an enemy of the state. On the contrary. The Russian Orthodox Church now plays a decisive role in Russia's national consciousness.

In the search for a new identity, the Russian state under Vladimir Putin is recalling its pre-revolutionary past. Symbols from tsarist Russia are experiencing a revival. Christian values are highly praised and a majority of Russians consider themselves religious. The Kremlin is able to wield religion as an instrument for tradition-conscious patriotism.

The Russian Orthodox Church has benefitted the most from this development - with state money used to restore or rebuild churches.

Disneyland or a symbol? 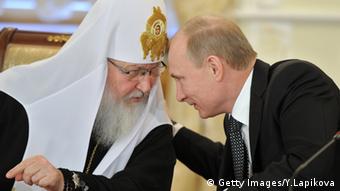 Vladimir Putin had words to share with Patriarch Kirill, head of the Russian Orthodox Church

However, the construction of the new Cathedral of Christ the Savior was financed through donations, with the project costing some $170 million. It took five years to rebuild, but then, it could shine again in all its majesty - at the spot where Stalin ordered the original one to be blown up. Patriarch Alexy II, then head of the Russian Orthodox Church, sanctified it in 2000. It was a perfect replica of the beautiful old cathedral.

Some critics see some elements of Disneyland in its architecture - a shiny surface with no substance. But for many Russians, today's Cathedral of Christ the Savior is a grand symbol for the fact that religion once again holds an important place in Russian society.