Why is Pakistan seeing a surge in Taliban support? 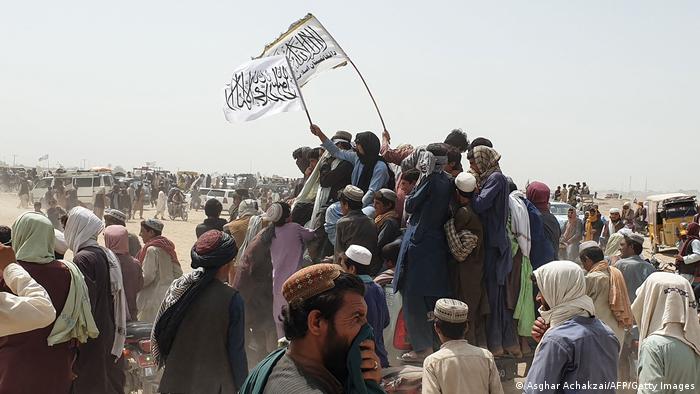 Videos of Pakistani citizens holding Taliban flags and chanting Islamist slogans at rallies to show support for the Afghan insurgents have been circulating on social media. This comes amid rapid Taliban advances in Afghanistan ahead of the complete withdrawal of US troops by September.

Islamic clerics in various parts of the country are also soliciting support for the Afghan Taliban and calling for donations.

Many locals and witnesses in the city of Quetta and district of Pishin of Balochistan province told DW that there had been an increased pro-Taliban activity in their areas.

"The Taliban enjoy local support in our area, but the rallies are not possible without support from state authorities," a resident told DW on condition of anonymity. "Initially, the clerics were asking for donations for the Afghan Taliban at mosques; now they are coming door-to-door to generate funds for the 'Afghan jihad,'" he said.

Mohsin Dawar, a progressive opposition lawmaker from Pakistan's northwestern tribal areas, said that "the Taliban continue to roam freely in different parts of Pakistan, including Quetta."

"It is not possible without the state's support," he said.

Government officials say the reports about pro-Taliban rallies and donations are unfounded. "The allegations are baseless. No such thing is happening," Zahid Hafeez Chuadhary, a spokesman for Pakistan's Foreign Ministry, told DW.

The Tehrik-i-Taliban Pakistan (TTP) is officially banned in the country, but experts say Islamabad's alleged support to the Afghan Taliban is giving impetus to the outfit.

Taliban gains in Afghanistan are also encouraging Pakistani Islamists to join their ranks in the war-ravaged country. According to local sources, dozens of Pakistanis have been killed in Afghanistan in the past few months while fighting alongside the Taliban against Afghan forces.

Analysts say Pakistani authorities have not taken any action to stop their movement. Social media posts have shown announcements and advertisements for their memorial services, as their dead bodies return to their hometowns.

Hundreds of people have attended the funerals of the Pakistani fighters in various parts of the northwestern Khyber Pakhtunkhawa and the southwestern Balochistan provinces.

Abdul Rasheed, a 22-year-old Taliban supporter, died in Nangarhar, Afghanistan, earlier this month. His funeral took place on July 11. Reports emerged that Islamist sympathizers chanted pro-Taliban slogans in his funeral, and hundreds of people visited his family to congratulate them on Rasheed's "martyrdom."

"Pakistan derives leverage over the Taliban not just because of the safe havens it has provided to the group's leaders, but also through the medical facilities it provides for Taliban fighters and support for the group's families," Michael Kugelman, deputy director and senior associate for South Asia at the Washington-based Wilson Center, told DW.

"Islamabad has previously suggested that its relationship with the Taliban puts it in a great position to facilitate talks between the insurgents and the Americans, and more recently the Afghan state. But, when it says it has limited leverage, it appears to be contradicting its own message. There is public support for the Taliban within Pakistan and over the years Pakistani nationals remain their volunteer fighters," he added.

Many Afghan and Western officials accuse Islamabad of providing safe havens and military support to the Taliban, which could further dent Pakistan's international reputation.

"The pro-Taliban rallies indicate two things: the state's inability and unwillingness to counter violent extremism as the next step after military operations. The government has not done much to mainstream Islamic madrasas and extremist groups because of political and strategic contradictions," Amber Rahim Shamsi, a senior journalist and political analyst, told DW.

"It is a contradiction that the authorities keep saying one thing to the international community, but the ground reality depicts a different picture," she said.

"While it is true that political engagement by the international community has given legitimacy to the Taliban, Pakistan ultimately has to bear the brunt of the spillover from Afghanistan."

"At the same time, it also shows support for the Taliban ideology in Pakistani society. The authorities have failed to counter their narrative," he said.

Analyst Kugelman shares a similar view about the support enjoyed by the Taliban in Pakistani society: "Many Pakistanis see the group as a better alternative to President Ashraf Ghani's government, especially because of the perception that it better serves Pakistan's interests in Afghanistan. So, if there are indeed rallies in Pakistan advocating on behalf of the Afghan Taliban, it wouldn't be a surprise."

Political analyst Rahimullah Yusufzai told DW that Pakistanis were unlikely to join Afghan Taliban forces, at least not in large numbers as they did during the war against the Soviet Union in Afghanistan from 1979 to 1989.

"The situation is much different now because the government is watchful. It will not allow people to cross over into Afghanistan and fight for the Taliban," Yusufzai said.

"However, in remote areas close to the Afghan border, people might still go to fight and collect donations," he said, adding that some Afghan students studying in Pakistani seminaries might support the Taliban and head to Afghanistan.

"They can see the victory of the Taliban and the situation is in their favor," he said.

"There are pockets of support for the Afghan Taliban in North and South Waziristan, but most of the people in other parts of the Khyber Pakhtunkhwa province want schools, hospitals, roads and infrastructure, not any militancy, be it from the Afghan Taliban or any other group," she told DW.

Afridi said clerics sympathetic to the Afghan Taliban might begin recruitment or collect donations but that such actions would be "vehemently" resisted by anti-war grassroots organizations like the Pashtun Tahafuz Movement.

The two sides are striving to reach a political settlement for the war-ravaged country, as NATO forces pull out.