Bugs have long been consumed in Japan, but now the market is growing. Insect vendors say this is because of the numerous nutritional and environmental benefits of this form of protein. 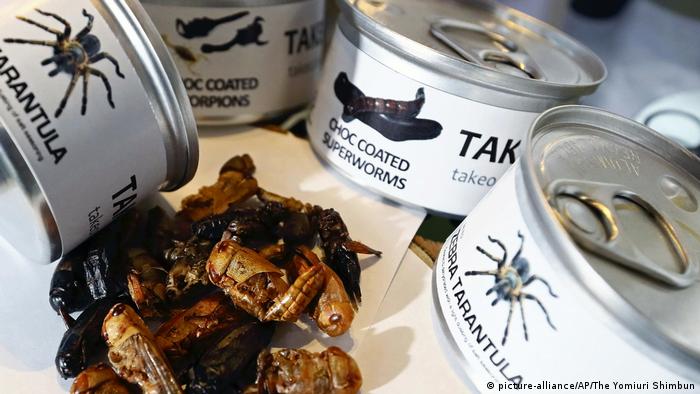 Japan has a long history of consuming insects. Packets of fried or sugared crickets are sold to children as snacks in many rural towns. But companies are now developing insect farms on a larger scale, marketing the insects on their high nutritional value and environmental benefits.

Across Japan, specialist shops sell foodstuffs incorporating everything from spiders to crickets, weevils and cicada. Meanwhile, restaurants stage promotional events with bugs on the menu.

Crickets as a balanced meal

Gryllus Co. is a food technology company set up in 2019 by Takahito Watanabe, a professor of developmental biology at Tokushima University, to raise crickets and develop them into a food source.

The company says its philosophy is to create a "new harmony" that helps solve the problem of protein going to waste, builds a global food cycle and provides healthy food.

"Crickets have long been eaten in Japan, and we see them as potentially an important and useful resource," Fumiya Aokubu, a spokesman for the company, told DW. "Raising crickets is environment-friendly. It requires very little land, water or feedstock, while the food conversion rate is far superior to livestock such as pigs, beef cattle or chickens."

Watanabe and his team are presently carrying out research to determine the exact nutritional values of crickets and the best ways in which they can be incorporated into food, Aokubu said, although much of that data is at present a closely guarded company secret.

The research has so far determined that crickets are high in calcium, magnesium, zinc, iron, vitamins and dietary fiber. Additionally, crickets can be processed into cosmetics and pharmaceutical products, as well as fertilizers.

"At the moment we are turning crickets into oils and powders that can be used in cooking, to make biscuits, curries and other meals, and we are planning to expand our research into other insects in the future," Aokubu said.

Take-Noko restaurant in Tokyo holds tasting events for insects. "We have seen a really big increase in interest in insects as food in the last couple of years, with people keen to try something different, something unusual," said Ryota Mitsuhashi, who oversees product development for the company. "Crickets and grasshoppers are the most familiar to many people, but we are also selling a lot of silkworms and spiders as food."

Mitsuhashi said his favorite insect was the larvae of wasps, traditionally prepared in the mountain towns of central Japan in the autumn months with miso, ginger and ground peanuts. Mitsuhashi admits that he's not a fan of the edible zebra tarantulas that Takeo stocks, however, as he is afraid of spiders.

The shop's customers are "more adventurous" than most, he said, and are of all ages and genders.

"The most important message that we have to communicate to customers is that the foods we sell actually taste very good," he said. "We can tell people that they are cheap to buy, that they are good for the environment and that they are healthy, but, if people are too worried about the taste, then they are not going to buy them."

Other companies in Japan are also exploring the possibilities of insect-based food products. Bakery Pasco initially began selling home-baking kits with flour made from ground crickets and now making a range of foods that incorporate silkworms under the Silkfood brand.

In the southern city of Kumamoto, a vending machine that sells precooked insects has attracted a good deal of attention from the public. It sells diving beetles, insect pupae and rhinoceros beetles alongside crickets as snacks. For those with a sweet tooth, some of the offerings in the machine are coated in chocolate.

Shoichi Uchiyama is an insect-eating advocate who has published a number of culinary books with recipes such as bug-based sushi. He has called on people to overcome their reservations about what is edible. He points out that insects have for generations provided nutritionally balanced and healthy meals. With the rise of bugs on the menu across Japan, his message may be becoming more palatable.