From US Marine to the face of Donald Trump's immigration policy, John Kelly now has become the White House's highest-ranking employee. But how did he get there? DW takes a look at the retired general's rise. 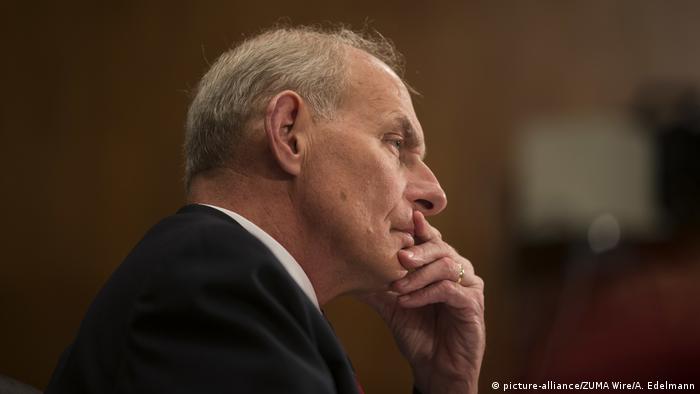 Kelly, a native Bostonian and retired military general, was sworn in on Monday as US President Donald Trump's chief of staff after serving six months as secretary of homeland security, a role that he used to enact a stringent policy of mass detentions of irregular migrants.

Shortly after the White House announced the resignation of press secretary Anthony Scaramucci, Sanders said that "all staff" are expected to report to Kelly.  The departure from office was widely seen by analysts as Kelly cleaning house within the administration.

Kelly's just-started stint in the White House is the next stage of his political career that follows extensive experience as a US serviceman.

From Marine to general

Kelly began his career in the US Marines by enlisting in 1970. After being discharged in 1972, he returned as a commissioned officer in 1976.

Despite serving as special assistant to NATO's Supreme Allied Commander for Europe beginning in 1999, Kelly made his military career mark while serving in Iraq. He served first in 2002 as assistant division commander for the 1st Marine Division before becoming the commander of Task Force Tripoli in 2003 after the fall of Baghdad.

He assumed command of coalition forces operating in western Iraq in 2008. After a year, he returned to the US, where he became the senior military assistant to former Defense Secretary Leon Panetta in 2011.

In 2012, Kelly was appointed commander of US Southern Command, which oversees military operations in South America, Central America and the Caribbean, including the military prison at Guantanamo Bay, Cuba.

While serving as the head of Southern Command, the general told the Senate Armed Services Committee in 2015 that human trafficking on the US-Mexico border posed an existential threat to the country.

"In my opinion, the relative ease with which human smugglers moved tens of thousands of people to our nation's doorstep also serves as another warning sign: these smuggling routes are a potential vulnerability to our homeland," he said. "Terrorist organizations could seek to leverage those same smuggling routes to move operatives with intent to cause grave harm to our citizens or even bring weapons of mass destruction into the United States."

Kelly retired from the military in January 2016, a move that effectively marked his shift to civilian life. Roughly one year later, Trump appointed him as secretary of homeland security.

In that position, Kelly was in charge of more than 240,000 employees, including border patrol agents, the Secret Service and the agency in charge of overseeing immigration and naturalization.

Kelly continues to be a major proponent of Trump's proposal to build a border wall. The president has described his now chief of staff as a "true star of my administration."

The planned expulsion of US diplomats in Russia is ostensibly a reaction to a sanctions bill passed last week by Congress. But the reality is more complicated as is trying to predict the Trump administration’s response. (31.07.2017)