Who are Cambodia's Adhoc 5 activists?

Cambodian authorities have intensified a crackdown on activists. Five prominent rights defenders, who have been languishing in jail since last year, are now nominated for the Martin Ennals Award. Who are they? 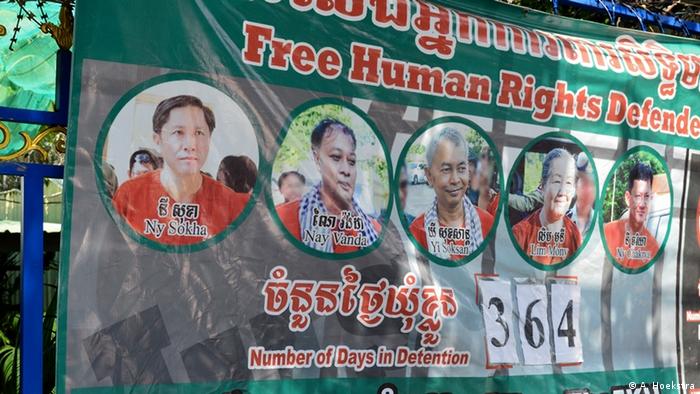 When Nay Vanda gave up his job as an English professor in 2008, he did so because he wanted to defend the rights of his fellow countrymen. He joined Adhoc, Cambodia's oldest human rights organization.

But it's been one year since Vanda was incarcerated along with three of his colleagues and Ny Chakrya, the deputy secretary general of Cambodia's National Election Committee. The Adhoc 5 - the name given to the five detainees - are accused of bribing a witness. Their detention, which was extended to another six months earlier this week, is widely seen as politically motivated.

The problems for the Adhoc 5 started in March last year, when recordings of an intimate conversation between Cambodia's opposition leader Kem Sokha and Khom Chandaraty, believed to be Sokha's hairdresser, were leaked. Chandaraty initially denied any involvement but later acknowledged she had an affair with the president of the Cambodian National Rescue Party, claiming Sokha had promised to pay her $3,000 (2,756 euros). The "prostitution" allegations gave a bizarre twist to the case.

Later, Chandaraty accused Adhoc officials of forcing her to lie about the affair. The authorities quickly arrested the Adhoc 5, accusing four of them of bribing the witness, and Chakrya as their accomplice.

Their arrest led to serious criticism as many Cambodians have great respect for the work Adhoc has been doing since the 1990s. 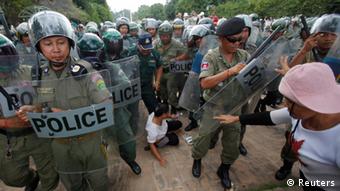 "The detained activists defend the marginalized people and have contributed immensely to improve human rights in Cambodia. They have risked their lives to defend others," a campaigner belonging to the FreeThe5KH group told DW on condition of anonymity.

FreeThe5KH calls for the release of Vanda and his colleagues. The group has asked Cambodians to show solidarity with the activists by displaying pictures of the detained activists on social media.

In December last year, the case took an unexpected turn when Sokha received a royal pardon at the request of Prime Minister Hun Sen. After being holed up in his office for months, the opposition leader was finally free. A pardon for the Adhoc 5 was also expected, but the judge denied their request for bail, saying the investigation had not been completed.

"He is kept in a small room that he shares with 25 prisoners. If he wants to rest, he has to lie on the floor. The cell has unhygienic conditions. The prisoners don't even have enough water to take a bath," she said. 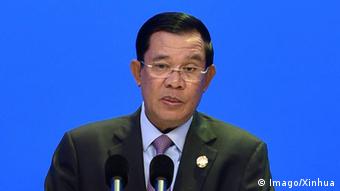 In an email to DW, Phil Robertson, the deputy Asia director of Human Rights Watch (HRW), said the Cambodian government was using the long pre-trial detention to punish the Adhoc 5 for their work and to intimidate others who wish to speak out.

"There is really no 'investigation' going on, but that is the court's lame justification for holding them," Robertson said.

According to the human rights group, Licadho, there are at least 27 political prisoners in Cambodia.

Robertson says Hun Sen's government has been cracking down on critics since the 2013 parliamentary elections, which saw the ruling party lose a large number of seats, albeit it still controls the judiciary.

"The government is using completely bogus charges to haul rights activists and send them to prison through trials that are neither free nor fair," Robertson underlined.

Earlier this week, the five activists were nominated for the Martin Ennals Award, an international accolade given to human rights activists whose lives are at risk.

The nomination is prestigious but Thiev Mey only wants her husband out of jail. "I only want him to be free from harm."

Forced overtime, discrimination and anti-union practices - a new report accuses Cambodia of failing to protect workers in the garment industry, and calls on apparel brands to disclose suppliers. DW examines the issue. (12.03.2015)