Cambodia′s garment workers facing new problems as wages rise | Asia | An in-depth look at news from across the continent | DW | 12.03.2015

Forced overtime, discrimination and anti-union practices - a new report accuses Cambodia of failing to protect workers in the garment industry, and calls on apparel brands to disclose suppliers. DW examines the issue. 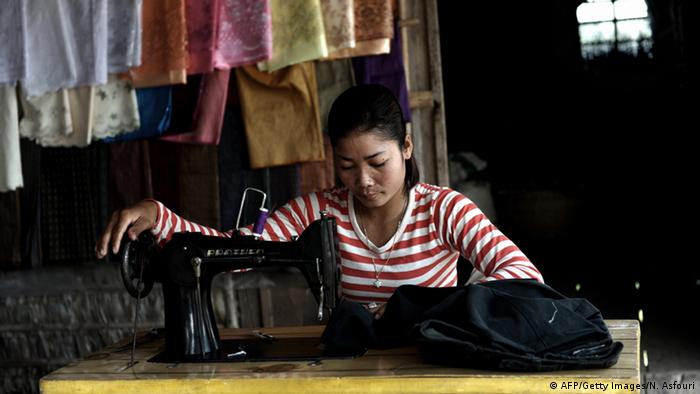 "The quota for us [sewing division] was 80 per hour. But when the minimum wage was increased, they increased our quota to 90. We have to do overtime work. We cannot say no. We are like slaves - not workers. Even if we go to the toilet, they whistle for us to come back. We can't even go to the toilet." These are the words of N.V., a factory worker in Cambodia's capital Phnom Penh, speaking to Human Rights Watch (HRW) in April 2014.

N.V. is one of the more than 340 people, including workers, union leaders, labor rights advocates, and representatives of both the government and the apparel industry, interviewed by the human rights group for its report "'Work Faster or Get Out': Labor Rights Abuses in Cambodia's Garment Industry."

Released on Thursday, March 12, the 140-page document examines what HRW describes as a "lax" enforcement of labor laws in the country's important clothing industry and actions by global apparent brands that “hinder monitoring and compliance."

The paper states that many of the 73 factories in Phnom Penh and nearby provinces examined by the group have repeatedly issued unlawful short-term contracts to avoid paying workers maternity and other benefits, and to "intimidate and control them."

"Small factories that subcontract to larger export-oriented factories are more likely to hire workers on a casual basis, making it harder for workers to assert their rights because they risk being easily fired," said HRW. 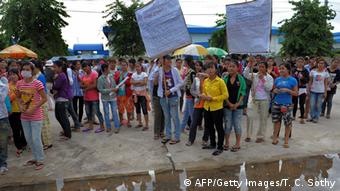 According to the rights group, female workers from 30 factories cited specific abuses, including refusing to hire, renew short-term contracts, or provide reasonable accommodation for pregnant workers, making it difficult for them to work in factories. There have also been reports of illegal child labor in 11 factories.

Cambodia's garment industry is by far the country's biggest export earner, with shipments amounting to more than $5 billion in a country where the GDP is $16 billion.

Dominated by foreign investments from Hong Kong, Taiwan, China, Singapore, Malaysia, and South Korea, the sector is critical not only to the national economy, but also to the livelihoods of the women who make up 90 percent of the more than 700,000 garment workers in 1,200 garment businesses in the country, according to the Ministry of Industry and Handicraft.

Independent Southeast Asia analyst Zachary Abuza argues that the number of those benefiting from the industry is actually much larger: "If one thinks about all the people that benefit from the sector, from truckers, port workers, construction workers, to family members, the garment sector probably supports several million of Cambodia's 16 million people."

Despite rapid economic growth, more Cambodians than at any time since 2004 feel their country is moving in the wrong direction, a new poll found. Corruption, deforestation, and economic issues top the list of concerns. (12.12.2014)

Almost 40 years after the deaths of nearly one in four people during Pol Pot's rule of Cambodia in the 1970's, the Southeast Asian country's long road to reconciliation remains seriously underfunded. (02.10.2014)

A UN-backed court has sentenced two former Khmer Rouge leaders to life for crimes against humanity. Trial monitor Heather Ryan tells DW the symbolic significance of the verdict is not easy to be overlooked. (08.08.2014)

But as Abuza points out, the poor working conditions in the garment factories had already led to strikes and labor unrest over the past two years - a situation which resulted in clashes with police and a subsequent crackdown on public protests. The analyst fears the situation could repeat itself if no action is taken soon.

There were major strikes in the country in mid-2013 and in the fall of 2014, as a result of which the government agreed to raise the minimum wage in the clothing industry by 28 percent from $80 to $128 a month. However, this fell short of the labor unions' $140 proposal.

Gregory Poling, Southeast Asia expert at the US-based Center for Strategic & International Studies (CSIS), points out that while the unions in the Southeast Asian nation have primarily been interested in the wage issue in recent years, factories now require greater scrutiny, especially amid reports that worsening working conditions might actually be resulting from the raise in the minimum wage as factories look for other ways to cut costs.

In its report, HRW quotes several workers as saying that factory managers pressured them to meet production targets in ways that undermined their ability to take rest breaks, use the washroom, drink water, or eat lunch. There were also incidents of forced overtime. "In some cases, the pressure increased after minimum wages increased in 2013 and 2014," said the authors.

At the same time, the paper's authors accuse apparel brands of failing to take adequate steps to end the "illegal" short-term contracts in their supplier factories - even where their supplier codes of conduct have clauses limiting their use.

"These global apparel brands are household names. They have a lot of leverage, and can and should do more to ensure their contracts with garment factories are not contributing to labor rights abuses." said Aruna Kashyap, HRW's senior women's rights researcher.

The analyst added that apparel brands "should encourage better monitoring and protection by publicly disclosing their suppliers," as many garment factories reportedly use various practices to reduce costs at the expense of workers' rights protected under Cambodian law.

"These international apparel brands need to help labor law compliance by publicly disclosing and regularly updating the names and addresses of their factories," Kashyap stressed. "Global garment companies can and should monitor and remedy poor working conditions in supplier and subcontractor factories." 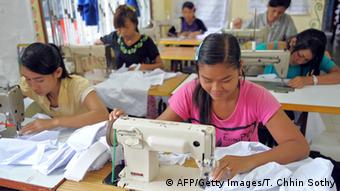 This view is shared by analyst Poling, who argues that global brands need to better scrutinize those factories with which they work and make proper working and safety conditions a requisite for doing business.

However, the expert fears that not all apparel brands will be proactive in this, as was the case with a number of large western companies that refused to join voluntary efforts to enforce better safety standards in Bangladeshi factories. "But bad PR can be a powerful tool to cajole them to join up," said Poling.

Of some 200 apparel brands that source from Cambodia, HRW said it was in contact with Adidas, Armani, Gap, H&M, Joe Fresh, and Marks and Spencer for the report. Among those, the rights group said that Adidas, Gap, and H&M seriously discussed efforts to address the problems found.

Adidas and H&M also publicly disclose the names of their suppliers and periodically update their lists. Marks and Spencer has committed to disclosing their supplier list in 2016. Only Adidas has created a process for workers to seek whistle-blower protection, said the rights group which also called on the government to revamp its labor inspections and systematically hold factories accountable for abuses.

In the meantime, analysts warn that in nations like Cambodia and Bangladesh, we are witnessing a perfect storm of conditions that lead to worker exploitation, much as was the case in Vietnam before its manufacturing began to move up the value chain. 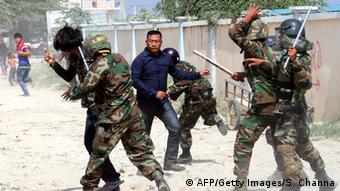 "Wages are remarkably low and garment manufacturers have every incentive to cut costs to the bone in order to compete globally. Add to this weak government oversight, and disinterest among leaders to strengthen it, and you have an environment rife for exploitation," underlined Poling.

This view is shared by analyst Abuza. He told DW that despite the already poor working conditions, factory managers in these countries can afford to be ruthless given that there are many people lining up to take jobs.

"And it is a ruthless and competitive industry. There is real concern by some in Cambodia that now that wages are higher than in Bangladesh and nearing Vietnam's, factory owners will threaten to pick up and move to the next place," said Abuza.

The draw for the group stage of the World Cup is a reminder that Qatar 2022 is just months away. But, despite years of international pressure, the human rights situation in the emirate remains cause for concern.