White House touts 'freedom gas' as next critical US export

The Department of Energy has said it wants to export "molecules of US freedom" from a new liquefied natural gas project to allies the world over. An official said it was part of the White House's "America First" agenda. 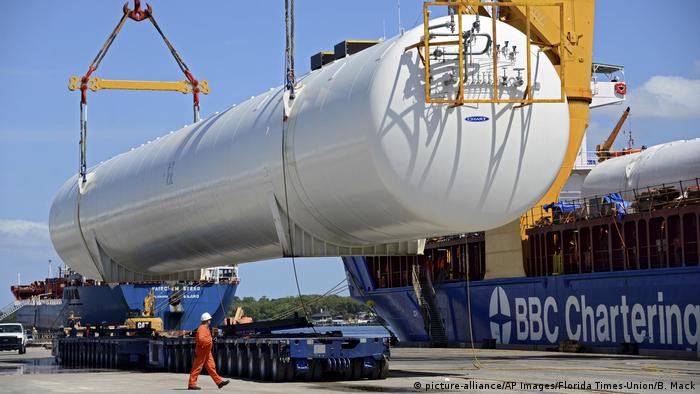 The Trump administration has deemed liquefied natural gas, or "freedom gas," a critical US export, saying it contains "molecules of US freedom."

Earlier this week, the US Department of Energy announced the approval of a liquefied natural gas (LNG) installation in Texas. Undersecretary of Energy Mark Menezes said in a press release that "increasing export capacity ... is critical to spreading freedom gas throughout the world by giving America's allies a diverse and affordable source of clean energy."

Steven Winberg, the assistant secretary for fossil energy who signed the export order, said the announcement was part of the White House's "America First" agenda.

"I am pleased that the Department of Energy is doing what it can to promote an efficient regulatory system that allows for molecules of US freedom to be exported to the world," Winberg said.

The two Department of Energy employees appear to be building on a metaphor coined by their boss, Energy Secretary Rick Perry, earlier this month.

During his visit to Brussels a few weeks ago, Perry equated LNG to US efforts to aid European liberation during World War II.

According to a report by the Euractiv media network, Perry said: "The United States is again delivering a form of freedom to the European continent. And rather than in the form of young American soldiers, it's in the form of natural gas."

Perry agreed with a reporter who asked him if "freedom gas" was an appropriate term.

The phrasing brings to mind other patriotic products like "freedom fries" and "freedom toast," renamed in some American eateries in reaction to French opposition to the US invasion of Iraq in 2003.

US to EU: Our liquefied natural gas is more reliable than Russia's

The United States has encouraged the EU to buy liquefied natural gas from the US instead of Russia. US exports of LNG surged following a meeting between Donald Trump and Jean-Claude Juncker in July 2018. (02.05.2019)

The US has a vested interest in selling liquefied natural gas to Europe's biggest economy as it produces a lot more than it needs at home. But is LNG really vital for Germany's long-term energy strategy? (12.02.2019)