US to EU: Our liquefied natural gas is more reliable than Russia's

The United States has encouraged the EU to buy liquefied natural gas from the US instead of Russia. US exports of LNG surged following a meeting between Donald Trump and Jean-Claude Juncker in July 2018. 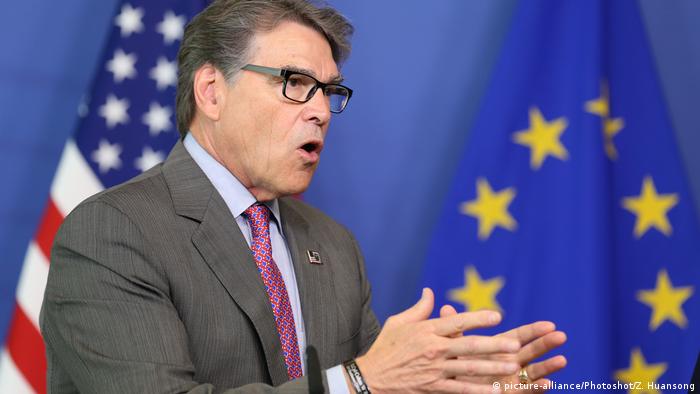 US Energy Secretary Rick Perry on Thursday pitched US liquefied natural gas (LNG) as a way for Europe to diversify and secure its energy supplies, as the US attempts to steer Europe away from Russian gas imports.

"If just the cheapness of the supply is all you care about then you would not buy a BMW or a Mercedes-Benz or one of the fine automobiles that come out of the European Union," Perry said in Brussels. "You might buy cheaper from someplace else but it might not be reliable and the point is the same with Russian gas."

Speaking alongside Perry, the EU's energy commissioner, Miguel Arias Canete, said the increase in US gas exports to the EU was understandable.

"Diversification is important not only for security of supply but also for competition," Canete said.

LNG has generally been considered overly expensive due to the effort required to liquefy and transport it when compared to gas transported in pipelines and other energy sources.

US tries to overtake Russia

But US President Donald Trump has criticized Europe for being overly dependent on Russian gas, particularly through the construction of Russia's Nord Stream 2 pipeline.

His administration has lobbied to stop the Nord Stream 2 gas pipeline to Europe, which has put it in opposition to Germany, the pipeline's main backer, and siding with eastern EU countries, including Poland.

"This project would drive Russian gas deep into the heart of western Europe, empowering Russia to gain further leverage over European foreign policy and bend those nations to its will," Perry. "We oppose using energy to coerce any nation and we remain a rock-solid reliable supplier of natural gas."

US and Europe make amends

Trade tensions between the US and Europe have escalated since Trump raised metals import tariffs in 2018 and threatened to follow suit on European car exports.

Since then, cumulative EU imports of LNG have increased by 272%, over the previous period, to a total of 10.4 billion cubic meters, Canete said Thursday.

The recent Ukraine-Russia flare-up adds potency to US claims its gas is a safer, cheaper bet than Gazprom's. But as the Kremlin adjusts to meet new gas demands, the US gas revolution could be far from plain sailing. (28.11.2018)