Barack Obama has welcomed Shinzo Abe to the White House for a rare official visit. The US president and Japanese prime minister were greeted with cheers by school children waving flags of their two countries. 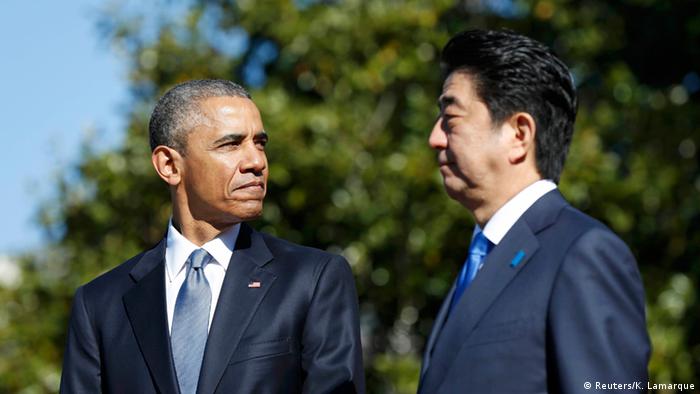 Obama is hosting Abe during a visit to showcase deeper defense ties and advance a Pacific trade pact as the two allies seek to counter China's growing power in Asia. On Tuesday, the president and first lady Michelle Obama received the Japanese prime minister and his wife, Akie Abe, in a formal ceremony on the South Lawn of the White House, complete with a gun salute and review of troops.

"Today is also a chance for Americans, especially our young people, to say thank you for all the things we love from Japan: like karate and karaoke, manga and anime, and, of course, emojis," Obama said to laughter from the crowd of schoolchildren.

Abe said he had made revitalizing the US-Japan relationship "the top priority of my foreign policy" and that it had grown "more robust than ever." The prime minister added that the TPP and the realignment of US forces in Japan remained on the agenda. The leaders planned to hold bilateral talks in the Oval Office ahead of a joint press conference and a state dinner in the evening.

When Abe becomes the first Japanese premier to address a joint session of the US Congress on Wednesday, many expect him to urge lawmakers to advance trade-promotion authority and eventually approve the TPP. In the latest effort by the United States to shift the balance of economic power in Asia from China, US officials have enthusiastically engaged 11 nations in the region on the pact.

"We welcome the significant progress that has been made in the bilateral negotiations and reaffirm our commitment to work together to achieve a swift and successful conclusion to the broader agreement," the two governments announced in a joint "vision statement."

Obama has had trouble winning over some fellow Democrats who oppose the TPP, which would cover a third of world trade, on environmental, labor and human rights grounds. Differences remain between US and Japanese officials over autos and agriculture.

Abe and Obama have had success with new defense cooperation guidelines, the first update in 18 years as Japan expands its foreign military presence. In New York on Monday, US Secretary of State John Kerry and Defense Secretary Ashton Carter met their Japanese counterparts, Fumio Kishida and Gen Nakatani, respectively, to finalize language on ways to boost their alliance through greater military cooperation.

Japan has had a host of economic and foreign relations problems lately. On Monday, Fitch cut the country's credit rating. And leaders in Asia have espressed discomfort with a shrine to Japan's World War Two dead.