Where does US media draw the moral line?

The decision by Fox News to post the video of a Jordanian pilot's brutal execution has sparked controversy. As with depictions of the Prophet Muhammad, journalists face tough questions about where to draw ethical lines. 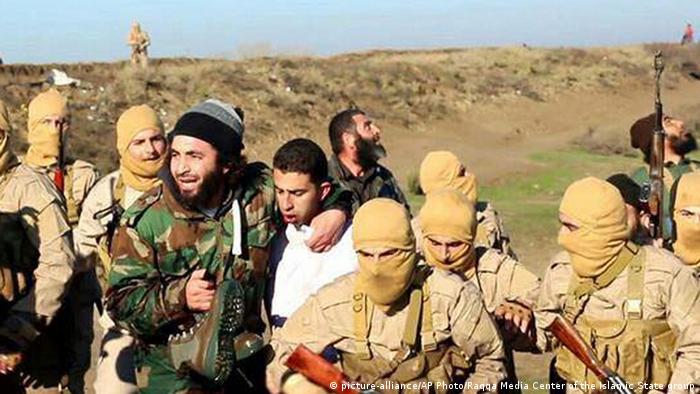 Most American broadcasters chose not to publish a propaganda video released by the "Islamic State" (IS) last week showing Jordanian pilot Muath Al-Kaseasbeh being burned alive in a cage. The lieutenant was captured by the militants in December when his fighter jet crashed over Syria.

CNN anchor Ashleigh Banfield explained on live television her network's decision not to publish images from the video.

"They are terribly graphic and cruel, but also they are of high propaganda value to IS(IS) members and that is not something that the United States, nor broadcasters, has any interest in helping to propagate," Banfield told viewers.

But Fox News decided to broadcast on live television still photos of Al-Kaseasbeh being burned to death. America's most watched broadcaster was the only network that chose to embed the complete unedited video on its website.

"After careful consideration, we decided that giving readers of FoxNews.com the option to see for themselves the barbarity of ISIS outweighed legitimate concerns about the graphic nature of the video," said John Moody, Fox News executive vice president, in a press release. "Online users can choose to view or not view this disturbing content." 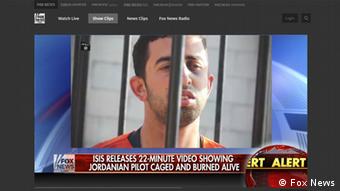 All the news that's fit to show?

The decision to post the video sparked public controversy, with some of Fox's personalities disagreeing with their own network. Howard Kurtz, host of Media Buzz, said he feared "that many of us in the media are helping ISIS spread its propaganda, using its fear tactics."

Last year, Fox refrained from showing videos of an IS militant beheading hostages, including US journalists James Foley and Steven Sotloff.

At the time, Fox's executive vice president of news and editorial, Michael Clemente, said that "what we try to do is use judgment so that people are informed about what actually happened while showing as little of what took place as possible."

According to Roy Peter Clark, an expert on media ethics with the Poynter Institute, even if Fox posted the video with the honest intent to raise public awareness about a security threat, the decision still poses serious ethical issues. After all, journalists can describe the video's content instead of posting it.

"The other people who have a stake in this are the family, friends and loved ones of this pilot," Clark told DW.

"As I think about the world I want to live in, it doesn't include a notion that people who are already victimized in a horrible way have to be re-victimized over and over again, even by the notion that the images of their son's death will be made widely available," he said. 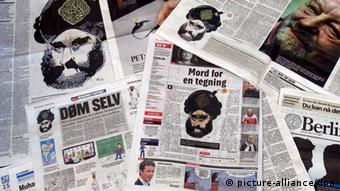 Many US media outlets refrained from publishing the Muhammad cartoons

While Fox decided to take a stand on publishing the video of Al-Kaseasbeh's execution, the broadcaster largely Mainstream outlets need to judge benefits of publicationrefrained in the aftermath of last month's attack on Charlie Hebdo in Paris from publishing the satirical magazine's caricatures of the Prophet Muhammad. The massacre, carried out by two heavily armed French Islamists who considered the cartoons blasphemous, left 12 people dead.

In the immediate aftermath of the massacre, the morning show Fox & Friends did broadcast a Hebdo cover that depicts Muhammad saying, "100 lashes if you don't die of laughter." But a network spokesperson subsequently told the website Mediaite that Fox had "no plans" to air the cartoons in the future. Fox did post to its website the first Hebdo cover after the massacre, which depicted Muhammad holding a sign saying "Je suis Charlie" under the caption "all is forgiven."

When asked to explain the broadcaster's rationale for generally refraining from publishing the Muhammad caricatures, a spokesperson told DW that Fox had not issued an official statement on the matter and declined to comment further.

Media expert Clark sees an important distinction between the two cases. Reprinting depictions of Muhammad runs the risks of inciting deadly violence against the media organization which makes that decision. Posting the video of the Jordanian pilot's execution does not, he said.