When planting trees does more harm than good

Creating new forests has been heralded as an effective way of tackling the climate crisis. Yet when it comes to drylands, lessons from the colonial era show it can have devastating impacts on indigenous wildlife. 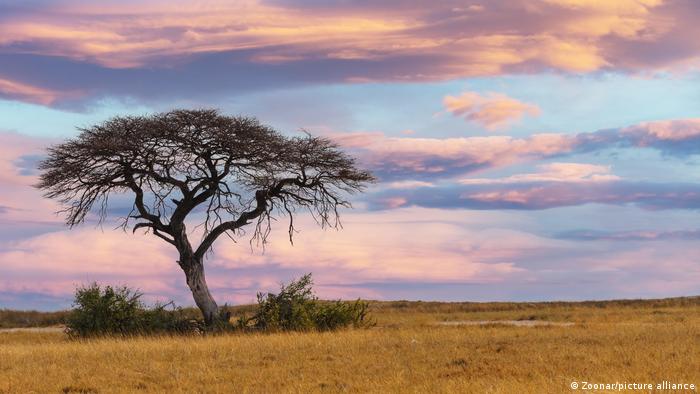 When Prosopis juliflora was introduced to Kenya's Baringo County in the 1980s it was heralded for the benefits it would bring to the area's pastoral communities.

A native of arid lands in Central and South America, the woody shrub, known locally as mathenge, was promoted by the Kenyan government and the UN Food and Agriculture Organization to help restore degraded drylands.

But after the El Nino rains of 1997, things changed.

Mathenge seeds dispersed widely, and without any local fauna adapted to eat the foreign tree it spread aggressively.

Impenetrable thickets overran grazing pastures, displaced indigenous biodiversity and depleted water sources. The trees' thorns pierced the hooves of livestock, while its sugary pods caused tooth decay and loss, sometimes leading to starvation among the animals it was meant to nourish.

Large-scale tree planting programs have been heralded as an effective way of drawing CO2 from the atmosphere. Yet in the verdant vegetation that has transformed Baringo's grasslands lies a stark warning: Sometimes, planting trees can do more harm than good. 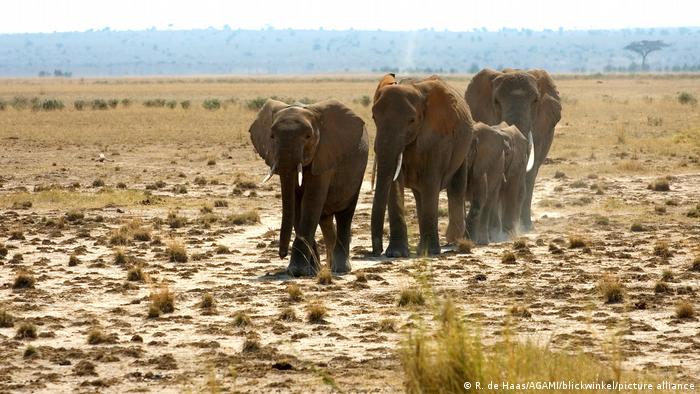 Since colonial times, misconceptions about drylands and disregard for Indigenous knowledge have led to trees sometimes being planted where they do not naturally occur, devastating endemic ecosystems and livelihoods.

And with fresh emphasis on tree planting as a low-tech way of tackling the climate crisis, some experts are concerned these same mistakes will be repeated.

Drylands cover 40% of the Earth's land surface, mostly in Africa and Asia and include savanna, grassland, shrubland and desert biomes.

These are areas characterized by water scarcity, seasonal climatic extremes and unpredictable rainfall. But they are rich in plants and animals uniquely adapted to these extremes.

Today, they are home to 2.3 billion people and half the world's livestock. Nearly half of all cultivated lands are in drylands, and 30% of cultivated plant species are native to them.

Over millennia, people have adapted to the extremes of drylands, too.

They have done this by learning how to manage risk and harness variability and uncertainty in their favor, said Ced Hesse, an expert on the livelihoods of dryland areas at the London-based International Institute for Environment and Development. 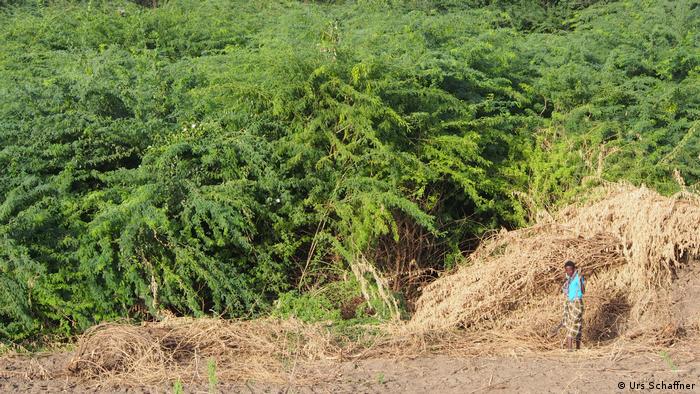 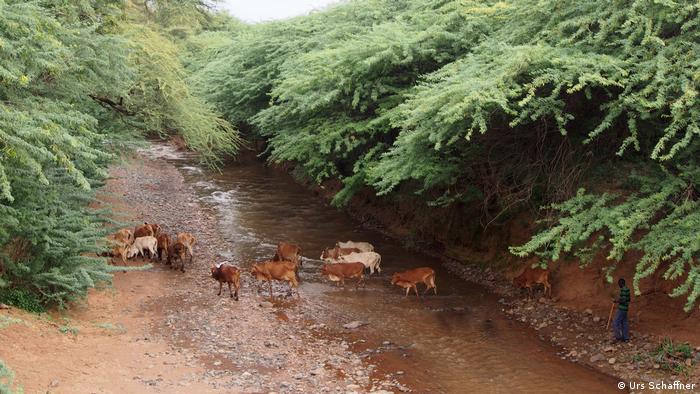 From exploiting seasonal variations to maximize food productivity to selectively breeding animals that can endure challenging conditions, dryland inhabitants "developed incredible Indigenous knowledge of how to work with nature to their benefit," said Hesse.

Indigenous knowledge and the colonial era

In her book "The Arid Lands: History, Power and Knowledge," Diana K. Davis, an associate professor of history at the University of California, Davis, argues this knowledge has historically been devalued and disregarded because of the colonial-era assumption that drylands were wastelands and mostly treeless due to overgrazing and deforestation by locals.

Davis said such assumptions were common across French and British colonies — from the Maghreb to Southern Africa and the Middle East to India — and used to justify programs and policies that marginalized significant numbers of Indigenous people.

At the same time, these assumptions paved the way for drylands to be appropriated for other land uses, like croplands and conservation, said Susanne Vetter, an associate professor in plant ecology at Rhodes University in South Africa. 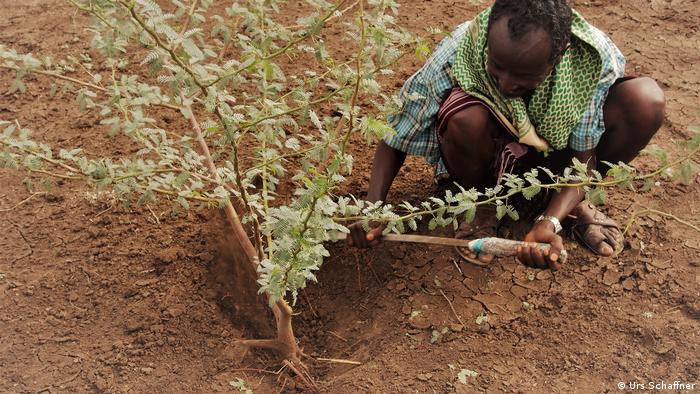 A man removes a mathenge tree that is only a few months old in Baringo Country. The shrub grows very fast

It was from this context that tree planting — often with invasive foreign species — emerged as a solution to drylands' perceived problems.

Like the social legacy, the environmental costs of land conversion were high: degradation, salinization, loss of productivity and biodiversity, spread of invasive species and depleted water sources.

Despite decades of advances in arid lands ecology, misconceptions about drylands have proven difficult to change and continue to be reinforced by policymakers, media and education curricula, said Hesse.

"Many of the problems in the drylands stem from trying to change them, through high-intensive capital investments and technology, into something they are not, like gardens of Eden," said Hesse.

Vetter fears this is precisely the risk with several mass-planting initiatives launched in the last decade. Among them, the Bonn Challenge and the African Forest Landscape Restoration Initiative (AFR100) target countries in Africa, Asia and South America largely covered by savannas and grasslands.

"There is a need to restore forests in Africa," said Urs Schaffner, head of ecosystems management at CABI Europe-Switzerland, who works with Choge to manage the mathenge invasion in Baringo through the Woody Weeds project. 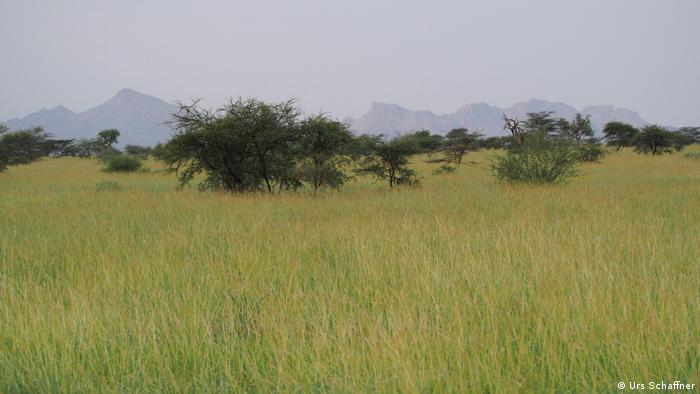 A healthy grassland in Afar, Ethiopia demonstrates what the grasslands of Baringo County should look like

Yet how that happens matters tremendously. Rather than fixating on numbers, it's crucial to plant in "the right place and with the right species," Schaffner explained.

Of particular concern to Vetter and Schaffner is afforestation — planting trees where they did not occur beforehand — which can ravage the land as mathenge has in Baringo.

Also problematic is the underestimated role of arid lands in climate change mitigation. "Healthy grasslands can store the same amount of carbon as forests," said Schaffner.

So far, Vetter says it's too soon to know what the impact of these new planting initiatives will be. But from experience, she is concerned they have "the potential to go wrong."

Instead, Buss said the project involves a mix of interventions including natural regeneration, agroforestry and silviculture, the practice of controlling tree growth.

For residents of Baringo, the damage has been lasting. In 2006, they took the Kenyan government to court, demanding compensation for their losses from the mathenge invasion.

Although successful in their legal effort, few meaningful changes have been implemented by the government.

Today, the communities that have suffered the most from mathenge are working to slow its spread and assist in its removal. In its place they are planting indigenous species to restore the area's grasslands, said Choge.

By working with, not against the land, they hope to recover grassland biodiversity, which in turn will support sustainable livelihoods and help communities better cope with the impacts of climate change.

Choge said they hope to eliminate most of the mathenge within 20 years, but admits the challenge ahead is great. "It's not easy to remove it, but we'll do our best."

Turning a weed into a valuable commodity

Greening Senegal's Dakar one tree at a time