What′s so special about the Franco-German relationship? | Europe| News and current affairs from around the continent | DW | 07.05.2012

What's so special about the Franco-German relationship?

Reliability on the one side of the Rhine, and lightness of being on the other - characteristics that complement each other. Are Germany and France really Europe's dream team? What's the basis of their relationship? 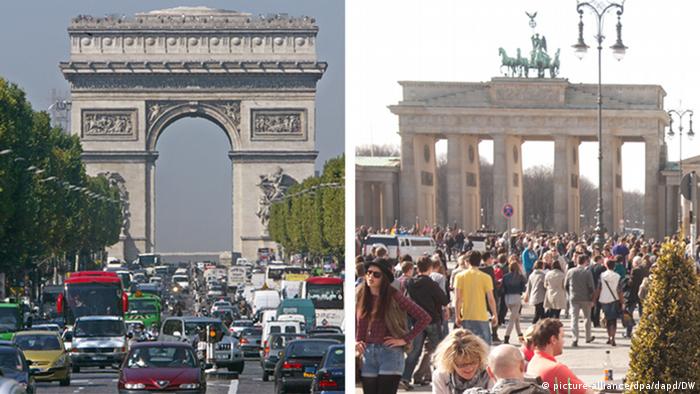 When the journalist Pascal Thibaut gets one of his rare moments of homesickness he tends to pay a visit to a French department store in Berlin, where he usually heads straight for the food department. He's been living in the German capital for 20 years, and he says this is the only place in Berlin that sells the sweets he remembers from his childhood. And, he adds, they also have a good lunch menu that consists of typically French snacks.

That's all a German needs to hear to have the number one German stereotype confirmed: good food, cheese and wine are very important in France - that's what Germans think of their neighboring country's culture. The German expression "living like God in France" says it all.

That idiom is the first thing Celine Caro thinks of when she thinks about what it is that could possibly make France so appealing for Germans: "France has this reputation that it's the country of good cuisine". Caro has been living in Germany for ten years and works for a political foundation. Her friends and family have come to understand her enthusiasm for Germany now, she says, but it took a while. She recalls how her French friends reacted when she decided to move to Germany to study - they all thought it was strange and that Germany was boring. "Now I'm in Berlin, and the French are completely thrilled. At the moment Berlin is Europe's best capital." 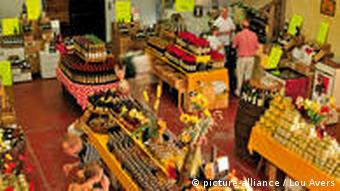 The Germans' favorite cliché: the French love their food

Germans, on the other hand, says Pascal Thibaut, tend to love Paris, for the city's "lightness of being." Thomas Bork says the Germans love France's positive image. Bork, who works for an international company, has been living in Paris with his family for eight years. After an initial period which you spend as a tourist trying to adapt to the city, he says, "savoir vivre" becomes part of your daily life, and you become part of the French work environment - which can be quite different from what you know from Germany: "Germans are more planning-oriented", he points out, adding that French companies occasionally have problems with implementation, while one of their strong points is innovation, anything to do with creative ideas, and strategic planning. That's something, Bork says, that Germans can learn from the French.

Caro, on the other hand, says what she appreciates about working in Germany is how open contact between colleagues is, and that there is structured communication, and a well-organized work environment. She believes she herself is still rather French in that respect - her work, she says, is characterized by short-term orientation and spontaneous decision-making.

Is that what makes the difference: "analytical people" on one side; "emotional people" on the other? Christiane Deussen, director of the Maison Heinrich Heine in Paris, believes this judgment is too general and vague. Germans do tend to be more reliable and more pedantic in their work, she says, and the French are more spontaneous. But that doesn't mean that Germans are more efficient overall. Christiane Deussen points out that it's the differences between Germans and French that gets many things going, especially in Europe: "Both cultures complement each other extraordinarily well." 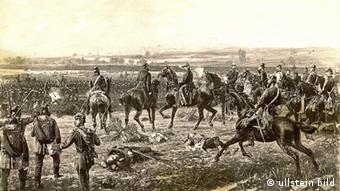 Germany and France were bitter enemies in the war of 1870.

But that wasn't always the case. The Franco-German relationship has many layers - and it's emerged from some historic turbulences. Think of the 1870/71 war, or the First and Second World Wars - periods when considerable resentment and deep mistrust persisted on both sides of the river Rhine. But nobody in Europe doubts that Franco-German reconciliation after the Second World War was exemplary: "Konrad Adenauer and Charles de Gaulle helped lay the foundation for the way we communicate today between our countries. And so our relationship has grown very deep over the years," Celine Caro believes.

Both countries, she says, at some point understood that they were "better off together than apart." The 1963 Elysee Treaty institutionalized the reconciliation. "What happened in terms of reconciliation in the post-war period is almost a miracle," Deussen adds, especially when you look at just how deep the differences were. Petra Sigmund is the press spokesperson of the German Embassy in Paris and says she is fascinated by the way the relationship developed: "What's so precious about Franco-German relationships is how we move towards each other even if we have very different instinctive reactions to many questions." 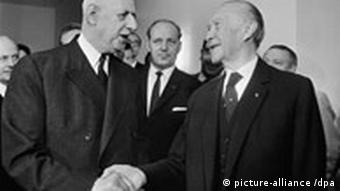 Searching for compromise, Sigmund says, is intense political work, but the result is almost always a Franco-German compromise. The way the two countries move towards each other is exemplary for other states in Europe, too, says Sigmund, but she warns against portraying Germany as a model state whose economic policy France should try to copy: "Every country has its own political culture and history," says Sigmund, and she must speak to the heart of many French people, who have had enough of their current President Nicolas Sarkozy's frequent demonstrations of admiration for German success stories.

The Franco-German relationship is stable and crisis-proof today, and yet both sides have their own interests - and they uphold them. In a survey, the German embassy in Paris tried to find out what the French think about Germany. More than eighty percent of interviewees had a positive opinion. But their view was different from the romantic one that many Francophile Germans have. "In France there's admiration for the success stories of the German economy, but there's also a bit of jealousy because France's economy is often not as successful," says Signmund.

Bork agrees. She believes that the French have respect for Germany, but they don't love the country. Mutual respect, she says, is particularly important - even if there are also the feelings of competition and inferiority. These feelings, she says, have always characterized Franco-German relations and shouldn't be over-dramatized.

… but a considerable amount of curiosity 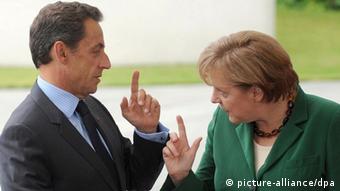 'Merkozy' steered the European ship through the economic crisis

Germany's politics, economy and culture are issues which interest many French people. According to Sigmund, they want to know "how exactly Germany works." And the same goes for Germans, who will not give up trying to understand France. The foundation for this is a system of lively exchanges across all walks of life. Countless city partnerships and the activities of the Franco-German Youth Office are only the beginning.

And when friendships emerge from this kind of exchange, the French can laugh about how meticulously fussy the Germans can be with their cars, or about the strange traditions of Karneval. And Germans are no longer puzzled at the extensive celebrations on France's National Day, long business lunches, and the different attitude of a French workman.

Pascal Thibaut, who says he's your "Jacques Average Frenchman," has finished his shopping tour at the French department store in Berlin and has had a quick lunch there. "Are you paying together or separately?" asks the waiter, with the bill in his hand. That is something a French waiter, pardon, garçon, would definitely never ever say.

Statistics show an increase in the number of German language learners in European states hit hardest by the economic crisis. The situation could prove beneficial to Germany suffering from a shortage of skilled labor. (24.04.2012)

German and international leaders have begun responding to the first round vote in France, with Chancellor Merkel's office seeking to stick by Nicolas Sarkozy while also reaching out to Francois Hollande. (23.04.2012)

'German-style reforms would be a disaster for France'

There is a sense of crisis in France. Unemployment is at a record high and growth is well behind Germany's. Economic expert Isabelle Bourgeois spoke with DW's Andreas Noll about the need for reforms. (20.04.2012)