Corruption charges against former Malaysian Prime Minister Najib Razak mark a major turning point in a graft scandal that has blighted the Southeast Asian nation. Malaysians are seeking a return to good governance. 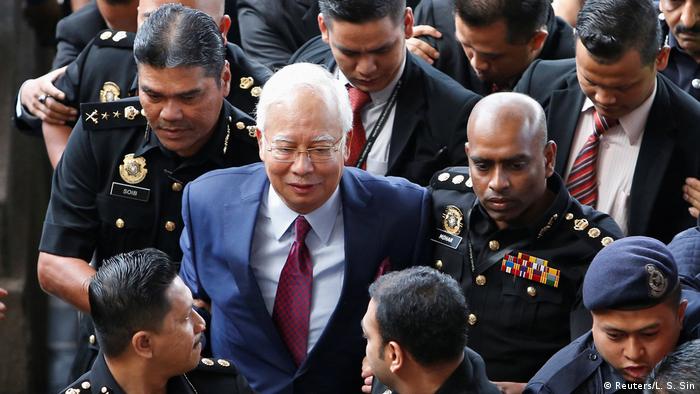 The spectacle of former Malaysian Prime Minister Najib Razak being hauled to court to face corruption charges gripped Malaysians and marked a historic moment in the nation's politics.

Najib, who until recently was at the apex of power in the Southeast Asian country, now must face the ignominy of defending himself against accusations of corruption.

The massive graft scam involving the state-run multibillion-dollar 1MDB fund, tarnished Najib's reputation and many believe it played a major role in his party's defeat in recently held elections, which upended the nation's political landscape.

On Wednesday, Najib pleaded not guilty to three charges of criminal breach of trust and a fourth for abuse of power. He has been released on bail and was ordered to surrender his two diplomatic passports. His trial will begin in February 2019.

The court also granted an interim gag order that Najib's lawyers requested. This would limit media coverage to only "the merits of the case," and hamper reporting on a high-profile story spanning six countries. Malaysian Attorney General Tommy Thomas, who leads a 12-member prosecution team, will file a formal response opposing the order. 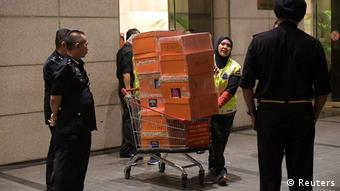 Police raided Najib's apartment in Kuala Lumpur in May 2018

The return of good governance?

Social media has been awash with posts and memes by Malaysians welcoming the news of the imminent trial of a leader who they see as having enriched himself with public funds while tainting the country's image.

Many attribute the swift investigation and Najib's subsequent arrest to the current ruling party Pakatan Harapan's pre-election promise to deal with the 1MDB scandal.

"Truth be told, I believe that his being brought to justice was partly driven by public pressure. After all, it is us who put the current government in charge of running this country," Kuala Lumpur-based legal consultant, Madeleine D’Angelus, told DW.

Bridget Welsh, associate professor of political science and Southeast Asia expert at the John Cabot University, who is currently in Kuala Lumpur observing the proceedings, said that this case will also reinforce the issue of good governance — something that the public found lacking during Najib's tenure as premier.

"It is a precarious situation because it's a highly politicized arrest that shows that what goes around comes around. It also shows that Malaysia is moving towards a cleaner process and there's a lot of hope. People are pleased. For many Malaysians, Najib betrayed the public's trust," she told DW.

Described as the "world’s biggest financial scandal," the 1MDB issue laid bare the rampant and deep-rooted corruption within the Malaysian government and some of the external bodies associated with it.

"The problem of corruption is endemic in Malaysia — it's not just within politics but also businesses. So this is the beginning of a very important step and sends a signal that leaders are accountable and cannot misuse public funds. It moves Malaysia in the right direction to clean out the dirt," said Welsh.

Others see Najib's prosecution as a warning to members of the current Pakatan Harapan government under Prime Minister Mahathir Mohamad, as well as future administrations, to conduct their affairs transparently and not to the detriment of the electorate who voted them into office.

"There is already a new policy in place stating that gifts to government figures are to be kept to a minimum. If this is further strengthened by legislative developments and the guarantee of the independence of the Malaysian Anti-Corruption Commission (MACC), then I am confident that this will see the end of most corruption," Azmi Sharom, associate professor of law at University Malaya, told DW.

"Money politics, that is to say buying patronage and support, will probably go on in parties such as UMNO which, by their selection of [former deputy prime minister] Zahid Hamidi as their new president, have shown that they want to continue business as usual," Azmi added.

Not going down alone

Both Najib and his supporters have contended that the charges against him are politically motivated. This places the onus on the current administration under Mahathir to not just establish a watertight case against Najib, but also to dispel rumors of political retribution.

Najib, who also held the finance portfolio during his tenure as prime minister, has previously claimed ignorance of any wrongdoing in the daily business of 1MDB.

"His name is on the documents and the money was in his bank account. The MACC wouldn't have arrested him without due cause. They have not rushed into it. It's been five weeks since they started conducting the investigations and counting the goodies," explained Welsh, adding that Najib is unlikely to go down alone.

"I would say that the directors involved in 1MDB will be affected as well. Other former ministers are coming forward too. There is a collective responsibility."

"The anti-money laundering law in Malaysia has a very broad range of offenses; anyone proven to have received money from 1MDB will be in serious danger of prosecution."

The neighbors are watching

Najib's arrest and imminent trial may also have international implications, which could prove discomfiting to some Southeast Asian nations.

"While Najib isn't the first leader to be arrested in Southeast Asia, his arrest makes history in Malaysia," said Welsh. "Among Southeast Asian neighbors, Singapore would be watching very closely as its [banking sector's] involvement with the 1MDB has not been fully divulged yet," said Welsh.

Azmi also believes that the prosecution could look to Malaysia's neighbors for cues on how to best navigate the unchartered territory of bringing high-ranking government officials to justice.

"In terms of battling corruption, Indonesia has made some impressive progress and could probably be a better example to look to," he told DW.

Despite their jubilance that justice is finally being meted out, Malaysians are remaining rather pragmatic.

Fahmi Reza, political critic, street artist and documentary filmmaker, who was jailed last year for publishing a clown caricature of Najib, was among those following the proceedings in Kuala Lumpur.

"The arrest and prosecution brings us one step closer towards getting some justice, but the fight against corruption and kleptocracy is far from being over. We still have a long way to go if we want to end the culture of impunity and corruption in this country," Fahmi told DW.

In a prerecorded message to his fellow Malaysians posted on Twitter on Tuesday, Najib apologized and sought forgiveness from fellow Malaysians, adding that despite doing his very best "there were many weaknesses."

Najib also fired a salvo at the current administration. "Everyone is equal before the law," he said. "Not just in the world, but also judgment in the afterlife."

Politicians, party or policies: how will Malaysians pick?

While focus has been trained on the candidates for the upcoming Malaysian elections, voters at home and abroad shared their views with DW about the key issues that could determine the outcome of the vote. (04.05.2018)