What's NATO's Article 4 and why are people talking about it?

NATO has met to discuss a response to Russia's invasion of Ukraine. Article 4 of the organization's treaty could play a key role. 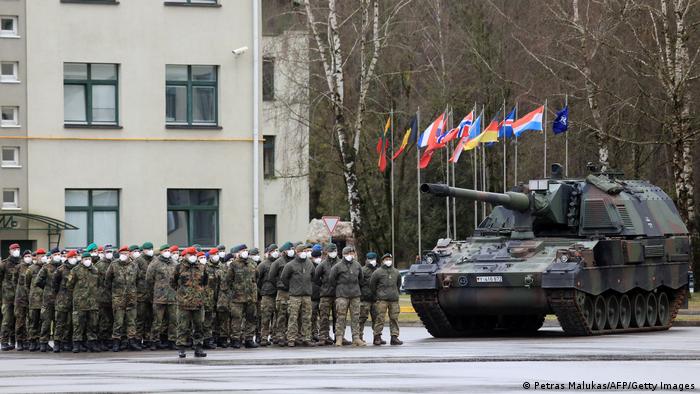 Article 4 of the NATO treaty covers the case when a member state feels threatened by another country or a terrorist organization. The 30 member states then start formal consultations at the request of the threatened member. The talks look at whether a threat exists and how to counter it, with decisions arrived at unanimously. Article 4 does not, however, mean that there will be direct pressure to act.

This consultation mechanism has been triggered several times in NATO's history. For instance, by Turkey one year ago, when Turkish soldiers were killed in an attack from Syria. At that time, NATO decided to consult, but did not take any action.

Following Russia's invasion of Ukraine, NATO members Estonia, Latvia, Lithuania and Poland triggered Article 4. Along with Slovakia, Hungary and Romania, those countries are part of the "eastern flank" of NATO, which is currently being reinforced with about 6,000 US, 1,000 UK, and 350 German soldiers, as well as troops from other NATO members.

Article 4 is different from Article 5 of the NATO Charter. That latter lays out the military assistance by the entire alliance should one of the member states get attacked. The only time that Article 5 was used was in 2001 after the al-Qaeda attacks on the US, which killed more than 3,000 people. When the US then attacked Afghanistan, NATO sent a mission alongside.

The NATO treaty only applies to member states. Given that Ukraine is not part of the alliance, it can trigger neither Article 4 nor 5.

How are EU and NATO reacting? DW's Alexandra von Nahmen reports from Brussels

NATO has been at the heart of defense policy for many Western European nations for decades. As time has gone on, it's moved eastwards. But how did the alliance become what it is? Who pays for it? Where is it going?

German, EU and NATO officials have been quick to harshly condemn Russia's attack on Ukraine. They are holding a flurry of meetings throughout the day.