What is the future of Indian investment in Afghanistan?

India invested heavily in Afghanistan's development projects after the 2001 US invasion of the country. It is unclear what impact the Taliban's return to power will have on these projects. 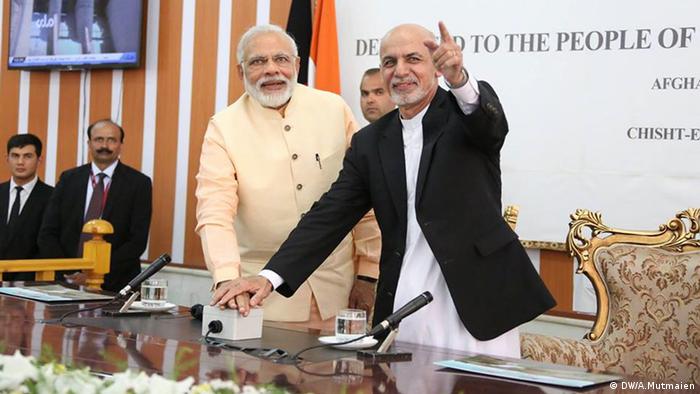 New Delhi spent billions of dollars on infrastructure and humanitarian assistance in Afghanistan after the United States toppled the Taliban regime in 2001.

From building highways to transporting food and building schools, India "invested time, money and effort" into rebuilding Afghanistan, according to an Indian business expert.

The expert, who asked not to be named, said Indian projects in Afghanistan would require regular maintenance and can only survive in a "conducive environment."

Aparna Pande, the director of the Hudson Institute's Initiative on the Future of India and South Asia, said India's investment in Afghanistan "will not disappear just because the Taliban have taken over."

Some of New Delhi's most important projects include a highway that helps connect India to Afghanistan. The $150 million (€130 million) Zaranj-Delaram highway in southwestern Afghanistan was completed in 2009. It allows India to trade with Afghanistan through Iran's Chabahar port. The road link is significant for India because Pakistan does not allow New Delhi to transport goods to Afghanistan across its territory.

India also assisted in the construction of the Afghan parliament building in Kabul and a dam that generates electricity and irrigates fields.

India has built schools and hospitals, trained Afghan officers in its military academies and offered other technical assistance.

In 2017, New Delhi and Kabul opened a direct air freight corridor, which boosted the trade between the two countries.

Apart from these projects, India has committed about $120 million to develop various small and medium-scale projects, including education, health, water management and sports facilities, since 2005. It helped set up a Medical Diagnostic Center in Kabul in 2015.

As of July 2020, India had signed another five agreements for the construction of schools and roads worth $2.5 million.

At the 2020 Geneva Conference, Indian Foreign Minister S. Jaishankar said New Delhi would construct the Shatoot Dam in the Kabul district. The dam would provide drinking water to more than 2 million Afghans. Moreover, India would also undertake over 100 projects worth $80 million in Afghanistan, Jaishankar announced.

Why did India invest in Afghanistan?

India had supported the anti-Taliban resistance when the Islamic fundamentalist group ruled Afghanistan between 1996 and 2001. After the collapse of the Taliban's first government in 2001, New Delhi found an opportunity to increase its influence in the country.

Gautam Mukhopadhaya, the Indian ambassador to Afghanistan between 2010 and 2013, told DW that the main purpose behind investing in Afghanistan was to gain public trust and political goodwill.

"They were 'gifts' for the Afghan people," he said, adding that India, by no means, wanted to use the financial assistance as political leverage.

Afghan students in India dread having to return home

But some experts are of the view that India's objectives also included the political and democratic transformation of Afghanistan.

Atul Mishra, an expert on international relations and governance studies at the Shiv Nadar University, said India projected itself as a state builder to "ensure that a secure democratic and inclusive regime would illustrate the importance of political transformation in a predominantly Islamic country."

India and Afghanistan signed a strategic partnership agreement in 2011, under which India also assisted the Afghan military. New Delhi also wanted to make sure that anti-India Islamist militants didn't launch attacks on Indian soil from Afghanistan, according to Mishra.

New Delhi has repeatedly accused Pakistan of backing Islamist militants in the region as proxies against India.

Can India work with the Taliban?

India has always been critical of the Taliban, whom it considers close to its regional rival, Pakistan. But the Islamist group has hinted that it would like to have good ties with all regional countries this time around.

Mukhopadhaya said working with the Taliban could prove to be difficult.

"For instance, extending humanitarian aid through the Taliban is a complicated affair," he said.

Pande said it was crucial that India continue to deliver humanitarian assistance to Afghanistan, but not through the Taliban.

New Delhi is still skeptical of the Taliban. Pande said the Taliban's backing of the hijackers of an Indian Airlines flight in 1999 still lingered in the memory of most Indians.

Mishra is of the view that India has lost its leverage on Afghanistan after the US withdrawal from the country and the Taliban's swift capture of Kabul on August 15.

The experts say India now must wait to see how the Taliban's new regime deals with regional neighbors. Until then, Indian investments in Afghanistan will be in a state of limbo.