The World Health Organization has drawn sharp criticism from some quarters over its deference to Beijing and the way it handled the COVID-19 pandemic in recent weeks. 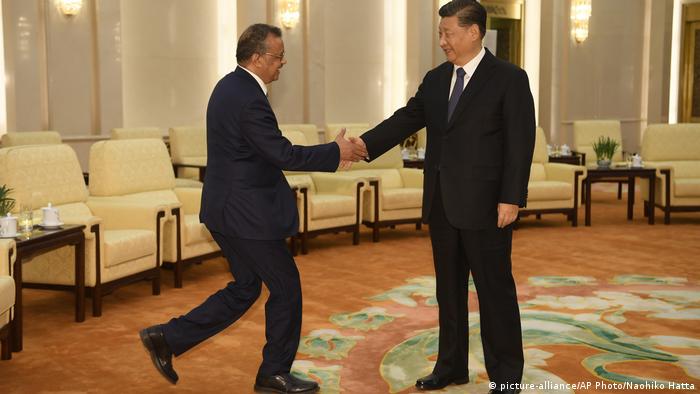 Over the past several months, the World Health Organization (WHO) has been thrust into the international spotlight as governments across the globe sought guidance on how to stop the pandemic caused by the novel coronavirus, officially called SARS-CoV-2.

The preeminent global public health institution, which counts among its ranks thousands of scientists and health experts, is uniquely positioned to guide and coordinate the world's response to the medical emergency. It is also able to bring together public health specialists from around the world to exchange information and review scientific data.

The agency, which is a trusted source of information about the pandemic, has been issuing recommendations on how to tackle the spread of the coronavirus, acting as a global coordinator as well as directing scientific data and experts to places where they are most needed.

But the WHO has drawn sharp criticism from some quarters over its handling of the public health crisis.

US President Donald Trump this week even announced a suspension of Washington's financial contribution to the WHO. The move stunned the world, not least because it came at a time when the globe is grappling with a pandemic that has no parallel in recent decades.

Trump said that the WHO "missed the call" on the novel coronavirus and blamed it for being "China-centric" and "severely mismanaging" the health emergency. The US president is not alone in criticizing the agency's alleged pro-China bias, with numerous health experts and political observers raising concerns about WHO officials' deference to Beijing.

At the end of January, WHO Director-General Tedros Adhanom Ghebreyesus met Chinese President Xi Jinping in Beijing and commended the country's efforts to control the outbreak. He also praised the Communist Party's top leadership for its "openness to sharing information" about the virus and its spread, even though Chinese officials in Wuhan — where COVID-19 cases first emerged — were cracking down on people for "spreading rumors" about the disease.

Initially, the WHO also advocated against limiting travel with China and recommended that countries keep their borders open.

Some experts argue that the WHO may have been worried that challenging Beijing in any way could have worsened the crisis by putting China on the defensive. "This could have potentially led to China sharing less information with the international community or to Beijing barring WHO experts from going to China," Thomas des Garets Geddes, a research fellow at the Berlin-based Mercator Institute for China Studies (MERICS) told DW.

"But this does not explain why the WHO lavished praise on China the way it did. Such excessive — and sometimes even misleading — praise was unnecessary and wrong," he added.

Another area of contention is the perception of China's growing influence over the institution.

Since its founding in 1948, money to the WHO has flown in two streams: assessments and voluntary contributions. Each member state is required to pay a certain amount to be part of the organization; this is called an "assessed contribution," and the amount depends on a country's population and economic development.

Voluntary contributions are donations from governments as well as partners such as charities and trusts, and the funding is usually earmarked for particular projects.

At the start of this century, the agency received almost half of its money as dues from member states, but that has now dropped to around 20% of its funds. This meant that the WHO has become more reliant on voluntary contributions to carry out its mandate.

Experts say this dependence leaves the WHO — which is lauded for its role in the elimination of smallpox, the near-eradication of polio and the fight against diseases like HIV, malaria and tuberculosis — highly susceptible to the influence of individual countries or organizations.

China's WHO contributions have grown in recent years, rising by 52% since 2014 to approximately $86 million.

Still, it pales in comparison to the United States which is by far the organization's largest donor. In 2018-19, Washington's total contribution to the WHO was $893 million. The US' donations make up about 14.6% of all voluntary contributions given globally.

The next member country with the biggest contributions is the UK, which paid $434.8 million in dues and donations during that period, followed by Germany and Japan.

Read more: Coronavirus could force China to rein in Belt and Road ambitions

Despite its low share in the WHO's overall funding, experts say China's rising financial contributions increase its heft, particularly at a time when the US is seen to be giving up on international organizations and threatening to cut global health funding.

"China's potential of becoming a major WHO contributor must necessarily be an alluring prospect for the UN agency," said MERICS expert des Garets Geddes.

Observers also point out that cooperation between the WHO and China has been on the rise, be it along China's "Health Silk Road" initiative or in support of the WHO's goal of universal health coverage by 2030.

"These are projects that matter to Tedros and the WHO," said des Garets Geddes. He also stressed that China's growing economic and diplomatic clout allows Beijing to influence political decisions and build coalitions across the world. "This is especially true in the 'Global South' — an important region for the WHO. The World Health Organization needs to have China on its side."

Critics also point to Taiwan's continued exclusion from the WHO as evidence of Beijing's influence. Since China acceded to the UN in 1971, it has periodically blocked Taiwan from membership in international organizations like the WHO on the grounds that the democratically governed island is part of China.

Read more: China accuses Taiwan of 'venomous' attacks on WHO

According to Taiwan's Central Epidemic Command Center (CECC), Taiwan warned the WHO about the possibility of human-to-human transmission of the coronavirus as early as December 31, 2019.

However, the CECC told DW that upon receiving the information, the WHO merely acknowledged that the information had been transferred to the relevant department.

"The WHO didn't take the information provided by Taiwan seriously, and we believe that led to the delayed global response to the COVID19 pandemic," the CECC said in a written statement to DW.

Taiwan is a highly sensitive issue for Beijing and counts as one of China's "core national interests," said Geddes.

"The WHO and its Director-General Tedros Adhanom must be all too aware that angering China over Taiwan could potentially put an end to their cooperation with Beijing. The WHO's ignoring Taiwan and treating it as if it were a Chinese province appears to be a direct consequence of these fears."