The German chancellor has expressed her full support for the UN health agency, saying a "strong international response" is the only way to end the pandemic. US President Trump has accused the WHO of failing its mandate. 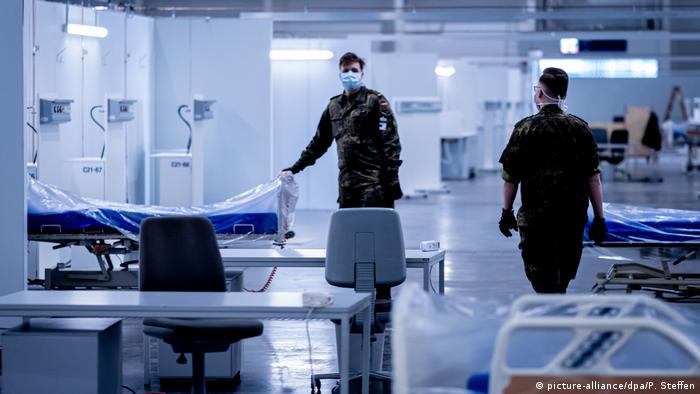 German Chancellor Angela Merkel has thrown her support behind the World Health Organization (WHO) as it tackles the devastating novel coronavirus pandemic, government spokesman Steffan Seibert said on Thursday.

"The chancellor stressed that the pandemic can only be defeated with a strong and coordinated international response," said Seibert. "To this end, she expressed her full support for the WHO and numerous other partners."

Merkel's comments were made during a video conference call with G7 leaders, just a day after US President Donald Trump announced he would suspend funding for the UN health agency.

Other G7 leaders also appeared critical of Trump's unilateral action against the WHO. Canadian Prime Minister Justin Trudeau said the other G7 leaders, including Italy's Giuseppe Conte and France's Emmanuel Macron, recognized the need for a multilateral response to the pandemic.

"The WHO is an important part of that collaboration and coordination," Trudeau said. "We recognize that there have been questions asked but at the same time it is really important that we stay coordinated we move through this. That's certainly what Canada is going to do."

'Throwing the pilot out of the plane'

Meanwhile, the White House said Trump's conversation "centered on the lack of transparency and chronic mismanagement of the pandemic by the WHO," adding that G7 leaders had urged a "thorough review and reform process."

On Wednesday, Trump announced he would suspend more than $400 million in annual funding to the WHO, saying the UN agency "failed to adequately obtain, vet and share information in a timely and transparent fashion."

The move was widely criticized in Europe. German Foreign Minister Heiko Maas said the funding freeze amounted to "throwing the pilot out of the plane in mid-flight."

"It makes no sense at all to question the functioning and significance of the WHO now," Maas said. He described the WHO as a the "backbone of the fight against the pandemic."

More than 140,000 people have died due to complications of the novel coronavirus and two million more have been infected. The pandemic has strained healthcare systems across the globe and led to historic social and economic disruption.

The WHO under fire

Saying a US shutdown was "not a sustainable long-term solution," President Trump announced guidelines to ease social distancing restrictions. The move came as other leaders extended lockdowns. Follow DW for the latest. (16.04.2020)

WHO says monkeypox does not amount to 'public health emergency of international concern' 25.06.2022

The UN health agency stopped short of giving the outbreak the label of highest alert, despite the viral disease being detected in more than 40 countries.