What if Facebook is forced to ditch Instagram, WhatsApp? | Business | Economy and finance news from a German perspective | DW | 11.12.2020 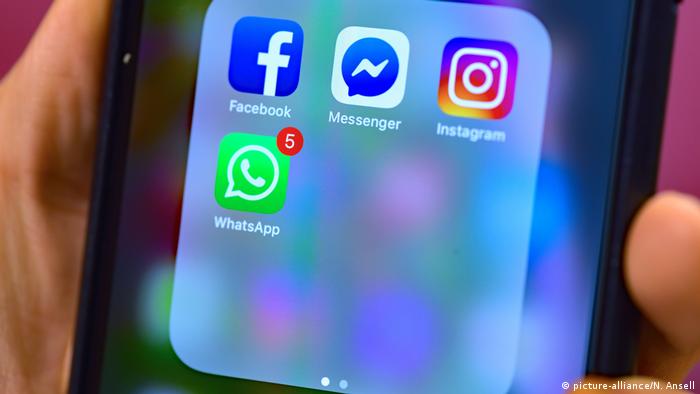 US antitrust regulators could force Facebook to sell Instragram and WhatsApp

Backed by attorneys general from 48 US states and districts, the US Federal Trade Commission (FTC) on Wednesday argued that social media corporation Facebook had harmed consumer choice and user data privacy with its unfair business practices. At the center of the conflict are questions surrounding the tech giant's motivations for acquiring photo-sharing platform Instagram in 2012 and messaging app WhatsApp in 2014.

The FTC argues that Facebook acquired the two apps in an effort to maintain its market dominance. For this reason, the company should be broken up.

Losing Instagram and WhatsApp would raise serious questions about Facebook's long-term viability. The popular apps were meant to play a significant role in the future of Facebook, whose use has plateaued in recent years.

Challenging Facebook before a federal court will be a serious undertaking, especially considering regulators reviewed the deals at the time and allowed them to go through. But the move is not without precedent, and experts believe the lawsuits have legs.

Facebook could find itself dismantled just like US telecommunications company AT&T was in the early 1980s, North Carolina Attorney General Josh Stein, one of the attorneys-general involved in the investigation, said in a statement.

Founded in the late 19th century, AT&T (American Telephone & Telegraph Company) flourished during the 20th century into a network of subsidiary communication companies scattered around North America . A telecommunications monopoly known as the Bell System emerged, named after the company's founder, the man credited with inventing the telephone, Alexander Graham Bell.

Antitrust regulators repeatedly went after the company for abusing its monopoly status. Finally, in 1982, facing the prospect of finally losing in court, AT&T agreed to break into seven smaller companies, many of which still operate today.

Microsoft nearly met a similar fate in the 1990s when a court ordered the tech company to split up its software and operating systems units into two entities. The firm dodged that fate with a financial settlement, but never quite recovered from the setback.

Big tech left out in the cold

The question now is whether regulators can rein in the digital powerhouses they have allowed to develop unchecked over the last two decades. In their beginnings, Facebook, Google, and the other Silicon Valley darlings faced little regulatory pushback. On the contrary, many in power lauded them as innovators, saying they would lead the US to global tech dominance and create thousands of jobs along the way.

These companies delivered on both fronts. And this look-the-other-way mentality was probably partly responsible for the FTC's decision to allow the acquisitions of WhatsApp and Instagram.

"Our acquisitions of Instagram and WhatsApp have dramatically improved those services and helped them reach many more people. We compete hard and we compete fairly," founder and CEO Mark Zuckerberg told employees in response to the suits. "I'm proud of that."

"The government now wants a do-over, sending a chilling warning to American business that no sale is ever final,'' Facebook General Counsel Jennifer Newstead said in a statement.

The atmosphere for Big Tech has certainly gotten colder. Six years and at least as many scandals since buying WhatsApp, public and political opinion have both begun to sour on the Silicon giants. This week alone, regulatory bodies around the globe have come out with laws and fines meant to deal blows to the likes of Facebook, Apple, Google, and Amazon. In October, the US Department of Justice brought its biggest antitrust suit in decades, accusing Google of abusing its gatekeeper position in online search and advertising.

The Facebook suits differ from the one aimed at Google in its explicit call for WhatsApp and Instagram to be broken off. While such a drastic move would be unlikely to happen in the short term, people familiar with the matter think the lawsuits could lay the groundwork to dismantle Facebook.

"There's a pretty strong chance a judge will find a violation of the antitrust laws," antitrust law professor at the University of Miami John Newman told Bloomberg News. A breakup would be the "default" next move, he added.

It's "hard to win any antitrust lawsuit and this one is not any different," added law professor at Vanderbilt University Rebecca Allensworth. But in terms of antitrust cases, the government had a strong one, she said.

The political climate won't be getting friendlier anytime soon. Tech giants already faced a lot of pressure under the Trump administration, and US President-elect Joe Biden has said splitting up companies like Facebook should be considered. The fact that the topic has become a bipartisan issue in the US is among the biggest concerns for those in Silicon Valley.

The new Facebook lawsuits highlight a clarity of purpose and sense of momentum that could tilt the balance of power in the digital realm. Next week, the European Commission plans to unveil new legislation regarding digital services and the digital economy in the European Union. There as well, big consequences for the likes of Facebook are expected.