The UN's World Food Program has issued its latest report on food crises, as children's agency UNICEF warns of an increase of cases of cholera in Somalia. Armed conflict and natural disasters are the main causes. 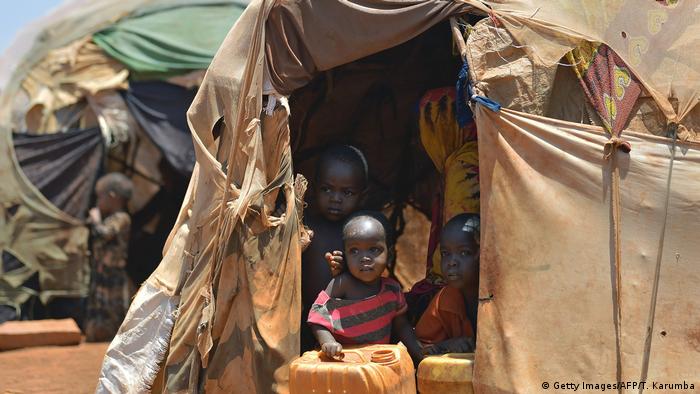 A report by the World Food Program (WFP) released Friday revealed the number of people deemed "severely food insecure," or vulnerable to starvation, grew from 80 million in 2015 to 108 million in 2016.

The WFP definition of "severely food insecure" are people who are already suffering from acute malnutrition or lacking enough food for basic needs on a sustainable basis.

The WFP "Global Report on Food Crises" took data from a number of different agencies including those working from the EU and US.  The report statedarmed conflict was the main reason for nine of the 10 worst humanitarian crises in 2016. Natural disasters were also cited as a major cause.

"The cost in human and resource terms only increases if we let situations deteriorate," said the UN's Food and Agriculture Organization (FAO) Director-General José Graziano da Silva. "We can prevent people dying from famine but if we do not scale up our efforts to save, protect and invest in rural livelihoods, tens of millions will remain severely food insecure."

Some 25.5 million people in Yemen, Syria and South Sudan are in need of immediate aid, according to the WFP report. All three countries are in the midst of intense conflicts, which have led to food shortages and deaths from starvation and related illnesses.

Northern parts of Nigeria have suffered from severe drought, making it difficult to produce food. The report stated that 8.1 million people in northern Nigeria are severely food insecure. Droughts also affected Ethiopia and Malawi last year, leading the WFP to report 16.4 million people in those two countries were at risk of starvation.

The WFP said food insecurity was expected to worsen in 2017, particularly in northern Nigeria, South Sudan, Somalia and Yemen and the four nations were at risk of famine and required immediate aid.

"This report highlights the critical need for prompt and targeted action to effectively respond to the food crises and to address their root causes," said Commissioner for International Cooperation and Development Neven Mimica.

"It's a race against time – the world must act now to save the lives and livelihoods of the millions at the brink of starvation," said Cousin. 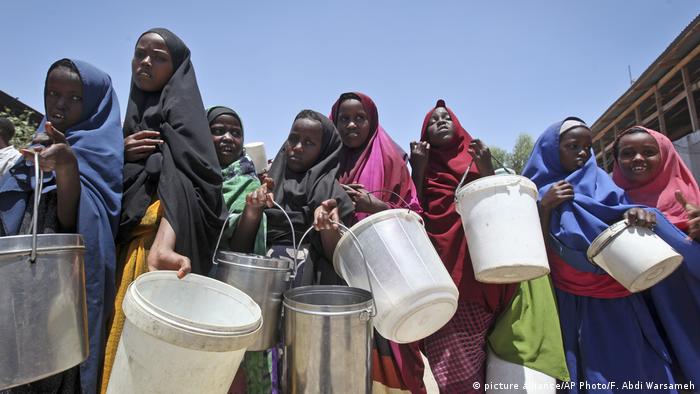 Waiting for water at a center in Mogadishu

Also this week, the UN's childrens agency UNICEF reported an increasing number of children suffering from severe acute malnutrition and cholera or diarrhoea.

As of 28 March, more than 18,400 cases of cholera and diarrhoea had been reported since the beginning of the year, far surpassing the 15,600 cases reported in all of 2016. The majority of the cases were among young children.

"These numbers are a wake-up call,” said Leila Pakkala, UNICEF Regional Director for Eastern and Southern Africa, after speaking with displaced families and patients at a cholera treatment centre in Baidoa, Somalia. “Children are dying from malnutrition, hunger, thirst and disease.  During the 2011 famine, around 130,000 young children died, about half of them before famine was declared. We are working with partners around the clock to make sure that doesn’t happen again."

Over 20 million are facing famine and starvation in four countries, the UN humanitarian chief has warned. He has urged the Security Council to provide funds and aid access to prevent "these looming human catastrophes." (11.03.2017)

A proposal for an arms embargo was supported by the United States in December, but the plan was rejected by the UN Security Council. Could the international body be ready to change its position as suffering continues? (18.03.2017)

Civil war and geopolitical rivalries have brought Yemen to the brink of collapse two years since a Saudi-led intervention against Houthi rebels. With famine looming, all signs point to the situation getting worse. (24.03.2017)