Western defense chiefs agree to boost fight against 'IS'

Defense ministers from seven countries have vowed to intensify the fight against the "Islamic State." A key part of the strategy is uprooting the group from two of its power centers in Syria and Iraq. 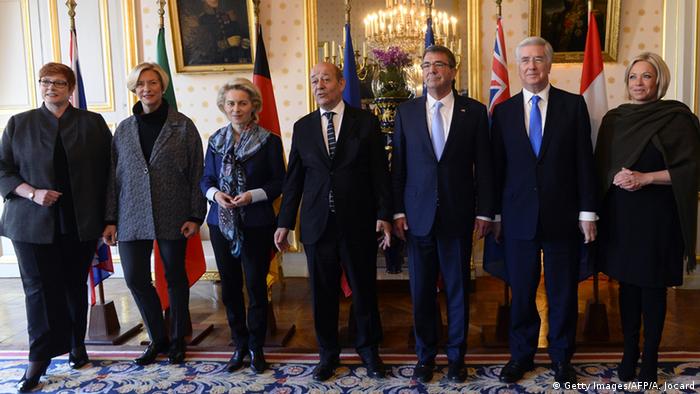 US Defense Secretary Ash Carter said Wednesday there was "broad agreement" on a plan to accelerate the campaign against IS over the next year, as defense officials said they had made progress pushing back the Sunni extremist group.

"We agreed that we all must do more," Carter said in Paris after meeting with the defense ministers of France, Australia, Germany, Italy, the Netherlands and the United Kingdom.

The US plan envisions coordination among nations fighting IS and backing Iraqi security forces and Kurdish peshmerga to take Mosul in northern Iraq, while across the border working with Syrian Kurdish and moderate Arab forces to put pressure on IS' self-declared capital in Raqqa.

The US-led coalition must focus on "collapsing its two power centers in Raqqa and Mosul," Carter said.

The US defense chief added that defense ministers from Iraq and 26 nations in the anti-IS military campaign would meet in Brussels in three weeks.

The US is asking countries to increase their contribution to the campaign, including special forces, fighter and reconnaissance jets, drones, training and weapons and munitions. It's also calling on Gulf Arab states and other countries in the region to become more involved.

Initially active in the coalition, Gulf Arab states led by Saudi Arabia have been distracted fighting a war in Yemen against what they claim are Iran-backed Houthi rebels.

Steady progress being made

France's Defense Minister Jean-Yves Le Drian said the anti-IS campaign is "bearing fruit" and the terror group is in retreat.

"Now is the moment to increase our collective efforts and implement a coherent collective strategy," Le Drian said.

British Defense Minister Michael Fallon said the goal is now to "identify how we can tighten the noose around the head of the snake."

Russia is carrying out a separate air campaign in support of the Syrian regime against IS and US- and European-backed rebel groups. The three defense chiefs criticized Russia for undermining cooperation and targeting Western-backed rebels and not IS. Russia argues it is attacking IS and other terrorist groups.

Nonetheless, they acknowledged any solution against IS involves kick-starting a UN-backed political solution to the conflict in Syria schedule for next week. As the Syrian regime's main backer Russia is pivotal to those talks.

Experts track down stolen art from Syria and Iraq

The strategy of using local ground forces backed by the military support of the coalition has reversed IS gains, most notably the Iraqi army's recent success is retaking Ramadi and Kurdish peshmerga wresting control of Sinjar.

Across the border, joint Syrian Kurdish and moderate Arab forces have taken significant amounts of territory from IS in northern Syria, cutting the group off from supply routes along the Turkish border.

However, questions remain whether Kurdish peshmerga and Iraqi security forces are ready to take Mosul, Iraq's second largest city. In past operations to take smaller cities from IS, Iraqi security forces made slow progress against snipers, car bombs and booby traps. Pounding the city of more than one million people with airstrikes is also likely to displace tens of thousands of people and result in significant civilian casualties.

The Kurds may also be hesitant to enter the largely Arab city, while there are also long simmering tensions between the Kurds and the central government in Baghdad.

In Syria, most of the fighting and battlefield successes against IS have been led by Kurdish forces, who could potentially face hostility from a local Arab population in any assault on Raqqa. A joint Arab force supported by the anti-IS coalition is aimed at making any assault on the city more sustainable.