The UN has highlighted in a new report the high number of killed, wounded and displaced civilians in Iraq last year. The report puts special emphasis on atrocities committed by the "IS" terror group.

At least 18,800 civilians have died in Iraq in 2015 according to a report released on Tuesday.

The UN Assistance Mission for Iraq (UNAMI) and the Office of the High Commissioner for Human Rights (OHCHR), who together compiled thereport, also stated that roughly 36,240 civilians have been wounded and 3.2 million more displaced.

"The violence suffered by civilians in Iraq remains staggering," the report said. It noted that half of the deaths occurred in Baghdad. 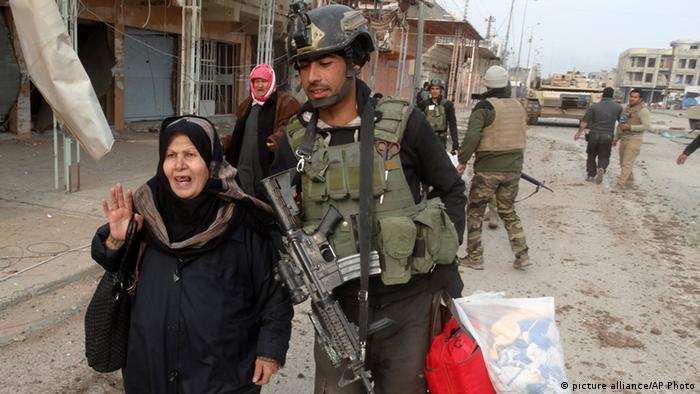 The report put special emphasis on atrocities committed by the so-called "Islamic State" (IS), accusing the terrorist organization of targeting civilians, including dissidents, journalists, police officers and former officials.

The UN said the group "continues to commit systematic and widespread violence and abuse international human rights laws and humanitarian laws in acts which may, in some instances, amount to war crimes, crimes against humanity, and possibly genocide."

IS was also responsible for numerous public executions, which included death by shooting, beheading, bulldozing and burning alive.

UN Secretary-General for Iraq Jan Kubis reiterated the need to ensure the safety of civilians.

"I also call on the international community to enhance its support to the Government of Iraq's humanitarian, stabilization and reconstruction efforts in areas liberated from [IS]," Kubis said in a press release.

Syria's civil war seems to be intensifying, as "IS" militants and pro-government forces fight over territory. Casualties among civilians are rising, and the jihadists have also been accused of abducting hundreds of them. (17.01.2016)

Experts track down stolen art from Syria and Iraq

Experts from Syria are working together with German authorities to track down art stolen in Syria and Iraq. Much of it turns up on the internet. IS fighters are selling plundered art to fund their conquests. (13.01.2016)

Gunmen set off suicide vests inside a Baghdad shopping complex and a car bomb exploded nearby in attacks claimed by the 'Islamic State' (IS) group in Iraq. Two bombs went off in the eastern town of Muqadadiya. (12.01.2016)