German Chancellor Angel Merkel assured Balkan states that negotiations to join the EU are in the bloc's interest, countering concerns by the French president, who insisted EU reforms must come before further enlargement. 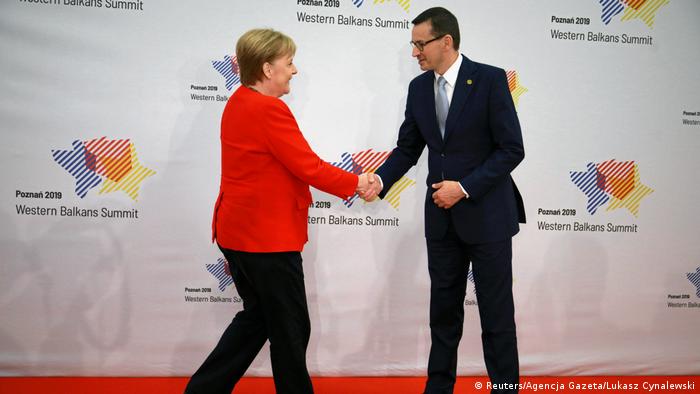 Attending the Western Balkan conference in the Polish city of Poznan, German Chancellor Angela Merkel sought to reassure North Macedonia and Albania as well as other Balkan states that the EU had a "strategic responsibility" in the region and that she was "optimistic" about accession talks, especially with regard to North Macedonia.

"I look to autumn with optimism," she told reporters at the conference, referring to the bloc's commitment to find a starting date for talks with North Macedonia and Albania no later than October.

Her comments appeared to contradict French President Emmanuel Macron, who insisted that the bloc needs to reform itself first before admitting new members. He is worried that the EU's often unwieldy structures are increasingly hampering decision-making, even at its current size.

However, Merkel told reporters that she didn't see Macron's comments as a "dismissal of accession talks," and that both the talks and EU reforms could happen in parallel.

"We do not just need tolerance in Balkan countries, we need secure countries governed by the rule of law, we need independent courts," Altmaier said. "Corruption must be tackled. That we are happy to discuss as friends."

The conference discussed EU integration for six Balkan nations. Germany initiated the discussions for their integration into the bloc in 2014.

Representatives from Serbia, Albania, North Macedonia, Bosnia-Herzegovina, Montenegro and Kosovo — all of which are EU candidate countries — were present at the conference.

Altmaier said their accession to the EU would entail "a huge economic boost" for the EU.

The EU wants "to help other countries to align themselves to our market standards and thereby to open opportunities for the German and European markets," he said. Progress towards EU membership depended however on the success of the talks and democratic developments in the Balkan states.

Trade between the EU and Serbia has doubled in the last four years, and trade with the bloc as a whole has increased by 130% in the last decade.

Since talks on EU accession began in 2014, the EU has raised concerns over bribery and corruption in all of the candidate countries.

Corruption watchdog Transparency International's annual report on perceived corruption around the world gave the Balkan countries low scores again in 2019. Albania had the worst score for the region, closely followed by Kosovo and North Macedonia.