The Cameroon International Film Festival came to an end this weekend. In West Africa, interest in local films is booming and more and more young people are dreaming of an acting career. 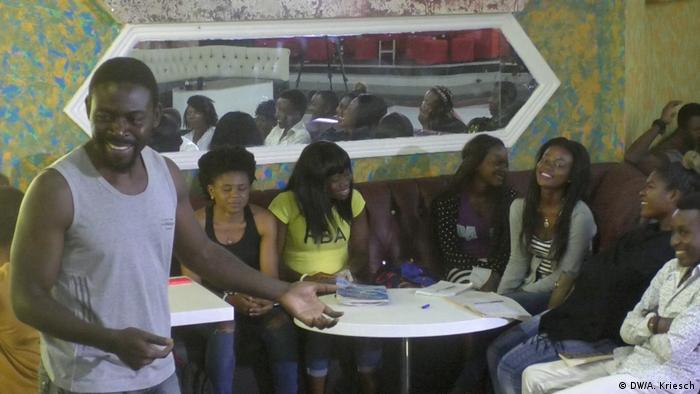 When Anurin Nwunembom speaks about acting, almost 40 young people stare at him with bright eyes. "To properly prepare for a role, you must first read the script at least nine times," says Nwunembom. Filden Mojoko nods: "Hollywood, that's the dream," says the 23-year-old political student.

Many people at this drama workshop share the same dream: making it big in Hollywood. Or in Nollywood, Nigeria's massive film industry. Or here at least, in the small English-speaking region of Cameroon. The participants came to Bueal for the Cameroon International Film Festival (CAMIFF), which also hosts a workshop for budding actors. 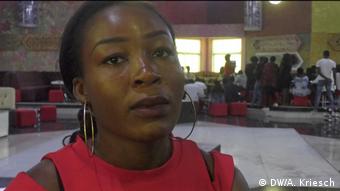 Cameroonian student Filden Mojoko dreams of a career in Hollywood

"Pretty much everyone is fascinated by the dazzle and the glitz and glamour," says acting coach Anurin Nwunembom. "You just want to be a part of it and live the life of a star."

But Nwunembom also knows the harsh reality of the business. There is hardly any state funding, training opportunities or money. Nwunembom is one of the few people in western Cameroon who can make a living off of his film career. Production budgets are sometimes only $2,500 (€2,079) for a full movie, leaving nothing left for the actors. If you're lucky, you might be able to sell your work to a foreign TV station. Otherwise, one can only hope for donations from politicians or businesspeople at film premieres. Or let hawkers sell CDs for less than a euro.

"It's the passion that drives us," says Nwunembom. "But we have a big problem because there is no real economic film industry here." 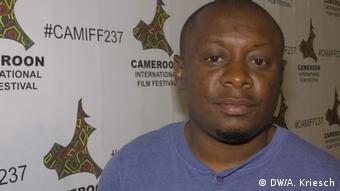 The film festival in Bueal is supposed to trigger an upswing for the industry, says Agbor Gilbert Ebot. The film producer launched the festival three years ago — also as a way to attract potential film buyers from English-speaking countries. Ebot and his team are in a constant state of stress during the festival: organizing film broadcasts, picking up artists from the airport, making arrangements for VIPs, dragging chairs into function rooms. All while urgently trying to secure much-needed sponsorship deals.

"The companies in Cameroon do not respect their social corporate responsibilities, says Ebot. "And even the government has not done enough." Hardly any high-ranking government official can be seen at the festival.

A festival in a conflict-ridden region

The English-speaking part of Cameroon is a minority in an overwhelmingly francophone country — only one in five Cameroonians identify as an anglophone. Many inhabitants feel disadvantaged by the government in the capital, Yaounde. Peaceful protests last year were brutally suppressed by the government. Since then, several rebel forces have been formed in order to fight for independence through the use of violence.

In Buea, the situation also remains strained. At night, heavily-armed military trucks patrol through the city. If you don't have identification, you will be sent straight to prison. For this reason Ebot needs to be at the police station at 6 o'clock in the morning after three festival guests were picked up by authorities in the evening on the streets without identification and forced to spend the night on the floor of a stinking cell.

But despite all the problems, there is still reason to be optimistic — Zack Orij is sure of that. The Nollywood veteran from Nigeria has already made several films in Cameroon. He isn't just at the festival to receive a lifetime achievement award — he is also one of the trainers at the drama workshop. 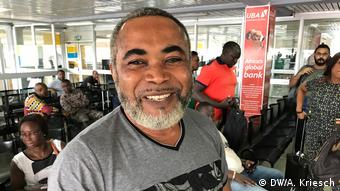 "We want to help them build a local industry and get them to where Nollywood is," Orij told DW. Nollywood is now an important industry in Nigeria, producing even more films than Hollywood. The filmmaker and actor wants to produce and buy more local content in the future from across the continent. For a recent production in Ghana, he needed actors from Rwanda — but he could not find enough suitable candidates. So he organized a workshop for acting beginners. More than 400 people turned up and he gave some of them a contract. Further workshops are expected to follow and will train up to 3000 actors a year. According to Orji, the demand is huge.

Acting coach Nwunembom hopes the film industry will become a job creator and eventually an economic sector. Despite financial difficulties, the quality of the films has improved dramatically in recent years. The Cameroonian films shown at the festival reflect this.

On their way out, Nwunembom gives his students some advice: filmmakers and actors must remain patient, rely on their strength and see obstacles as an opportunity to live out their own creativity.

Female filmmakers in Africa face many hurdles, from sexual harassment to the belief that women have no place in the movie industry. That isn't stopping them from telling women's stories on film. (08.03.2018)

The film industry in Africa is blossoming as more original stories emerge from the continent. If the packed theaters in Cologne are any indication, then the African film industry is on the rise. (21.09.2016)