WEF in Vietnam: The tiger leaps

The World Economic Forum on ASEAN countries has begun in Vietnam — a fitting host given its status as the fastest-growing economy in Southeast Asia. Manuela Kasper-Claridge reports from Hanoi. 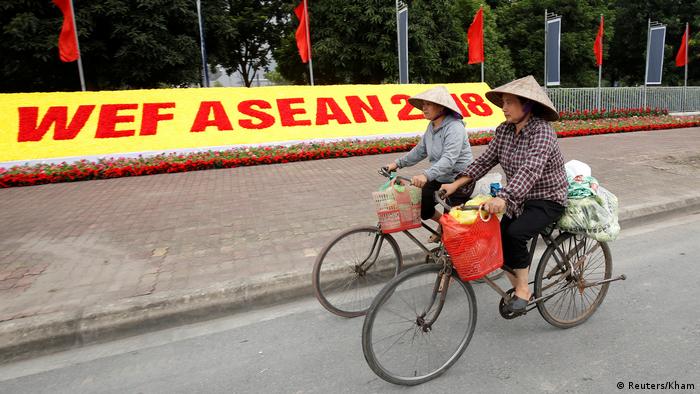 The bridge across the Bach Dang is brand new. Twenty-five meters (82 feet) wide and 3 kilometers (1.8 miles) long, it spans majestically across the large mouth of the river near the port city of Haiphong in northern Vietnam.

There is a lot going on here; the Chinese border is less than 200 kilometers away. Massive trucks laden with wood and industrial goods clog the road, transporting cargo from the ships inland. Up on the bridge, some Vietnamese tourists stop their cars illegally on the side of the road to pose for selfies. The backdrop is impressive: a sweeping view of the large container ships and vast bay.

Read more: The ASEAN way: Where is it leading?

According to estimates by the Asian Development Bank, the Vietnamese economy is expected to grow by 6.7 percent this year after 6.8 percent last year, with unemployment remaining low at just over 2 percent.

"The investment climate is good," Marco Walde from the German Chambers of Industry and Commerce in Vietnam told DW. "As a foreigner, you can start a company here and retain 100 percent ownership. A joint venture is not necessary."

Vietnam's communist government is betting on the free market, without state intervention in private business. But Vietnam's state-owned enterprises are still favored. They get easier access to loans and only face limited competition. But their machinery and management structures are often outdated. That's an area where Walde sees a significant need to modernize. 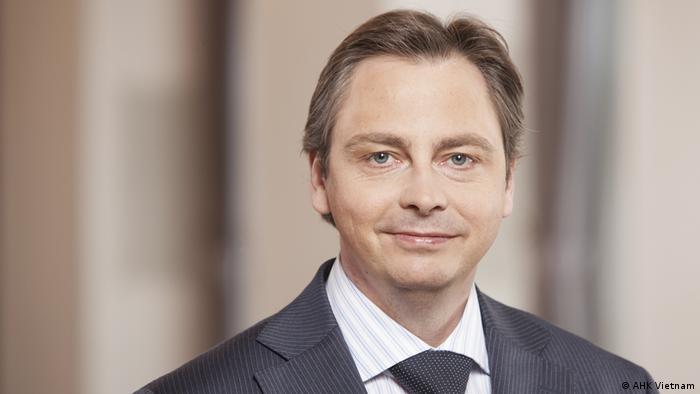 Marko Walde, managing director of the German Chambers of Industry and Commerce in Vietnam

Don't only bet on China

Nonetheless, investments in Vietnam are being seen as an attractive complement to those made in China. Companies and the Vietnamese government broached the "China plus 1" formula some time ago. It's the idea that investors shouldn't just bet on the Chinese market, but also invest in at least one other Asian country as a way to hedge possible risks.

An example of how big the risks can be is the impact of current US punitive tariffs on Chinese products. With its almost 94 million people, Vietnam is a big market and the population is young — the average age is just 29.

Read more: The winners and losers of China's downturn

And there is a great pent-up demand. On the 120-kilometer drive from the capital, Hanoi, to the port city of Haiphong, one construction site follows the next. Luxury housing complexes for the growing middle class are going up and in the process anything old gets torn down without mercy.

Big posters advertise swimming pools and green spaces. Some of the new housing complexes are protected by private security services. Anyone who wants to get through the gate, needs to show ID. Developers call this the "Premium Living" model.

Cars 'Made in Vietnam'

Now there are even plans to build a Vietnamese car. The private company Vinfast is building its own production facilities on 335 hectares (872 acres) in Haiphong's Dinh Vu-Cat Hai Economic Zone.

Within just one year, huge production halls have sprung up on the once muddy grounds. Excavators and heavy trucks tirelessly move rubble and construction materials. A beautiful green space already adorns the entrance area, while hundreds of engineers are busy at work in the research and development center. 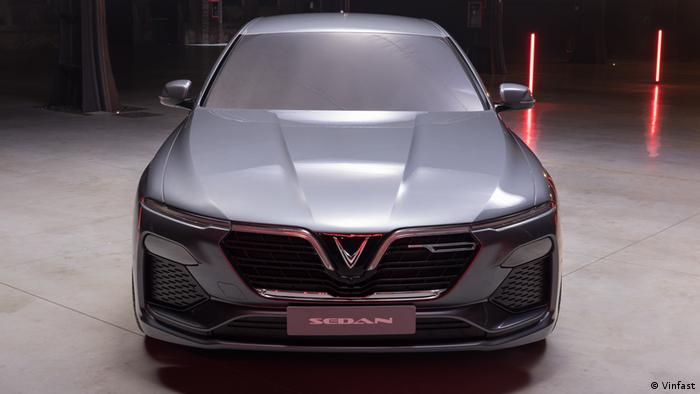 A model called Sedan from Vinfast

Vinfast is a subsidiary of the real estate and industrial conglomerate Vingroup. In late 2018, the company wants to launch the first electric scooter that is "Made in Vietnam." After that, they plan to build an SUV and develop their own electric car.

"Even now, this project is a magnet," says Vo Quang Hue, deputy CEO of Vingroup. He worked for German companies in the automotive industry for almost 30 years and later for Bosch. Now those connections are coming in handy.

Since September 2017, Vinfast has had cooperation and supply agreements with BMW, Bosch, Siemens and ZF Friedrichshafen, among others. Vo is particularly proud of the company's own training center, which was founded in cooperation with the German Chambers of Industry and Commerce.

The plan now is to train 200 mechatronic engineers and industrial mechanics per year. More than 4,000 applicants competed for the first of those apprenticeship positions.

What's the role of Europe in a world torn between free trade and protectionism? A panel at the World Economic Forum in Davos took a closer look at what the European Union might have to offer. DW's Andreas Becker reports. (25.01.2018)

Vietnam is hosting this year's Asia Pacific Economic Cooperation (APEC) summit, which gives it an opportunity to tout the benefits of global free trade. But convincing protectionists like Trump remains an uphill task. (09.11.2017)

Vietnam has launched an investigation into a multi-million-dollar cryptocurrency scam, ordering a crackdown on trading in the highly-popular iFan and Pincoin digital currencies in its lightly regulated market. (12.04.2018)