′Warlord′ Afghan vice president returns from exile to ease political tension | Asia| An in-depth look at news from across the continent | DW | 23.07.2018

Accused of rape and torture, Abdul Dostum, a notorious warlord and Afghanistan's vice president, has returned from exile. He was greeted in Kabul by throngs of supporters — and a deadly bomb attack. 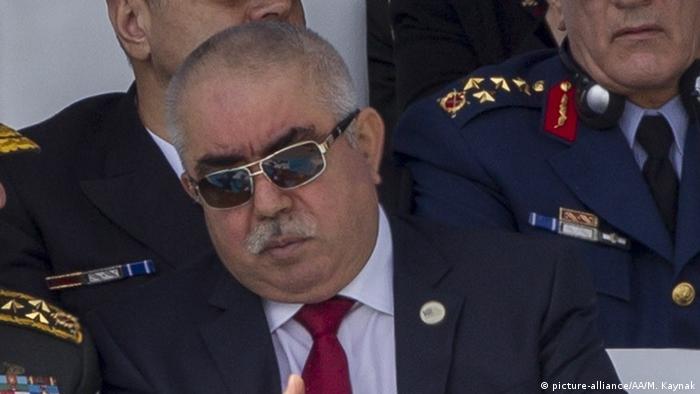 Afghanistan's vice president, General Abdul Dostum, returned to Kabul from a 14-month exile in Turkey on Sunday and was greeted by a media spectacle, along with throngs of supporters and political allies who gathered at the Kabul airport.

In a speech after arriving, Dostum said he would support peace and help drive forward talks with the Taliban. It was a more subdued tone from the notorious warlord, who has a reputation of being brutal and ruthless towards his enemies.

Only minutes after Dostum's convoy left the airport, a suicide bomber detonated an explosive device near the entrance and killed at least 23 people, including both civilians and security forces. More than 100 people were also reported wounded. The general and his entourage were unharmed. Militants affiliated with the so-called "Islamic State" (IS) claimed responsibility for the attack. 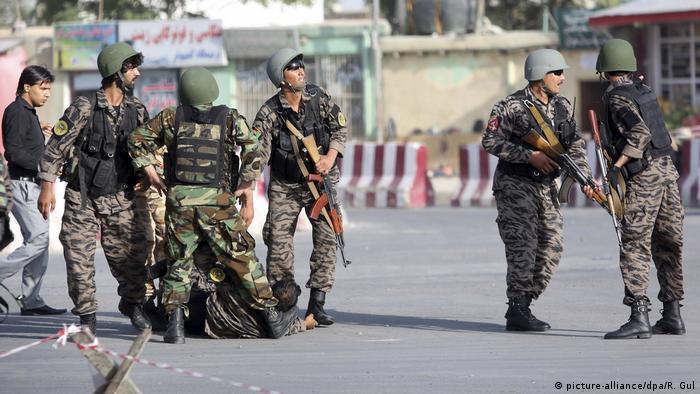 Many people across northern Afghanistan, where Dostum's political base is located, had been demanding his return and the release of his famous ally Nizamuddin Qaisari, a district police chief in the province of Faryab.

Additionally, thousands of Afghans in the northwest of the country were holding demonstrations against the government, according to Obaid Ali, an expert with the Afghan Analysts Network.

"The pressure seems to have produced some effect," Ali told DW.

After his arrival, Dostum asked his supporters to stop demonstrating and go back to work, which put an end to the protests.

Experts say the Afghan government has managed to avert a crisis by bringing the warlord back to Afghanistan. His return calmed his supporters and relieved a tense political situation in northern Afghanistan, but there are still unresolved issues to manage for Afghanistan's President Ashraf Ghani.

Allegations of torture and rape 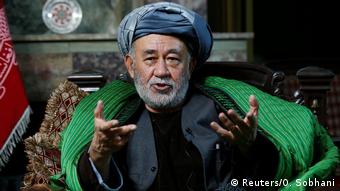 Amhad Ishchi said he was abducted, tortured and raped by Dostum

General Dostum left Afghanistan a year ago, after his political opponent and former governor of Jawzjan province, Ahmad Ishchi, accused Dostum of abducting, torturing and raping him.

After pressure to act against Vice President Dostum was exerted by Western diplomats, President Ghani's government framed charges against the warlord last year.

However, despite Ghani's relentless efforts, he was unable to convince Dostum to stand trial. The president then sought help from Turkish President Recep Tayyip Erdogan. After months of mediation, Dostum finally left Afghanistan. Despite opposition from Western diplomats, the vice president continues to enjoy Turkish support.

"The first vice president will be in Kabul during a government ceremony and will also retake his seat in office," Haroon Chakhansuri, a spokesperson for the Afghan president announced a day before Dostrum's return. "The subject of the legal case, which is related to the judiciary and judicial institutions, will be dealt with independently."

However, this explanation left observers with many unanswered questions.

"The president has to explain to his people why he exiled Dostum in the first place," Jebran Larwand, an Afghan political analyst told DW. "Then he has to clarify why he now decreed him to return to the country."

For many Afghans, Dostum's return to Kabul symbolizes the government's lack of control over Afghan warlords and strongmen. It is still unclear if the legal proceedings against Dostum will be continued.

War-ravaged Afghanistan's political landscape is still dominated by men who have held power since the country's civil war in the late 1980s. Almost all of them are accused of war crimes by Western human rights organizations.

"General Dostum's case is a legal case," said Obaid Ali. "President Ghani himself said in one of his statements that the judicial system will deal with this case, but of course, these pressures and demonstrations in Faryab produced an effective result," he said, adding that Dostum's supporters pressured the government to allow for his return and restore his authority.

Experts say President Ghani has allowed Dostum's return in order to calm the heated situation in northern Afghanistan and to regain the support of the Uzbek population, who overwhelmingly support Dostum.