The European Commission president said EU countries must show solidarity with one another. Member states not reliant on Russian gas are being asked to step up and assist those with reduced supplies. 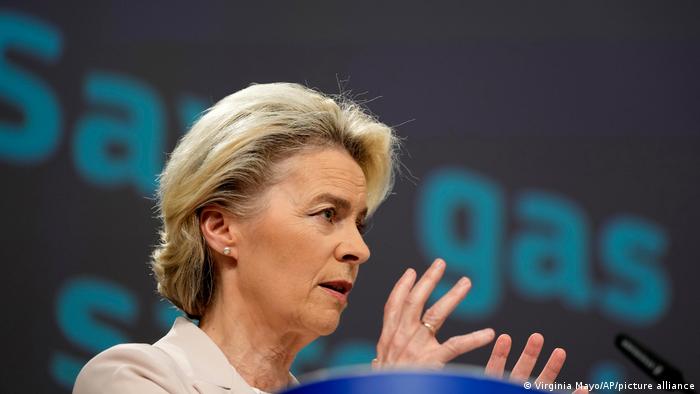 Von der Leyen noted that EU economies are so interconnected that a gas crisis in one state, such as comparatively well-off Germany, would affect other national economies.

"That is why it is important that all member states curb demand, that all store more and share with those members that are more affected," she added.

How is the EU preparing for the coming gas crisis this winter?

On Tuesday, a special meeting of EU energy ministers is scheduled to discuss the coming crisis this winter when Russia is likely to restrict or potentially cut off supplies entirely.

EU officials and European leaders have expressed grave concern over the possibility of gas curbs as Western sanctions take a bite out of the Russian economy and as losses from the country's war against Ukraine mount.

The European Commission would like to see EU countries across the bloc reduce gas consumption by 15% from August 1 until March 31 in the case that burden sharing needs to become a reality. Spain and Portugal objected, with Portugal calling the request "untenable" and arguing it consumes only what is an "absolute necessity."

The EU would also like to make further gas consumption reduction requests possible.

While such proposals have met great resistance, von der Leyen expressed confidence a deal could be made within the bloc.

How is Germany preparing for the winter?

Klaus Müller, the head of Germany's Federal Network Agency in charge of the country's gas supplies, said the current rate at which gas storage facilities are being filled is satisfactory.

The gas storage facilities are "finally back on a proper storage path," Müller wrote on Twitter.

The news comes after German gas storage facilities were kept at very low levels while the Nord Stream pipeline was shut for repairs. To avoid such a situation come winter, Germany wants to guard as much supply as it can at present.

Kremlin spokesman Dmitry Peskov criticized German Chancellor Olaf Scholz's comments about the reliability of Russian gas supplies, calling them "in absolute contradiction to reality and the history of deliveries." Russia has shut off gas supplies to neighboring countries such as Ukraine and Bulgaria as a means of sending a message in the past.

German gas importer Uniper just received a government bail out as it teetered. By November 1, Germany hopes its gas supplies are at 95% capacity.

Report written with material from dpa.