Despite the Dieselgate emissions scandal, the German carmaker says it sold a record number of vehicles last year. But VW's growth in Western Europe was more sluggish than in the rest of the world. 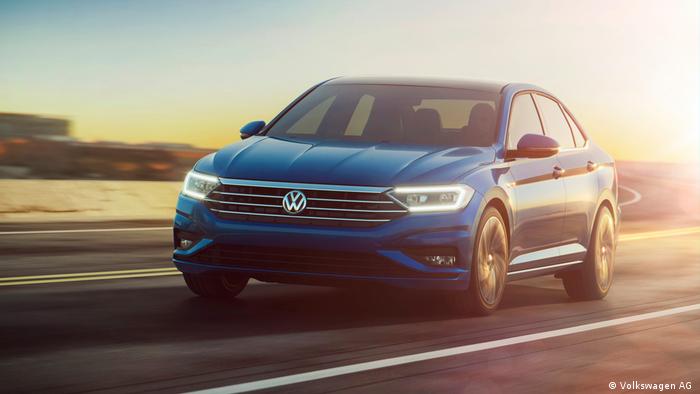 Volkswagen Group said on Wednesday that VW and its 11 subsidiary brands sold 10.7 million vehicles in 2017, a 4.3 percent increase on the previous year.

The growth means that the company has likely overtaken its nearest rival to become the world's largest car producer for the year.

The figures — which include sales of Porsche, Audi, Skoda and Seat among other brands — were highly anticipated, coming in the wake of the emissions cheating scandal that rocked the German automaker for the past two years.

Released to coincide with the Detroit International Auto Show, the figures suggest the Wolfsburg-headquartered firm has suffered little reputational damage from the embarrassing affair known as Dieselgate, despite being forced to set aside €25 billion ($31 billion) to pay penalties and fines.

"We are grateful to our customers for the trust these figures reflect," VW chief executive Matthias Mueller said in a statement.

"We will continue to do everything we can to meet and exceed the expectations of our customers all over the world."

Growth in China, the US and South America

Volkswagen saw spectacular growth in South America but from a low base, with sales reaching 522,000 — up 23.7 percent, compared with a more sluggish result from mature markets like Western Europe — where it shipped 3.6 million vehicles. Germany was the only region where sales fell, by 0.4 percent, although they rebounded 5 percent in December. In December alone, Volkswagen's global deliveries increased by 8.5 percent on the same period in 2016 to just under one million units.

Rivals too close for comfort

Although it beat its nearest competitor, Toyota — whose figures for 2017 reached some 10.35 million units — VW faces a growing challenge from the Renault-Nissan-Mitsubishi alliance, which said on Wednesday it sold 10.6 million vehicles last year.

The alliance argued that VW's figures included 200,000 heavy trucks, which shouldn't be included in its total.

Volkswagen revealed sales figures solely for its VW branded vehicles separately on Sunday, announcing they rose 4.2 percent in 2017 to 6.23 million, helped by an expanding line-up of sport-utility vehicles including the all-new Atlas and Teramont models.

Also on Wednesday, data showed overall sales of new cars in the European Union broke through the 15-million threshold for the first time since the 2007/08 financial crisis.

Some 15.1 million vehicles were sold in the 28-member bloc, up 3.4 percent on 2016, the European Automobile Manufactures Association (ACEA) said in its monthly bulletin.

Demand for new cars rose in all major EU markets except in Brexit-affected Britain, where sales fell by 5.7 percent year-on-year, the first annual decline in six years.

General Motors, Toyota and Volkwagen are among the members of a new coalition to urge the United States to remain in the NAFTA trade deal. President Trump threatened to withdraw from it for a number of reasons. (24.10.2017)

European Union anti-trust regulators have raided more German automakers, days after they made a similar swoop on the offices of BMW. It’s a fresh blow to the country's beleaguered auto industry. (23.10.2017)