The head of the world's biggest carmaker Volkswagen has issued an unprecedented call to end tax breaks for diesel fuel in Germany, saying the technology must make way for cleaner ways of driving. 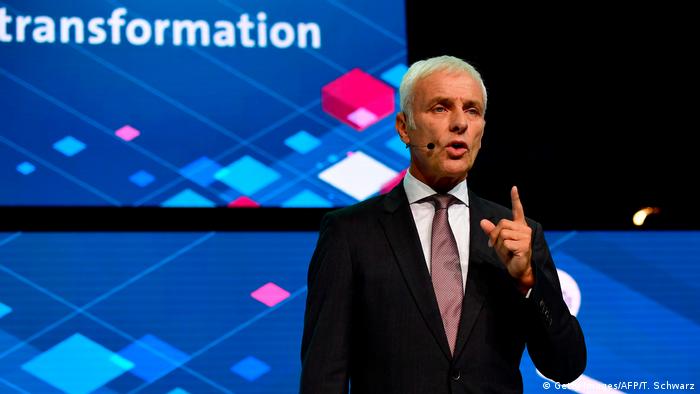 VW chief executive Matthias Müller has said that the German government should consider phasing out the subsidies that encourage Europeans to buy diesel cars.

"I'm convinced that we need to question the sense and purpose of these diesel subsidies," Müller told the German business daily Handelsblatt on Sunday, in remarks that represent a fundamental change of position by the company largely responsible for diesel's popularity in Europe.

"If the transition to environmentally friendly electric cars is to succeed, the diesel internal combustion engine cannot be subsidized like before." Müller said, referring to the lower taxes German drivers pay for diesel fuel compared with petrol. "The money could be more meaningfully invested in the promotion of environmentally friendly drive technologies," he added.

German car giants like Volkswagen, BMW and Daimler have championed diesel technology since the 1990s, hoping to meet tighter CO2 emissions targets with diesel engines that emit less of the climate changing gas than those running on petrol.

The carmakers were supported by the EU which allowed European governments to offer tax breaks on the fuel. Last year, diesel tax breaks in Germany amounted to some €7.8 billion ($9.2 billion), according to the country's federal environment agency (UBA).

Diesel cars were hugely popular until recently, but sales have been plummeting and political attitudes have changed accordingly in the wake of VW's Dieselgate scandal.

In 2015, VW admitted to widespread cheating on emissions tests, saying it had installed illegal software in around 11 million diesel cars worldwide to make cars appear to emit fewer harmful nitrogen oxides. The scandal drew attention to the health hazards of diesel exhaust.

In another break from his peers, Müller also said that he was in favor of banning older diesels from city centers. But he said such restrictions should not apply to newer diesels that meet stricter standards on nitrogen oxide emissions.

Müller's statement to Handelsblatt caused a minor sensation in Germany, with environmental activist group Greenpeace drawing the comparison of a fare dodger asking the ticket inspector to check peoples' tickets.

"The government is being urged to phase out diesel subsidies by none other than the biggest diesel fraudster," said Tobias Austrup, a transportation expert for Greenpeace.

Ferdinand Dudenhöffer, a professor at the University of Duisburg-Essen who has frequently been critical of Volkswagen, said that "if there was a Nobel Prize for company bosses, Müller would earn it."

However, the German Transport Ministry said Monday it was "very astonished" about the demand. And government spokesman Steffen Seibert told reporters in Berlin that the government "has no plans to change taxation of diesel fuel."

Müller stopped short of calling for a quick end to the subsidies, and he may have just been acknowledging reality. Until last year, more than half of all cars sold in Europe were diesels. On the other hand governments in France, the UK and the Netherlands have all recently announced plans to ban the sale of diesel and petrol cars between 2030 and 2040. Even the German city of Stuttgart, home to Daimler, Porsche and Bosch, is considering a ban.