Violence, arrests at gay rights rally in Moscow | Europe| News and current affairs from around the continent | DW | 28.05.2011

Police have arrested dozens at an unsanctioned gay rights rally in Moscow after violence broke out between activists and members of a religious group. Three prominent gay right leaders are among the detainees. 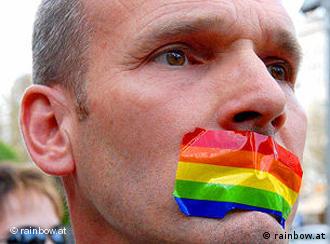 A banned gay rights rally in Moscow was marred by dozens of arrests on Saturday after violence broke out between activists and an ultra-Orthodox religious group.

Three prominent figures in the global gay rights movement were among those arrested as activists attempted to stage the rally near the Kremlin wall.

An eyewitness told the news agency AFP that protesters waving rainbow flags and carrying placards which read "Russia is not Iran" were attacked by members of the religious group who were waiting to meet them.

People in both groups were subsequently wrestled to the ground by police officers before being arrested and led to police vans.

Among the detainees was leading American gay rights activist Dan Choi, as well as Peter Tatchell from the UK and Louis-George Tin from France. 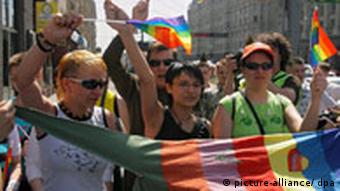 Members of the ultra-Orthodox group reportedly wore black robes and carried the Christian Orthodox Cross. Leonid Simonovich-Nikshich, a member of the group, told AFP that they went to the Kremlin with the specific intention of stopping the march.

"God burned down Sodom and Gomorrah and he will burn down Moscow too if we let things like this happen," he said.

Yury Luzhkov, the former mayor of Moscow who once likened gays to the devil, has banned gay pride parades for the last six years. This year was no exception and the ban remained in effect under the new Mayor, Sergej Sobjanin.

In the build-up to the event, police vowed to arrest anyone who took part in Saturday's rally.

During a state visit to Moscow earlier this week, Berlin's governing Mayor Klaus Wowereit described the ban as "discriminatory."

Some 120 Russian activists were arrested during the first attempt to hold a gay pride parade in 2006. In October, the European Court of Human Rights ordered Russia to pay one local activist damages because of the march ban.

A banned gay rights demonstration was broken up by Moscow police and at least a dozen protestors were arrested on the eve of the International Day of Anti-Homophobia. (16.05.2009)