While China is seeking to change the status quo in the South China Sea, the US is lifting its arms embargo against Vietnam, whose prime minister favors a solution to the dispute under international law. 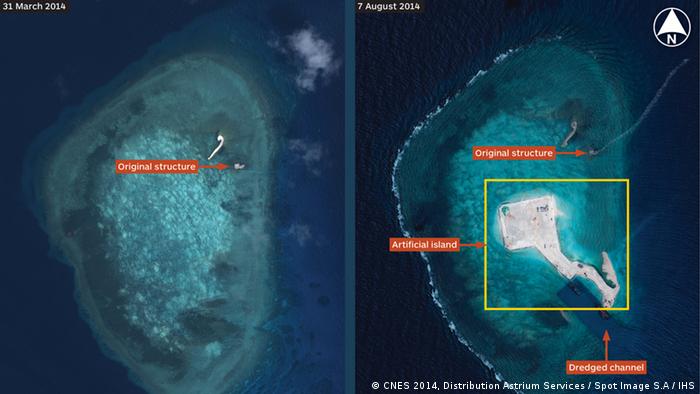 Despite the typhoon season, China is continuing to expand its interests in the South China Sea, with satellite images from Airbus Defence and Space showing the building of artificial islands on the Gaven Reefs. The two reefs are part of the disputed Spratly Islands and are located in the middle of the South China Sea between Vietnam and the Philippines.

There is now around 114,000 square meters of new land in the area, the military intelligence center IHS Jane's reported on October 30.

The new island is just a few miles north of another artificial island that China built in May at the Johnson Reef. "China is trying to change the status quo by creating new facts," said Carlyle Thayer, professor at the University of New South Wales in Australia and an expert on Vietnam.

"Beijing is building infrastructure to support fisheries as well as oil and gas exploration," Thayer told DW, adding that electronic sensors and radars have been installed on the islands to better monitor the region. 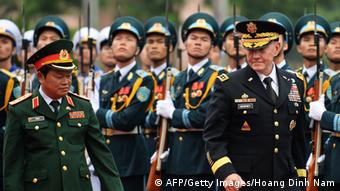 The platforms, however, are too small to serve as military bases, the analyst believes. "In any case, the presence of China's coast guard vessels is set to increase," he underlined.

In light of this development, other nations have started to make their move. The United States, for instance, partly lifted its arms embargo on Vietnam earlier this month, enabling the immediate delivery of defensive systems. Vietnam had been pushing the US to lift the embargo since 2009.

Thayer is of the view that the timing has to do with the fact that both nations' security interests in the South China Sea have recently converged, adding that the US is seeking to contain Chinese aggression in the region.

Ever more farmers in Vietnam's Mekong Delta are facing tough decisions as a result of saltwater intrusion in their rice fields. But some argue it's just nature undoing human changes to the land. (29.09.2014)

However, no initiative launched by any of China's neighbors thus far has succeeded in persuading Beijing to change tack. This is why Vietnam is banking on its military: "Now that Vietnam is enhancing its military, there is a bigger risk for China," said Thayer.

Meanwhile, Vietnam's Prime Minister Nguyen Tan Dung - on a visit to Europe until October 17 - emphasized in an exclusive DW interview as well as in a speech in Berlin the importance of finding a solution to the dispute in accordance with international law and the United Nations charter.

PM Dung told DW that Vietnamese foreign policy follows an irrevocable principle: "We don't build alliances with a country in order to fight another one." Dung apparently wants Vietnam to stay out of any potential conflict between China and the US, an understandable position given how much Vietnam suffered during the battles of the Cold War.

In his Berlin speech, the PM also stated that "no state alone, not even a superpower, is capable of dealing with the challenges of the conflict by itself." He also thanked the European Union; and especially Germany; for its support in seeking a peaceful solution in accordance with international law.

When asked whether Vietnam would support Manila's legal plea to the United Nations challenging Beijing's claims, the PM failed to give a straightforward answer. 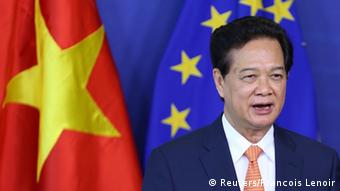 PM Nguyen Tan Dung: 'We don't build alliances with a country in order to fight another one'

The Philippines, which is also embroiled in a territorial dispute with China, is the only country thus far which has taken Beijing to the international tribunals such as the Hamburg-based International Tribunal for the Law of the Sea and the Permanent Court of Arbitration in The Hague. Beijing, however, has refused to take part in the proceedings. A ruling is not expected before 2016.

While Vietnam's premier said he personally believed the Philippines' move was "progressive and promising," he failed to talk about his country's stance on the issue.