Ever more farmers in Vietnam's Mekong Delta are facing tough decisions as a result of saltwater intrusion in their rice fields. But some argue it's just nature undoing human changes to the land. 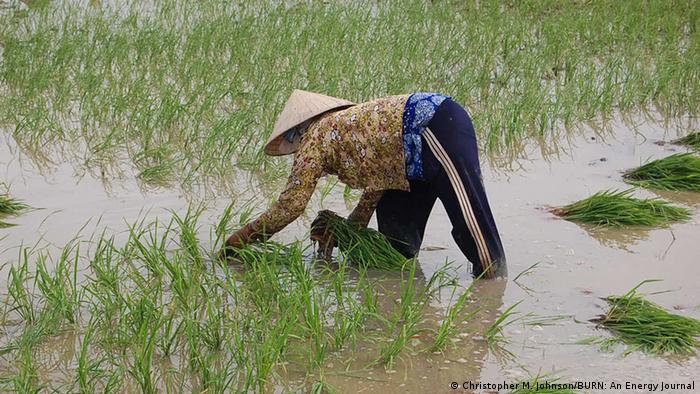 In southern Vietnam's Mekong Delta region, the sprawling rice fields are full of emerald green plants. Hai Thach stands on the monsoon-soaked footpath that runs between his paddies. Squinting out across his half-hectare plot, the rice farmer says this is where he loves to be. "I so much enjoy working this land. Everyday, I must visit the land, four or five times a day."

Thach was born here in Soc Trang province. His parents were rice farmers, as were his great grandparents.

He's spent his entire life with this crop, and talks about the crop like it's a family member: "When the rice gets sick, I’m sad," he says.

Thach's baseball cap barely hides the worry in his eyes as he reaches down into the sea of rice plants and snaps off a long leaf. The crop is supposed to be green. But lots of Thach's rice is starting to yellow. 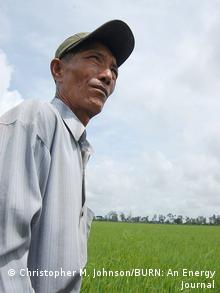 He says saltwater has gotten into his fields, where it creates an environment that allows bacteria to flourish. Saline intrusion is often deadly for delta rice crops, which rely on fresh water to thrive.

"I expect to lose some of the rice plants, to not be able to harvest them at all," Thach says, explaining that he could lose nearly $300 (230 euros) this season - close to half of what he takes home in a year.

Thach's story is similar that of more than nine million rice-growing households in Vietnam. His situation is becoming increasingly common throughout the Mekong River Delta, a region that stretches for 39,000 square kilometers (about 15,000 square miles). Farmers there are finding themselves caught up in massive climate change-triggered chain reaction.

Rising seas are inundating low-lying regions around the world - flooding towns and cities, and threatening regions vital to the world's food supplies, including the Mekong Delta, commonly referred to as Vietnam's rice bowl.

Each year, the Mekong Delta grows close to all of Vietnam's 28 million tons of rice, and nearly half of the 7 million tons the country exports. Vietnam is one of the world's top three rice suppliers, which earned the country almost $3 billion (2.3 billion euros) last year.

But Vietnamese agriculture officials predict this could be a bad year for the nation's rice output, which might drop by as much as 40 percent due to saline intrusion.

Tens of thousands of hectares have already been damaged by salt water - an especially dismal sum for Soc Trang," one of the poorest provinces in the Mekong Delta," says Tim Gorman, a doctoral student researching the social and economic consequences of climate change in the region. 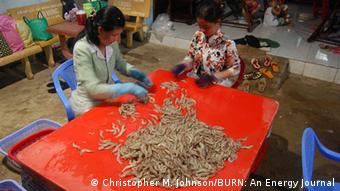 One of Soc Trang's biggest problems is its location. The whole area is veined by channels of the Mekong River, including one of its larger distributaries, the Bassac River, which runs across the province's northeastern border.

The Bassac empties into the South China Sea, which meets the southeastern edge of the province. These two large bodies of water make this part of the delta ripe for saline intrusion.

"There's more and more salt water pushing up little streams and distributaries," Gorman says, "and also up the main channels of the Mekong River. At times - during the dry season, in the winter and spring - it penetrates for dozens of miles inland."

Climate change is altering the fluid dynamics of the region. The dry seasons - which come during the first few months of each year - have been getting dryer. Less rainfall has meant less fresh water to fill the region's river and stream beds. As ocean levels rise this leaves more room for salt water to push up into the delta.

The saline intrusion wrecks what farmers in the region often call the “third crop” - a rice crop that's grown during the dry season. During these months, fresh water for the rice fields typically gets pumped in from waterways outside of the area. But with less fresh water around, that is getting harder to do.

In 2012, seawater went so far inland that there was little fresh water to be found. Rice farmer Hai Thach remembers that he and his neighbors had fields full of green rice plants, and no salt-free water to feed them. "If we used no water, the rice would die," Thach says, describing the farmers' impossible circumstances.

"We had to use salty water, and the rice died. We just needed 30 more days, and we would have harvested. But it all died." 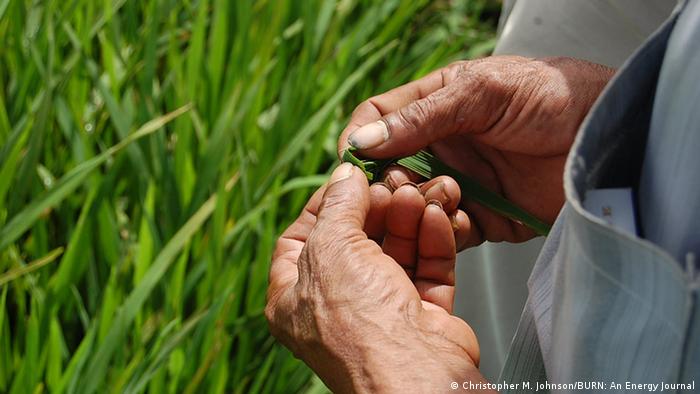 Some of the farmers' troubles are certainly due to climate change, especially rising sea levels. But another problem is that much of the Mekong River Delta only became rice-friendly fairly recently.

Walking along a muddy foot between two massive rice paddies, Tim Gorman explains that, "100 years ago we would have been standing in the middle of tidal swamp."

It used to be that ocean water would naturally fill this region of the Delta for some part of the year. Only over the last half-century has this part of the Mekong River Delta become an intensive rice-growing area.

The French colonial authority began building canals and clearing mangrove forests here, opening up the land for increased rice agriculture. Americans followed after the 1940s, starting major irrigation projects that the Vietnamese government resumed after its war with the US ended in the mid 1970s.

Faced with a national food crisis, the communist government was eager to rapidly expand the nation's rice growing capacity. Canals, dikes and gates across the delta were built or fortified, pushing back the ocean and channeling in fresh water - effectively converting almost the entire area into a massive rice growing region. Today, the Vietnamese government proscribes nearly four million hectares of land nationwide solely for rice cultivation.

'Undoing what man has built'

In the Mekong Delta, many of those coastal plantations are facing an expanding ocean that is starting to overwhelm irrigation structures. Old, decaying gates and dikes are being met with far more water pressure than they were built to manage.

In some ways, Gorman says, saline intrusion is nature - with the help of a warming planet - undoing what man has built. The climate change part of this dynamic, according to Gorman, "is that the infrastructure designed to protect (the area) from direct saline intrusion - from the ocean itself - is increasingly insufficient because the tides are simply higher. You're looking at sea levels that are already 20-30cm above what they were a couple of decades earlier." 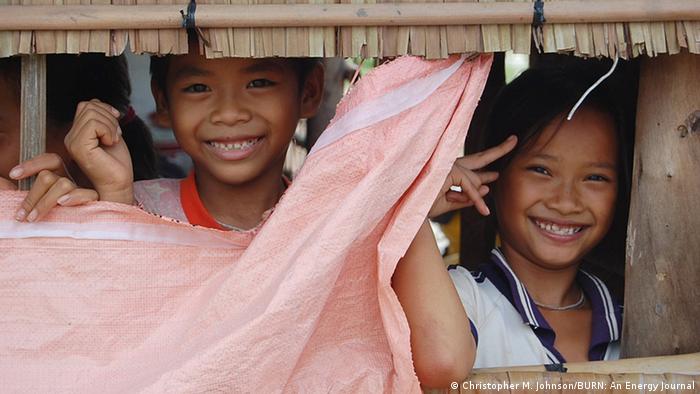 In order to avoid sweeping crop failure, the government issues warnings to farmers on whether or not they should attempt a crop for the coming season.

The state has also tried to help in other ways, such as introducing salinity-resistant rice varieties; building and restoring dikes and seawalls; and supporting the formation of cooperatives, which give farmers access to much-needed credit.

But as rice consumption in Vietnam drops off, and the country enjoys a rice surplus, the agriculture ministry is considering major shifts from rice to corn cultivation - producing food not just for its citizens, but for the nation's growing livestock sector.

These figures are far smaller than those the rice sector boasts. But the shrimp industry - both in revenue and exports - is expanding rapidly. In Soc Trang, those with even small operations report earning more than five times what rice growers like Hai Thach bring home in a year.

But the shrimp business has its problems. Startup costs are prohibitively high. Losses can be devastating. And chemical and waste run-off from shrimp farms creates significant environmental challenges. 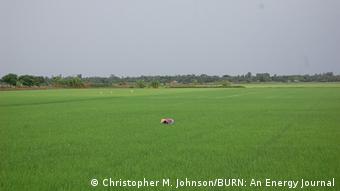 The Mekong Delta region produces nearly half of Vietnam's rice

Meanwhile, some farmers have opted to leave the farm life behind altogether, migrating to nearby cities like Can Tho, or further up to Ho Chi Minh City. Rice farmer Hai Thach says some of his neighbors have gone, as have most of his own children.

But Thach's options are limited. He doesn't have the capital or skill to grow shrimp. Moving isn't an option, either. "I'm too old to leave here," he says, "and my land is here. I will stay here to work on my land, and let the young generation leave."

Christopher Johnson compiled this article with support from Sound Vision Productions and the Alfred P.Sloan Foundation.

Nature's budget has already expired for the year. DW talks to World Wildlife Federation's Jörg-Andreas Krüger about the increase in global consumption of the planet's natural resources. (19.08.2014)

Highway to Everest: infrastructure at the expense of nature?

The Nepalese government plans to build the first road leading to the Everest region. While this would boost the tourism industry, experts are concerned that the country’s natural heritage could suffer. (13.08.2014)