Vietnam singer Mai Khoi adds a youthful tone to aged politics | Asia | An in-depth look at news from across the continent | DW | 06.07.2017

The Vietnamese singer and activist Mai Khoi is an outspoken advocate for human rights and freedom of expression in Vietnam. After her performance at the Global Media Forum she spoke with DW about her political activism. 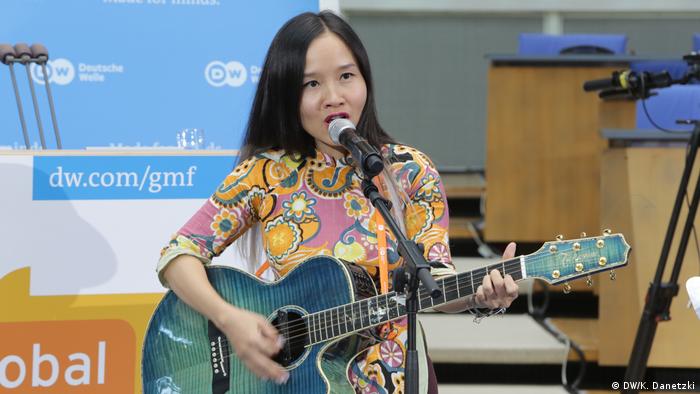 Vietnam is a young and dynamic country. Out of Vietnam's total population of around 90 million, 40 percent are 24 years old or younger. The economy is growing quickly and in the metropolises of Ho Chi Minh City and Hanoi, skyscrapers are shooting up out of the ground.

But politics in Vietnam isn't as young and dynamic. The Vietnamese Communist Party (CPV) has been in power longer than any other communist party in the world. The CPV does not tolerate any political forces alongside it. Elder party members have warned for a long time that a "peaceful evolution" to a more pluralistic system could undercut the CPV's monopoly on power.

During National Assembly elections in May 2016, Vietnamese singer-songwriter Mai Khoi stirred up controversy by announcing she would run as a candidate. She was unsuccessful, but her action ignited a debate over political participation in Vietnam. That same month, then-US President Obama travelled to Hanoi and met with the singer and other political activists. And her candidacy was not the first time that Mai Khoi stood up for democracy, human rights and countering violence against women.

Right now, Mai Khoi is working on a new album and her music is connecting to an influential and rich tradition of political songs.

DW invited the signer and activist to speak at the 2017 Global Media Forum and provide musical accompaniment to the Freedom of Speech award. The prize has been given out since 2015 to people or institutions that have made outstanding or unique contributions to human rights and freedom of speech.

DW: When and how did you begin to develop an interest in politics?

Mai Khoi: I really began to develop an interest in politics after I was encouraged by friends to run as an independent candidate for the National Assembly. That was in February 2016 and for me it started there.

I had already been involved with different social projects, and at the time, I found many things with politics and the political system to be problematic. This sense has become stronger since my candidacy. Since that experience, I see much clearer how many barriers there are in Vietnam. I also met many people who share similar feelings.

How can you explain why Vietnamese - especially youth- are not interested in poltics?

In my view, this has a lot to do with the educational system in Vietnam. This narrow system leads people to fear coming in contact with politics. They think that this is the job only of the state system and the government - it has nothing to do with them and they shouldn't speak about it.

They are also afraid of endangering themselves. This is especially true for young people who don't have the courage to ask political questions. Unfortunately, this also means that they don't think about many social and civic issues.

What can be done to get more people interested in politics?

Foremost, it is important to attract people to political issues - young, old and across all social groups. Every decision in our lives is influenced by politics. Whether we can get divorced, what schools our children will attend, if we have green spaces in our cities.

All of these are important questions and we can all contribute to them. With my candidacy, I wanted to demonstrate that everyone should have the right to be politically active and help shape policy. It is ultimately about our lives.

Politics doesn't have to be difficult or complicated. We have to inspire people - especially youth. Everyone should feel that they can accomplish something, that they are a part of a society and a nation and that they can help improve living standards. We must demonstrate to young people that this is important.

What do you want for the future?

I want there to be place given for independent candidates at the next National Assembly - especially for young people. It would only be a small change, but this is how we could reach something step by step and soften the government. We have to also insist that freedom of speech and of assembly finally achieve a place in Vietnam.

Human rights organizations like HRW and AI frequently report about activists and bloggers being attacked in Vietnam and put under pressure. Are you afraid of this?

As an activist in Vietnam, you need to have a sense about what is okay at certain times and what isn’t. But that is not simple. In Vietnam there is no legal certainty and you don’t know if you have crossed a "red line."

Right now an example of a sensitive topic is the Taiwan-owned steel factory. (ed: The factory pumped highly toxic water into the sea and poisoned fish). Or the conflict with China over the South China Sea. With these issues, there is a danger that you may be arrested.

Nevertheless, we must continue to fight for human rights and freedom of opinion. But when we talk about problems or write blogs, we must - just like in Hanoi traffic - wind our way thorough with skill. This is the only way we can reach people.

This interview was conducted by Rodion Ebbighausen