At least four people have been killed and 15 wounded in a series of shootings in Austria's capital. The Interior Ministry said the attack was carried out by at least one "Islamist terrorist." 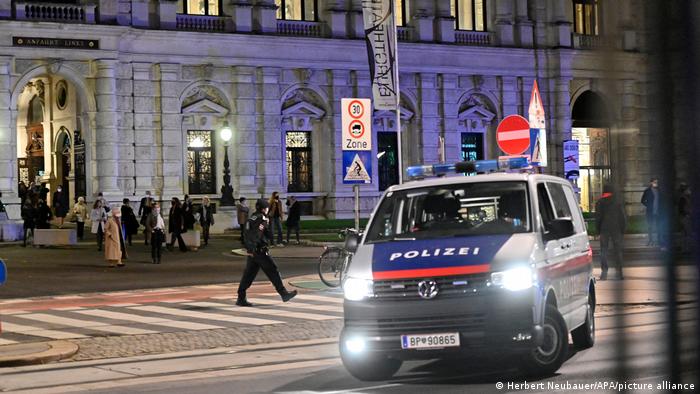 A terror attack in Vienna that left four people dead was carried out by at least one Islamic terrrorist, Austria's Interior Ministry said Tuesday.

"We experienced an attack yesterday evening from at least one Islamist terrorist, a situation that we have not had to live through in Austria for decades" he said, adding that authorities could not rule out that there were more perpetrators.

The assailant killed by police was armed with an assault rifle and was wearing a fake explosives belt.

Some 1,000 police officers have been deployed across Vienna in the wake of the shootings, which began late Monday outside the city's main synagogue. Police said there were "suspects armed with rifles in six different locations" across the city.

Two men and two women died in the attack, while at least 15 people — including a police officer — were wounded.

"This is the hardest day Austria has seen for many years," Nehammer, as he urged citizens to stay indoors. He also said children would not be required to attend school on Tuesday.

Austrian Chancellor Sebastian Kurz said the shootings were a terror attack, adding that the army would protect sites in the capital so the police could focus on anti-terror operations.

"We are currently experiencing difficult hours in our republic. I would like to thank all the emergency forces who are risking their lives for our safety, especially today. Our police will take decisive action against the perpetrators of this repulsive terrorist attack," Kurz said on Twitter.

The chancellor will hold a special meeting with his cabinet via video conference on Tuesday at 9 am (08:00 UTC). He will then address the nation at 10 am, news agency APA reported.

Authorities urged the general public to refrain from posting videos or photos on the internet, saying they posed a danger both to police and civilians.

Attackers chased people 'all over the street'

The head of Austria's Jewish community, Oskar Deutsch, said on Twitter that it was not clear whether the city's synagogue had been the target of the shots fired, but that it and adjoining offices were closed at the time.

"Upon hearing some shots downstairs, I looked down the window and I saw the attacker running into various bars and restaurants…and people running away," said Rabbi Schlomo Hofmeister, an eyewitness to the attack.

"There were one or two attackers chasing them all over the street," he said. 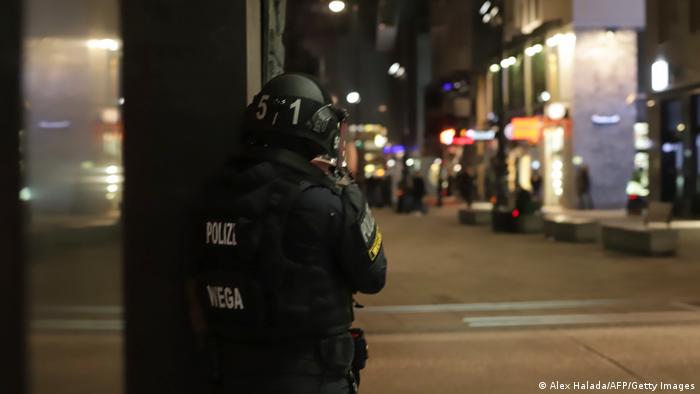 Multiple gunshots were fired in up to six locations across the Austrian capital, police said

"People were sitting outside (the restaurants) and (the attackers) were shooting at the people," Hofmeister said. "They were shooting at least a hundred rounds just in front of our building."

DW's Steve Chaid, reporting from Vienna, said: "There's a massive security cordon around the district. Police are warning that the assailants are still on the run. So the manhunt involves a much larger area. Pretty much everybody is being told to stay home."

The shooting "coincides with Austria going into a planned coronavirus lockdown at midnight, so lots of people were out," he said.

French President Emmanuel Macron tweeted in response to the attack: "We share the shock and sadness of the Austrians after an attack in Vienna. This is our Europe. Our enemies need to know who they are dealing with. We won't give in to anything."

European Commission President Ursula von der Leyen joined Macron in expressing solidarity with the people of Austria. "I am shocked and saddened by the brutal attack that took place in Vienna. My thoughts are with the families of the victims and the Austrian people. Europe stands in full solidarity with Austria. We are stronger than hatred and terror."

The German Foreign Ministry also took to Twitter to express dismay at what was unfolding in Vienna. "Terrifying, disturbing reports reach us this evening. Even if the extent of the terror is not yet known, our thoughts are with the injured and victims in these difficult hours. We must not give way to the hatred that is intended to divide our societies."

Italian Prime Minister Giuseppe Conte condemned the attack, writing on Twitter that there is "no place for hate and violence in our common European house."

"We are following with very great concern the terrible news coming from Vienna," Foreign Minister Luigi Di Maio added. "A vile attack which we strongly condemn. Italy is close to the Austrian people. Europe must respond."

The office of UN Secretary-General Antonio Guterres released a statement following the events of Monday night. It said: "The Secretary-General is following with utmost concern the still-evolving situation in Vienna's city center where violent attacks in several places have been reported today."

"The Secretary-General strongly condemns these attacks and reaffirms the solidarity of the United Nations with the people and the government of Austria."

Czech police said they had started "carrying out random checks of vehicles and passengers on border crossings with Austria as a preventive measure in relation to the terror attack in Vienna."

Police added they had stepped up "supervision over major Jewish facilities in the Czech Republic" in a preventive measure that "reflects developments not only in neighboring Austria."

Police have said the man, who allegedly killed two people and injured five others in a Halloween rampage, was not part of a terrorist group. The suspect was dressed in medieval clothes and brandished a Japanese sword.