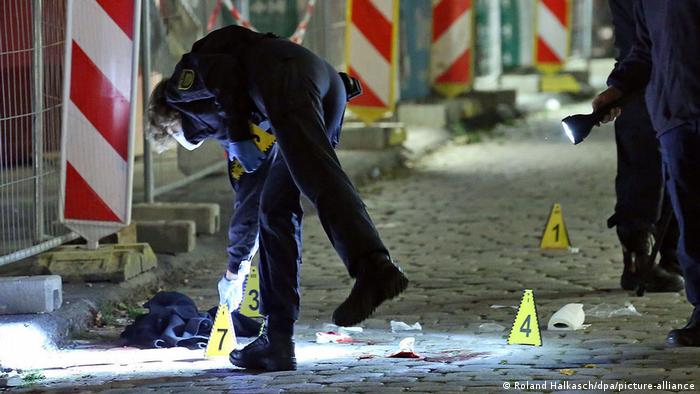 A 20-year-old Syrian who stabbed one person to death and wounded another in Dresden was likely motivated by Islamic extremism, German prosecutors said on Wednesday.

The man was arrested on Tuesday evening, police and prosecutors in the eastern German city said. They said the suspect came to authorities' attention as a result of examining evidence at the crime scene.

"Investigations have shown that the dreadful killing in Dresden had an Islamist background," Justice Minister Christine Lambrecht said. "Islamist terror is a major, enduring threat to our society that we have to tackle determinedly."

According to the Bild newspaper, that evidence was DNA traces found on the attack weapon, which police discovered not far from the scene of the October 4 crime. The paper said the suspect's DNA was already recorded in police databases and cited a prosecutor as saying that the man already had a police record.

The authorities said the suspect had an extensive criminal record, including charges of soliciting support for a foreign terrorist organization, and charges of bodily injury, and making threats.

"Utmost vigilance is necessary, whatever the form of extremism and terrorism."

The alleged attacker came to Germany in 2015 and applied for asylum, according to Der Spiegel magazine. Even though his application was rejected, he has managed to stay in Germany under the so-called "tolerated" status which German authorities give to rejected asylum seekers who cannot be deported.

The two victims, both from the western state of North Rhine-Westphalia, were visiting Dresden together. One 55-year-old man died of his injuries in hospital, while a 53-year-old survived despite having been badly wounded.