Delcy Rodriguez, foreign minister and head of Maduro's Constituent Assembly is to serve as the president's number two. Rodriguez will be the second woman ever to to hold the post. 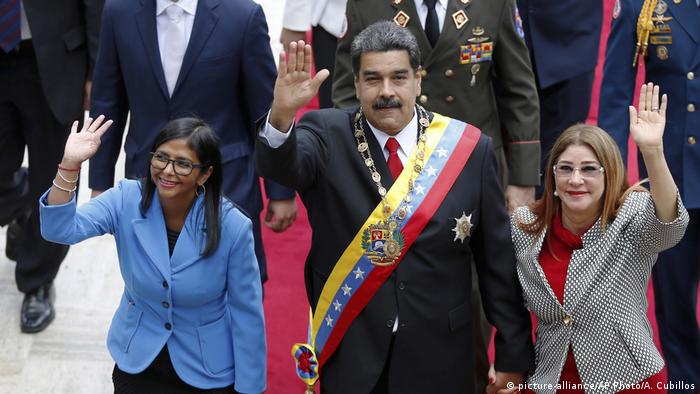 Maduro said that "the epic victory of the people on May 20," as he called his re-election, forced him to make changes to the structure of his government. The president said it was time for "a new beginning."

Maduro, whose re-election was widely condemned by the international community and the Venezuelan opposition, has chosen a more conciliatory tone since he extended his mandate.

Among the concessions, the government has agreed to release political prisoners and has offered a dialogue with the opposition.

The cabinet reorganization did not see many new faces, but mostly represented a reshuffling of the president's inner circle.

Venezuela's current vice president, Tareck El Aissami will move on to lead a new department, the Ministry of Industry and National Production, where he will become Maduro's top economic policy advisor.

Maduro announced Rodriguez's promotion on Twitter, calling her a "sister" and "brave young woman" who has been "tested in a thousand battles." Maduro said that Rodriguez would be tasked with overseeing "national dialogue, reconciliation, and peace."

Under Venezuela's constitution, the vice president role is largely subordinate to the president. But the role also leaves Delcy Rodriguez as potential successor, in the event that the president resigns or becomes incapacitated.

Rodriguez will become the second woman to hold the vice presidential post in Venezuela.

A lawyer by profession, Rodriguez's rise has taken place mainly in Maduro's government, as she has proved to be a loyal presidential ally.

Prior to the vice-presidential appointment, Rodriguez had been at the head of the all-powerful, pro-Maduro Constituent Assembly, which was established in 2017. She also served as the country's foreign minister and communications minister, and led the campaign efforts to promote Maduro's re-election.

As Rodriguez departs from her leadership role at the assembly, the body will convene next week to choose a replacement.

The newly-appointed vice president thanked Maduro for the new post and lauded the governing party, saying that her colleagues were "real revolutionaries, inspired by vast feelings of love toward the homeland."

The South American country is spiraling further into a humanitarian disaster spurred by the government's economic policies, which have caused inflation to skyrocket 24,571 percent in the past 12 months. (12.06.2018)