Leopoldo Lopez had been confined in Venezuela for more than six years. It isn't clear how he escaped from the Spanish ambassador's residence in capital city Caracas to join family in Madrid. 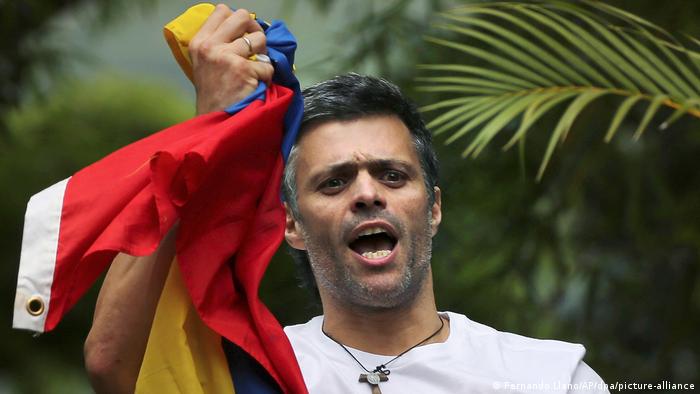 It was announced Saturday that Lopez left the Spanish ambassador's residence in Venezuela's capital city Caracas. He had been holed up in the residence for over a year, avoiding house arrest for his role in anti-government protests.

In a statement, the Spanish foreign ministry said Lopez's decision to leave the Spanish embassy in Venezuela was "personal and voluntary."

Lopez, who founded the social-democratic Popular Will Party, in a series of tweets earlier said he had left Venezuela but did not disclose his location.

"Venezuelans, this decision has not been easy, but rest assured that you can count on this servant to fight from anywhere," Lopez said. "We will not rest and we will continue working day and night to achieve the freedom that all Venezuelans deserve."

Lopez was jailed in 2014 for leading violent protests against embattled President Nicolas Maduro and was released to house arrest in 2017.

In April 2019, Lopez backed Guaido's attempt at a military revolt against Maduro. After the uprising fizzled out, he sought shelter at the Spanish ambassador's residence.

Lopez's wife, Lilian Tintori, fled to Spain that May.

How did Lopez escape?

There are various reports from sources about how Lopez evaded a heavy security presence and fled Venezuela. Two people familiar with the matter said he traveled via Colombia.

In a message directed to Maduro on Twitter, Guaido said his political mentor had gotten out of Venezuela by "evading your repressive apparatus."

"The head of the Spanish diplomatic mission in Venezuela served as the main organizer and confessed accomplice of the... escape from Venezuelan territory of the criminal Leopoldo Lopez," President Nicolas Maduro's government said in a statement.

Following Lopez's departure, intelligence agents arrested four Venezuelans who worked with Lopez in Caracas, including two of his bodyguards, according to Ana Leonor Acosta, a local lawyer who said she was contracted to defend the four individuals.