Venezuela: Nicolas Maduro halts talks with opposition over US sanctions

Venezuela responded to President Donald Trump's move to freeze assets in the US by skipping talks with Juan Guaido's team in Barbados. The government accused Guaido of 'celebrating and promoting' so-called US aggression. 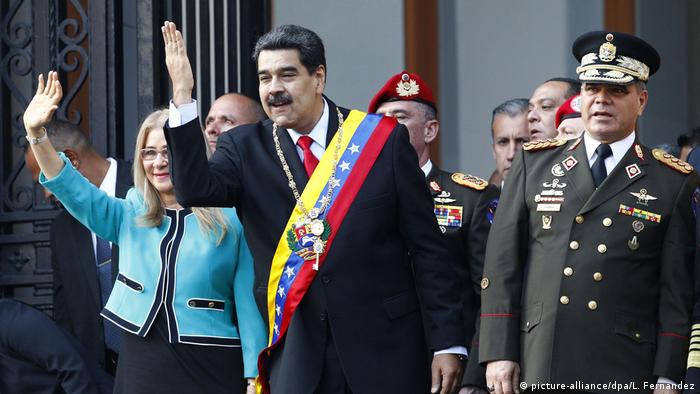 Venezuela's information ministry said on Wednesday that the government would not attend a planned round of talks, brokered by Norway, with the opposition in Barbados this week.

The move came in response to Washington's decision to freeze all assets held by Venezuela's government in the US and blocking US citizens from conducting business with Maduro's government.

"President Nicolas Maduro has decided to not send the Venezuelan delegation on this occasion, due to the serious and brutal aggression, perpetrated continuously and cunningly, by the Trump administration against Venezuela,” the statement read.

"Venezuelans have noted how the leader of the opposition delegation, Juan Guaido, has celebrated and promoted these actions that are harmful to national sovereignty," the statement read.

Guaido, whose interim presidency has been recognized by more than 50 countries, told supporters at a rally on Wednesday that the sanctions were "penalties for those who steal and profit from misery."

But Maduro's government stopped short of ditching the talks altogether, noting that it would "review the mechanisms of this process to ensure its continuation is truly effective and harmonious with the interests of the people."

Opposition leaders reacted to Maduro's withdrawal from the talks with a mix of disbelief and told-you-so admonishments.

"They've been saying for days they believe in peace and the Oslo mechanism, but at the first sign of change they fear the possibility of a real political change in the country," lawmaker Stalin Gonzalez, head of Guaido's negotiating team in Barbados.

This week's talks were the sixth round of meetings, which began in May with the goal of finding a solution to the country's prolonged political standoff.

But the main disagreement lies in whether or not to hold new elections, which the opposition is demanding and Maduro's government has refused.

The Trump administration has accused Maduro of using the talks to buy time. "We will not fall for these old tricks of a tired dictator," US national security adviser John Bolton said in a regional meeting in Peru on Tuesday.

Maduro has been weakened by the US sanctions and finds himself increasingly isolated internationally, but he still has the backing of powerful allies like Russia and China.

Despite Guaido's efforts to mobilize the population against Maduro, Venezuela's military continues to support the embattled president.

National Security Adviser John Bolton said Venezuela was now part of an "exclusive club of rogue states," and issued a stark warning to any countries wanting to do business with Caracas. (07.08.2019)

Caracas and other parts of Venezuela have been hit by a massive power cut. The government blamed the blackout on an "electromagnetic attack." (23.07.2019)