Vaccine skepticism and conspiracy theories drive up Pakistan′s polio rates | Asia | An in-depth look at news from across the continent | DW | 08.06.2022 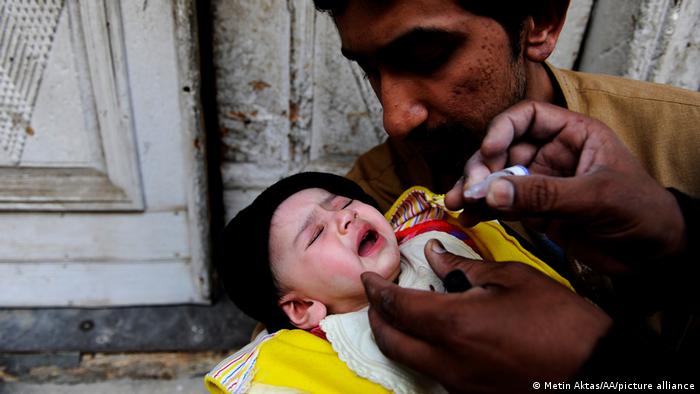 Pakistan's polio eradication campaign is in disarray, as a high number of cases emerge in the northwestern tribal district of North Waziristan.

A total of eight polio cases were recorded in the span of just one month, raising concerns that the disease could be on the rise again in the South Asian country of 220 million. The most recent case of child paralysis as a result of polio in Pakistan was reported in January 2021.

Experts say that vaccine skepticism is one of the biggest contributors to the spread of the illness, as people increasingly use fake vaccination markings.

"The outbreak in North Waziristan appears to be following the same pattern as that witnessed in 2014 and 2019, when there was a surge in cases in the same area. We are working tirelessly to ensure that we break this pattern," Federal Health Minister Abdul Qadir Patel told DW.

"Over 99% of the world is now polio-free. Our children also deserve a life free from this incurable disease," Patel added.

The disease, which mainly affects children under the age of five, can infect the spinal cord, causing paralysis.

"Fake markings and refusals absolutely are two factors in the recent jump in the cases. The polio inoculation teams conspire with parents to miss the vaccination of the children," an official with the Pakistan Polio Eradication Program told DW, on the condition of anonymity.

When polio vaccine administrators go through communities vaccinating children, they mark a finger of children to show they've been vaccinated. However, parents who are opposed to the vaccine have been falsely marking their children's fingers to skip the jab.

Shazia Batool: Woman with polio uses art to empower others

The government has launched an investigation into the recent outbreak in North Waziristan — formerly a stronghold of the Taliban in the country's northwest, bordering Afghanistan.

"The new cases are really dangerous, primarily when we were heading towards a polio-free country. I fear more cases will emerge in the future," Dr. Qaiser Sajjad, secretary-general of the Pakistan Medical Association, told DW.

"The program will terminate the staff involved in producing the fake markings," said Sajjad.

Conspiracy theories are also a problem. Some skeptics, like Hajira Wazir, for instance wrongly believe the polio vaccine is a practice used by Western countries to sterilize Muslim children. "The West is using the vaccine as a cover … and our government is supporting their agenda," the 27-year-old mother of three from North Waziristan told DW.

It is also illegal to provide fake information and data to government vaccination teams.

"People involved in fake information are never prosecuted or fined. That is why many vaccine skeptics feel they can get away with not vaccinating their toddlers," Osama Malik, a senior legal expert, told DW.

"If the government is serious about making Pakistan a polio-free country, then they should hunt down and introduce strict punishments for those faking data ," said Malik.

Polio still remains an imminent global threat as long as a single case exists, as the virus can spread into polio-free countries and affect the population.

A significant portion of the Pakistani population opposed the polio vaccination drives and polio workers teams often came under attack across Pakistan, where vaccinations are widely seen with suspicion.

Some Islamists claim that the polio vaccination is being used by the West as a cover for spying on Muslims and allege these drives are suspicious, referring to the imprisoned Pakistani doctor Shakeel Afridi who allegedly helped Americans in their hunt of Al Qaeda's chief Osama bin Laden. Bin Laden was killed in an operation by the US special forces at his hideout in Abbottabad in May, 2011.

"The anti-vax myths should be broken by convincing masses through targeted campaigns about the seriousness of this disease through media awareness, clerics and impact of polio via real life story telling," said Sajjad.

For the past 25 years, Pakistan has carried out a countrywide polio vaccination drive through door-to-door campaigns to inoculate children. The teams are mostly made up of women health workers escorted by security guards.

In total, Islamist militant groups in Pakistan have killed more than 100 health care workers and their security guards since 2012.

Legal expert Malik added that "federal and provincial governments have made very little attempt to apprehend and convict the killers."

One of two countries to carry the disease

For decades polio remained the most feared disease in the world and was leading to millions of disabilities. According to the WHO,  Pakistan is among one of the only two countries, along with neighboring Afghanistan, still suffering from the crippling polio virus.

Anti-vaccination beliefs in Pakistan are so widespread that a husband divorced his wife for vaccinating their children against polio. In April 2019, more than 25,000 children were rushed to the hospital as a result of panic after the spread of unfounded rumors that a polio vaccine was leading to fainting and vomiting.

"These cases are happening in the same part of the country but parents and caregivers around Pakistan must remain extremely vigilant and give their children repeated doses of the polio vaccine," said Patel.