Two US Marshals were shot and injured as they attempted to arrest a suspect in the shooting of a policeman in Massachussetts. The 35-year-old man was also wanted on narcotics charges in another US state. 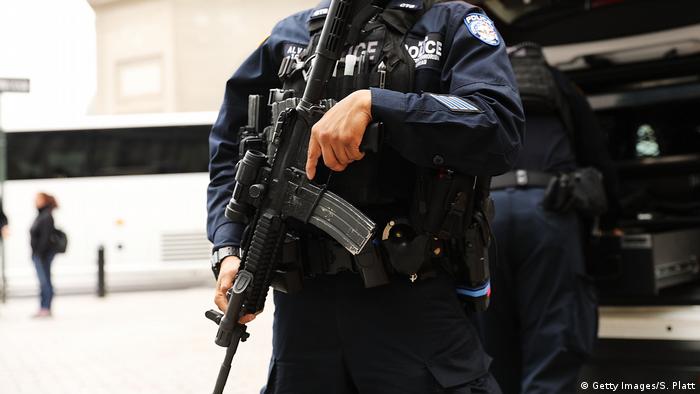 Two US Marshals and a suspect have been shot in the New York City borough of the Bronx early Friday, police said. The 35-year-old suspect was killed in the incident.

The New York Police Department said the shootout took place around 5:30 a.m. Friday local time. Two of three Marshals who entered the suspects home suffered gunshot woulds and were hospitaliyed, but are currently in stable condition, the department said.

Authorities had sought the suspect for shooting  a 28-year-old trooper during a late-night traffic stop in Hyannis, Cape Cod Massachussetts.

The trooper survived the shooting and was hospitalized, after a round went through his right hand and appeared to have struck his ballistic vest.

The suspect, whom The New York Times reported was a native from Jamaica, already had two more warrants in Massachusetts on charges including identity fraud and assault and battery on a police officer.

He was also wanted on narcotics and identity theft charges in the western state of Wyoming, according to police in Massachusetts.

The shooting death of a Black man has unleashed two days of looting and violence in the east coast city. Officials said they have ordered an overnight curfew to stop "lawlessness."

US: Police officer charged over Breonna Taylor raid — but not for her death

One officer was charged over the botched raid that led to the killing of a Black woman in Kentucky — but the grand jury brought no charges directly related to her death. Protests turned violent, with two officers shot.

Man killed in Portland after Trump supporters and opponents clash

The man was shot dead after a caravan with thousands of pro-Trump supporters left the city. Police have not released details about the victim's identity or comment on the motive behind the shooting.