The United States threatened to withhold information on terrorist attacks in Germany if Berlin offered asylum to Edward Snowden, according to Glenn Greenwald. The White House has denied the accusation. 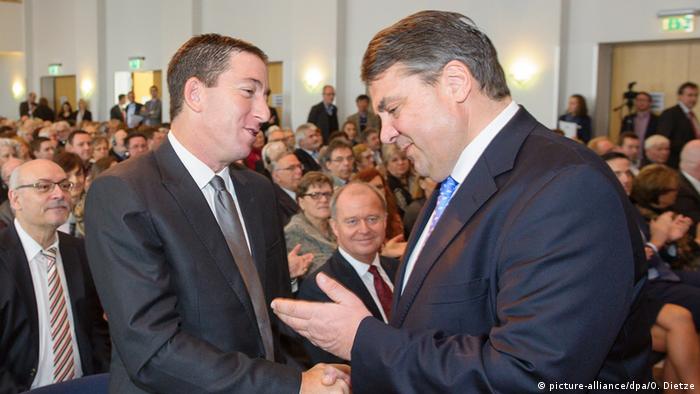 Star journalist and part of the team that brought the revelations of former US National Security Agency contractor Edward Snowden to the world, the Brazilian-based American writer Glenn Greenwald received the Siebenpfeiffer Prize for journalism in Germany last week. Both Greenwald and Snowden were praised by Vice Chancellor Sigmar Gabriel, who allegedly shared a revelation of his own with the journalist on the sidelines of the event.

According to Greenwald's report in The Intercept, an online publication he could-founded, Gabriel explained the reason Snowden wouldn't be receiving asylum in Germany.

"They told us they would stop notifying us of plots and other intelligence matters," Gabriel, who is also minister of economic affairs and energy as well as the head of the Social Democratic Party, is quoted as saying in the article.

When Gabriel was giving a talk at the presentation of Greenwald's award, he lauded the journalists who had helped bring Snowden's story to life and bemoaned that the whistleblower's is currently in "Vladimir Putin's autocratic Russia." This prompted an audience member to ask why Snowden wasn't brought to Germany, to which Gabriel replied that Germany would be bound to extradite him.

Obama, Gabriel, distance themselves from allegations

Gabriel's office would not comment on Greenwald's report, telling the German daily Frankfurter Allgemeine Zeitung that was no legal basis for offering Snowden asylum in Germany.

The Obama administration has denied the accusation of threatening to withhold information from Berlin, according to Washington newspaper The Hill, which quotes a statement from a senior official calling the suggestion that the US threatened to withhold intelligence "baseless."

Snowden shocked the world in June 2013 when he revealed secret NSA documents, which he has access to during his time as a security contractor, to Greenwald and documentary filmmaker Laura Poitras. The documents showed the incredible reach of the US spy agency, often into the private lives of American citizens and in allied countries.

He was stranded in Russia, where he was granted temporary asylum, while trying to reach Ecuador, as the Ecuadorian government has allowed him refuge. He is wanted in the United States on espionage charges that carry lengthy prison sentences.

Snowden recently appeared via video stream at the world's largest tech fair, CeBit, in Hanover to warn the public that their data is not safe.