'You are under attack,' Snowden tells CeBIT-goers

Two years after Snowden's revelations, security has become a big issue in the tech industry. But more needs to be done, he stressed in a live interview at the world's largest tech fair. DW's Paul-Christian Britz reports. 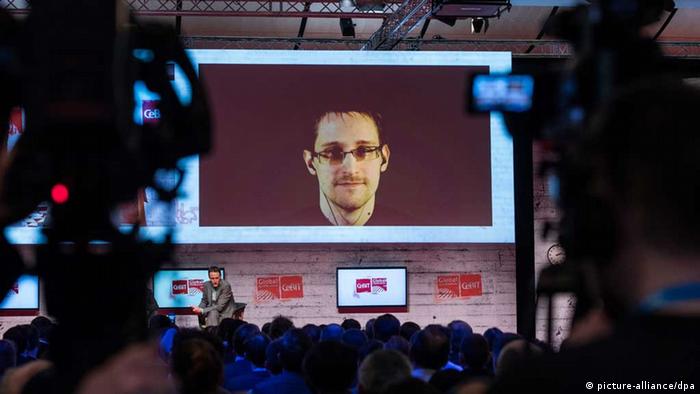 When Edward Snowden wants to speak at the world's largest technology fair in Germany about security, he can't just walk in. His own lack of security goes to show how fragile the concept is. Snowden has found temporary security from the US government in Russia, and he gives his interview with Intercept reporter Glenn Greenwald and Deutsche Welle anchor Brent Goff via an Internet live stream. From a small room somewhere in Russia, covered in black drapes so as not to reveal any background, the whistleblower waves into the camera.

In Hanover, people have come early to secure a seat in the large conference room before he appears. Many are left standing, and a few raise their cell phones to take pictures.

Nearly two years after Snowden's first revelations, security is a ubiquitous issue at the fair. CeBIT 2015 is about building a world where everything is connected. Conversations are dominated by buzz words like big data, mobile and cloud computing, and the concepts of interconnected production, or "Industry 4.0."

But these developments have opened the gates for all kinds of security breaches. Internet security businesses are picking up and, here, they occupy more than an entire exhibition hall. Many of the startups at the fair are developing new security systems, famous hacker Kevin Mitnick is a guest, and data-related services never fail to mention the security of their products in any of the conversations.

A recently published study by KPMG shows that security awareness has risen among German businesses in general and linked this development directly to Snowden's leaks.

But the report also revealed a dramatic increase in cybercrime. While in 2013, 26 percent of businesses were hit by e-crime, 2014 saw 40 percent affected, with financial services the most common victims, followed by the production industry. 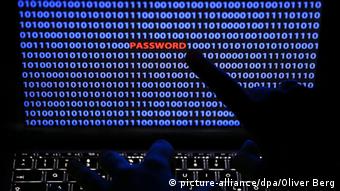 Cybercrime is on the rise - as is government surveillance

Many of these cyberattacks actually don't aim for the big shots. They hit small and midsize companies. Security firm Symantec found out that over a third of electronic criminal attacks target companies with less than 250 employees. Often the employees themselves are a weak link in the security system of networked companies.

Targeted emails laced with malware are used as a point of entry for criminals to access company networks, and in 2014, attackers used them to gain access to a German steel company and managed to destroy one of its furnaces.

Armin Simon is a manager at the data protection company Safenet and has noticed a major increase in demand for the services of his company. "In 1997, I had to explain to companies why they need firewalls. Today, I need to make sure they keep their encryption keys safe," he says. His best pitch hardly involves the product at all. His speech to visitors in the "business security forum" is more or less a summary of the biggest issues the world has learned from Snowden and Greenwald. He gets clients interested by telling them about Prism, Tempora, XKeyscore, and TreasureMap, as well as the most recently revealed government attack on a SIM card producer.

Simon's company offers encryption technology and works for a number of large firms, including the Swiss pharmaceutical firm Novartis and the data security company Verisign. Now, Safenet is being taken over by Gemalto, the SIM card company that targeted by government surveillance.

During his interview, Snowden spoke mainly about policy rather than business. He wants to return home to the United States, though he says he could not even get a fair trial procedurally due to regulations about classified information. His relations to Germany are also not the best. Even though he does not say it directly, he is clearly disappointed at the lack of support from the German government.

Glenn Greenwald is more strident in his criticism: "The countries that have benefited the most from the risks Edward has taken personally are the ones who most shamefully turned their backs on him to avoid even the slightest risk themselves," he says of the German refusal to consider granting asylum to Snowden.

At the close, Snowden addresses the audience with a warning. "All of you in this room, you are under attack," he says and explains that governments are not mainly looking to spy on terrorists, but on influencers. "You are under attack, because you have access to our infrastructure and to lots of people's data. This is a systematic attack on our infrastructure." Not only that, it is up to businesses to develop security measures for journalists and others to fight back.

Finally, the whistleblower promises to visit CeBIT in person if he ever gains his freedom. Then on second thoughts, he says, "well, maybe I better ask Angela Merkel if that's okay first," drawing laughter from the crowd.

Over 600 Chinese exhibitors showed off their latest gadgets this week at the world's largest I-T trade fair in the German city of Hanover. (18.03.2015)

Germany's startups are a big presence at this year's CeBIT technology fair. But despite the hype, many startups have trouble acquiring development funding, DW's Paul-Christian Britz says. (17.03.2015)

German cars and machinery are world-class. But as everything everywhere goes digital, what will become of German industry? Answers can be found at the CeBIT computer fair in Hanover - where the focus is on Industry 4.0. (16.03.2015)